Armenia Suspends Ties with Hungary Over Extradition of Azeri Murderer 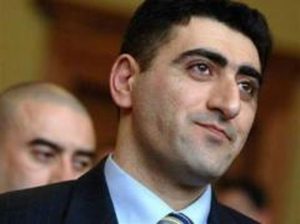 Safarov had confessed hacking to death the 26-year old Lt. Markarian while the latter was asleep in his dormitory room. Safarov and the victim were in Hungary for a NATO-sponsored Partnership for Peace English language courses in 2004. Safarov had struck Markaryan 16 times with an axe, almost decapitating him. Following the murder he had walked over to another Armenian officer’s room, hoping to commit a second murder, but had found his door locked. Safarov was found guilty of premeditated murder, and was sentenced to life in prison in April 2006, with possibility of parole after 30 years.

Azerbaijan’s Justice Ministry had assured officials in Hungary that Safarov would continue serving his sentence in Azerbaijan. However, hours after his arrival on an Azerbaijani Airways special flight, President Aliyev signed an order to pardon Safarov. The pardon is effective from the day of signing.

Safarov’s pardon contradicts the Azerbaijani criminal code, where prisoners serving a life sentence can only be freed after serving a period of 25 years, according to reports.

“This is restoration of justice,” Safarov told news reporters in Baku. “Though I have been staying in solitary confinement for eight years abroad, I have never lost my hope. When the time came, the Supreme Commander-in-Chief solved the issue. I’m ready to serve further my state and people.”

When asked about the murder, Safarov reportedly said, “I do not want to remember that day.”

Safarov, who said the pardon was a “surprise” to him, is now at his family house, where he is receiving visitors, according to Azerbaijani news reports.

Head of the Department of Presidential Administration for Work with Law-Enforcement Organizations Fuad Alasgarov told the Azeri news outlet APA that “this process [of extradition] was politicized in advance. The Armenian lobby was seriously preventing his extradition to Azerbaijan… Ramil’s return to Azerbaijan became possible due to the political will of the President, who always shows fidelity to principles for the protection of the rights and interests of the Azerbaijani citizens, and his personal influence in the international arena.”

Azerbaijani media and officials seem to offer Safarov’s “emotional state” as justification for his crime. “Ramil is from Jabrayil region, which is under occupation of Armenia. He lost his relatives and these events occurred in front of his eyes and remained in his childhood memory. He faced Armenian provocations during the NATO courses when Armenian officer insulted Azerbaijani flag and people. It is possible to conceive the emotional state of the person who saw such tragedies,” said Alasgarov, who added that President Aliyev “showed great humanism” in pardoning Safarov.

Hungary’s Justice Ministry said Safarov’s extradition was in line with the 1983 Strasbourg Convention on the Transfer of Sentenced Persons. Azerbaijan joined the convention in 2000.

Born in 1977, Safarov began his military career at a military school in Nakhichevan in 1991. According to Azerbaijani news outlets, he continued his military education in Izmir, Turkey, and later at Ankara’s Higher Military School. Returning to Azerbaijan, he continued his training, and rose up the ranks to Lieutenant. In January 2004, he enrolled at in the NATO English language program in Hungary, where he met Lt. Markaryan, and later killed him. 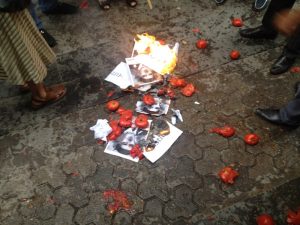 Protesters burned pictures of Safarov, and chucked tomatoes at the Hungarian embassy. (Photo shared on Twitter by @Vozni)

In his address to foreign diplomats, Sarkisian condemned Hungary’s action, and said that neither he nor his government will tolerate Hungary’s decision, and that the Armenian nation will never forgive them. “With their joint actions the authorities of Hungary and Azerbaijan have opened the door for the recurrence of such crimes. With this decision they convey a clear message to the butchers. The slaughterers hereafter are well aware of impunity they can enjoy for the murder driven by ethnic or religious hatred,” said Sarkisian.

News of Safarov’s extradition and pardon spread in Armenia, where protesters burned pictures of Safarov, and chucked tomatoes at the Hungarian embassy, according to reports.

The Armenian National Committee of America (ANCA) issued an action alert calling on concerned individuals to contact the Hungarian Embassy, expressing their outrage.