War and an energy crisis in the early 1990s compelled Armenians to cut down thousands of trees for firewood. The Armenia Tree Project is working to reforest Armenia, but illegal logging poses a major obstacle.

Mashtots is a typical neighborhood on the outskirts of Armenia’s capital Yerevan. On a recent Sunday night, children played in the asphalt streets as families gathered for the weekly khorovats, or barbecue. Serob Badalyan’s family didn’t think twice about using a pile of logs and some twigs to make their fire. But Badalyan, a 34-year-old engineer, remembered a period in the early 1990s when that would have been out of the question.

“The problem was, we didn’t have energy,” he told DW in an interview. “That’s why we were going out cutting trees. Sometimes we brought them home. Sometimes police arrested us and took away our saws. But then the next day we would go with our friends to bring wood home and have fire.”

The energy shortage was caused by war. Armenia and neighboring Azerbaijan fought from 1988 to 1994 over Nagorno-Karabakh, an enclave that Azerbaijan claimed as its own while the territory’s Armenian population wanted independence. Azerbaijan and its ally Turkey blockaded Armenia. Later on, the collapse of the Soviet Union ended energy subsidies to Armenia. The result was years of power shortages.

Yerevan saw below-freezing winter days with just one to two hours of power, and things were often worse outside the capital. Armenians were desperate and they took to the country’s forests for firewood. They burnt everything they find, including their own flooring and furniture. 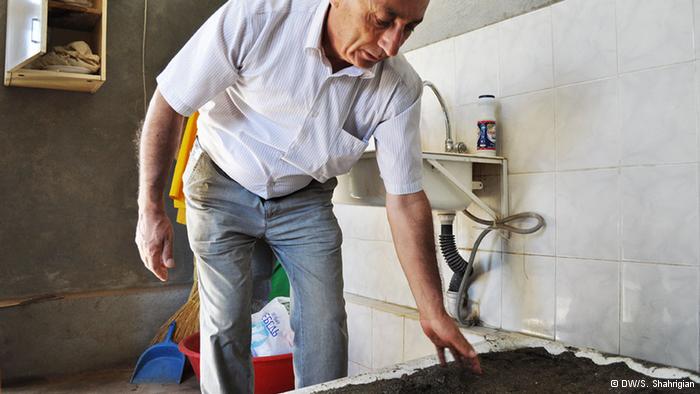 The nursery manager sifts through ATP’s prize possession: seeds for the next generation

Badalyan and his friends returned again and again to an apricot orchard in the Yerevan neighborhood of Daviteshan. “We were going in groups of five or six,” he said. “Each time, we would get wood for one of us, in order to have wood for a week-long period.”

Eventually, the Armenian government turned on a previously deactivated nuclear power plant in 1995. The move was controversial in its own right, but brought electricity back to the country.

Thousands of Armenia’s trees had been cut down. Illegal logging companies, which continue to operate, also sprang up. As a result, up to 30 percent of Armenian forests have been lost, according to a June report by the forest governance program ENPI FLEG, which is funded by the European Union and other organizations.

“Armenia could become a desert,” said Armine Tokhmakhyan of the Armenia Tree Project (ATP), an NGO dedicated to reforesting the country.

The organization has been trying to fight deforestation since 1994. Community outreach programs deliver trees to parks, schools, hospitals and other organizations that want to spruce up their premises. ATP is also trying to reforest wide swathes of land in provinces including northern Lori. The organization reports 80 percent survival rates for its plants – and says loggers have stayed away from their forests to date.

ATP grows their trees in three nurseries. DW visited their site in the town of Karin. Clusters of Soviet-era houses dot long stretches of dusty terrain leading out of the capital Yerevan. But the town of Karin is surprisingly lush.

“Most of our visitors write this is an oasis in the desert,” Tokhmakhyan said. “During our sixteen years of hard work, we managed to give a green look to the village.”

The village’s main street is lined with robust trees, and ATP’s nursery fills about a hectare in the center of town. More than 50 species of plants flourish there, including evergreens, fruit trees, maples, poplars, oaks and many kinds of shrubs. Most of the plants growing at the facility are native to Armenia, with nine of them in danger of going extinct, according to government scientists.

The government forestry agency, Hyantar, claims Armenia’s forests are as big as they were in 1988. The agency reported just 2,425 trees were illegally logged last year. But environmental activist Luba Balyan told DW that those figures are way off. In research for EPI FLEG, she found at least 240 thousand cubic meters of forest had been illegal logged last year. If her figures are correct, thousands more trees were lost than the government has registered.

“It’s quite a lot for Armenia, being the size of Maryland or Belgium,” she said. “The environmental implications have been really harsh. And number one is desertification. You’re losing the forest cover. You’re losing water. And that is a big problem.”

ATP’s nursery has a classroom dedicated to conservation

Balyan said most of the logging doesn’t come from villagers scraping for wood, but large companies that harvest wood en masse while the government turns a blind eye. Balyan added that those firms sell the wood to construction companies and furniture makers or import it abroad.

She has proposed several ways Armenia can reverse the trend, including strengthening Hyantar’s monitoring programs and updating the forest code to modern standards. For now, the energy crisis that sparked the deforestation is a distant memory to most Armenians.

As for the apricot orchard where Badalyan and his friends used to cut wood, the trees were never replaced.