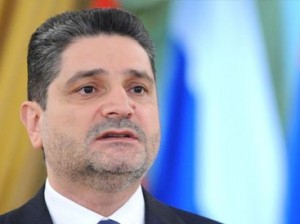 In early November, the government chaired by Prime Minister Tigran Sargsyan discussed the fight against corruption. An advisor to the president, Georgy Kutoyan, talked about the intensification of the government’s anti-corruption policy. Participants at the meeting proposed creating specialized working groups, which will identify the causes of corruption and ensure transparency of programs, and to engage civil society.

This meeting was preceded by a statement made by President Serzh Sargsyan on the need to intensify the fight against corruption. The president demanded that the government take decisive actions to ensure “tangible and visible” changes. After that, the head of the Cabinet of Ministers issued a call for cooperation with public and international organizations, as well as political forces, including the opposition, citing the need for a move to strengthen the fight against corruption.

Neither the “Prosperous Armenia” party nor the radical opposition party the Armenian National Congress (ANC) have responded to the prime minister’s invitation. Naira Zohrabyan, a member of Prosperous Armenia, said that the party will take part in a common fight if the government answers what talks given in front of people in rural areas cost the budget $16.6 million.

The ANC mentioned that corruption in Armenia is systemic, while the pyramid of corruption is identical to the pyramid of power, with Serge Sargsyan at its top. In these circumstances, the ANC refused to participate in the meeting, calling it a theatrical performance.

Indeed, in Armenia nowadays only a few believe in the desire of the authorities to fight corruption. The origins of mistrust lie in everyday life, where citizens face this phenomenon everywhere – from schools to hospitals. According to numerous polls, the population of Armenia considers police, courts and education to be the most corrupt spheres.

To better understand the policies pursued by the authorities in fighting corruption we should turn to the year 2004, when a special council to fight corruption, headed by the Prime Minister, was established by decree of President Robert Kocharyan. The council includes the Attorney General, the Minister of Justice and the head of the inspection service of the president. The council held 18 meetings at which it discussed the fight against corruption. However, neither Armenian society nor international organizations have seen any significant changes in this area. The fight against corruption was limited to statements of various kinds, long discussions and presentations of anti-corruption programs. This fundamental struggle affected only a few low level officials, doctors and university professors.

The line-up of the council also causes many question. It mostly consists of high-ranking officials, who are the owners of luxury villas, and have shops and real estate officially owned by other people.

Only in the last week, two opposition newspapers – “Fourth Despotism” and “Armenian Times” – have published a number of incriminating materials. According to one of them, a member of the council board, the head of the inspection service of the president, has acquired a large number of apartments in a luxury building in Yerevan by fraud. Another “fighter against corruption,” the Attorney General, was presented with an expensive Jeep. The head of the State Revenue Committee, Gagik Khachatryan, is the owner of an endless number of businesses, shops and cafes, as well as companies importing and manufacturing such products as “Apeiron”, “Megafut,” etc.

The press has repeatedly raised these issues. Similar findings have been published in WikiLeaks. However, none of those whose names are mentioned in numerous publications have attempted to refute this information, let alone go to court. Apparently, the law-enforcement agencies also have had no interest in this information.

The question of the Prosperous Armenia’s representative regarding the cost of lectures also remains unanswered. There are 900 villages in Armenia, which means each lecture must have cost a thousand dollars. However, this figure cannot justify the amount spent, even if the lectures were read by Nobel Prize recipients.

The director of the Armenian office of the organization “Transparency International”, Varuzhan Hoktanian, says new manifestations of corruption are being revealed in the world – “elite” corruption, which also exists in Armenia, where the political elite is considered to be above the law. Research conducted in 2010 and 2011 shows that Armenia is 129th to 133rd in terms of elite corruption out of 180 countries. At the core of elite corruption is the systemic corruption in its so-called hierarchical manifestation. It perpetrates a vicious circle.

And one more important detail: the council for the fight against corruption ceased meeting two years ago. How was it that the government has suddenly remembered about this institution? The answer is clear. The presidential election is taking place soon and it is important to actualize what society is mostly concerned with. However, in reality the “new wave of fighting corruption” has become a failed attempt at populism or a show lacking intrigue.