Armenia, China, Russia, and U.S. in the Lead at Chess Olympiad

The Armenian team during Round 6 (Photo by Arman Karakhanyan)

ISTANBUL, Turkey (A.W.)—With two rounds to go, Armenia shares the lead with China, Russia, and the U.S. at the Chess Olympiad currently underway in Istanbul.

Armenia defeated Germany 2.5-1.5 in the ninth round to climb to the top of the standings with 15 points. The U.S. in turn defeated number one seeds Russia 2.5-1.5, while China demolished the Philippines 3.5-0.5.

In Round 10, which will take place tomorrow, Sept. 6, Armenia will play The Netherlands, Russia will take on Argentina, while China and the U.S. will face off in the toughest match of the day.

Armenia has emerged victorious from seven out of nine matches so far. It has only lost to China and drew its match against Russia.

Organized by the International Chess Federation (FIDE), the Olympiad is the most prestigious team competition in the chess world.

The top-seeds are Russia, Ukraine, Armenia, Hungary, Azerbaijan, China, and the U.S. respectively.

A number of Armenian chess players are representing other countries. Most notable among them is Varuzhan Akobian, who is part of the U.S. team, and Krikor Sevag Mekhitarian, on the Brazilian team. 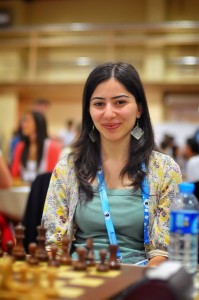 The Armenian women’s team is sixth after nine rounds. China leads with 16 points, Russia is second with 15. The Ukraine, Kazakhstan, Poland, and Armenia are 3-6 respectively, all with 14 points.

Several other Armenians in the women’s section are representing other countries. Natalia Khoudgarian, for example, heads the Canadian women’s team.

The Olympiad comprises of 11 rounds, and will conclude on Sept. 10.

The Armenian Weekly has been providing up-to-the-minute results on its Facebook page, and detailed coverage on its website.