500 Years: A Celebration of Ink and Paper and Glue

No one is ever going to confuse the Madenataran with the local neighborhood bookstore. It sits on a hill in downtown Yerevan, a massive, 122-thousand-square-foot block of marble and basalt, its entrance shielded by statues of Armenian mathematicians, historians, theologians, and the creator of the Armenian alphabet, Saint Mesrob Mashdots. As many readers of this newspaper know, it’s impressive and regal and—unlike a lot of mid-20th-century Soviet architectural behemoths—imposing and welcoming at once.

And yet the Madenataran is filled with nothing but books. It’s Armenia’s Institute for Ancient Manuscripts, a museum of very—and I mean very—old books. When I was in Armenia in May, it was the second place I visited. (The first was the Armenian Genocide Memorial, where, beside the eternal flame, I laid flowers in remembrance of our ancestors who were killed in the genocide.) I don’t read Armenian and I’m certainly no scholar when it comes to illuminated manuscripts, but even now, well into the digital age, I am still drawn to the paper book. Consequently, I spent an afternoon at the Madenataran peering through glass at manuscripts and Bibles and books, some made of parchment and some made of paper, some copied by hand, and some printed by presses. I was dazzled.

This marks the 500th anniversary of Armenian printing. The first tome? The Book of Fridays, a prayer book printed using red and black inks in Venice in 1512. The second book published in Armenian? The Bible. Fittingly, UNESCO has selected Yerevan its World Book Capital for this year. Meanwhile, in Washington, D.C., Levon Avdoyan prepared a magnificent exhibition of Armenian manuscripts and books—and record albums—at the Library of Congress to celebrate the Armenian literary tradition. The exhibit, “To Know Wisdom and Tradition,” is a gem. I went there, too. It runs through September 26. 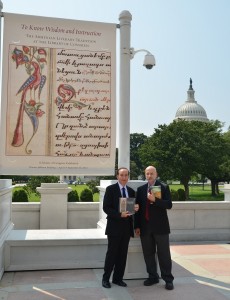 The author (L) with Prof. Levon Avdoyan in front of the Library of Congress exhibit poster (Photo by Garen Bostanian)

The books in the Madenataran and on display at the Library of Congress are eye candy for a reader. This is true whether you prefer books made of pulp and ink or glue, or you’ve chosen instead an eReader. The reality is that anyone who loves books understands that we have a profound, totemic relationship with paper: to the book as an artifact. In the library in my house in which I write, there are two walls of books. There could easily be four, but the room is a corner that once was a living room, and so there are also two walls of windows. I can swivel in my chair and glance at the dust jacket of most of the books on those shelves and tell you where I was when I first cracked the book’s spine. Ian McEwan’s Atonement is the grass beneath a maple tree outside a health and fitness club in Middlebury, Vt., the leaves unfurling in the April sun; inside, my young daughter is in the midst of one of her dance classes. Henry Roth’s Call it Sleep is the snack bar at Smith College, where my wife went to school when we were merely boyfriend and girlfriend, and the smell of the onions the cooks there placed on the hamburgers. And Franz Werfel’s magisterial epic The Forty Days of Musa Dagh is the wood-paneled living room of my childhood home in Stamford, Conn., and my dawning awareness that there was more to my Armenian grandparents’ lives as children and young adults than they ever were likely to share. Knowing of my profound love for The Forty Days of Musa Dagh and of books made of paper, the Christmas before last, my wife found me a beautiful first edition of the novel.

The truth is, a book’s dust jacket or spine can instantly catapult us back in time. We don’t merely recall the novel’s plot or a snippet of dialogue: We remember who we were, where we were, and, perhaps, the state of our lives when we first met Atticus Finch or Daisy Buchanan or Gabriel Bagradian. A book is like music in that regard: It can resurrect memories for us.

My new novel, The Sandcastle Girls, is set mostly in Turkey and Syria in the midst of the Armenian Genocide in the First World War, but there are a few moments in Yerevan. The novel is a love story, but it is also the story of our diaspora—why of the 10 million Armenians in this world, only 3 million live in Armenia today.

And the physical book itself—the paper and the ink and the cloth—is beautiful. I’m not referring to the text or a single word I wrote. I’m talking about the design. The type. The feel. Doubleday designed and produced a physically alluring book. Raised lettering on the cover and the spine. An elegant juxtaposition of gold and black. Deckle edge pages. A cover image that is wistful and epic and, in my opinion, captures perfectly the sensibility of the novel. This is my 15th book, so I can be pretty jaded when my editor sends me a new one hot off the presses. Been there, done that.

Nope. Not this time.

When a copy of The Sandcastle Girls first arrived at my house in Vermont, I found myself holding it in my hands and recalling the day I had written the book’s first sentence. And I thought of my recent visit to the Madenataran, and the spectacular care that someone had put into the production of each and every book and manuscript there. No one planned to coincide the publication of The Sandcastle Girls with the 500th anniversary of Armenian printing or the UNESCO selection of Yerevan as the 2012 World Book Capital.

But this novel is the most personal and the most important book I’ve written. Its arrival this year is a great, great gift.