Much has been said about the need to help Javakhk, but little is known about the realities and conditions under which the local Armenians live. On a steamy June morning in Yerevan, I embarked on an unforgettable journey to this region and among the courageous Armenians who call Javakhk their home.

My guide is Dr. Vahe Sargsyan, historian, political analyst, and proud son of Javakhk. I first met Vahe in 2007 during a visit to Armenia. At the time he had just published his first book on the history of Javakhk. Now working and living in Yerevan, Vahe regularly takes time off to visit his childhood home in the village of Ghado and spend time with his elderly father Davit. 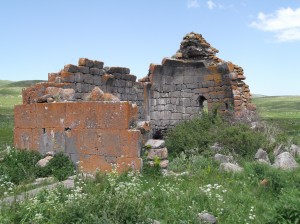 The journey through northern Armenia is long, and while the roads are worn, the beauty of the green mountain landscape decorated with the purples, reds, and yellows of wild flowers makes the trip enjoyable. The old blue bus driving us to Javakhk is packed full of Javakhk locals heading home to the cities and villages of their mountainous homeland.

The historically Armenian populated region of Javakhk is pinned between the Georgian capital of Tbilisi, the Republic of Armenia, and Turkey. While the exact number of Armenians living in Javakhk is not known, it is estimated to be anywhere between 100,000 and 200,000.

It takes us five hours to reach the Javakhk border. The first town we pass through is Ninotsminda. Founded by the Russians in the late 19th century the former imperial border-town remains populated by Armenians. As we pass through, however, we see little evidence of an Armenian presence. Not a single street name, shop sign, or poster is written in Armenian.

From Ninotsminda along the road to Akhalkalak, major construction is underway on a new rail-line. According to Vahe the rail-line is part of the Azerbaijan-Georgia-Turkey rail network, bypassing Armenia. Once complete, the rail-line will cement Armenia’s economic isolation. Equally concerning, however, is the Turkish ownership of the infrastructure and the presence of Turkish workers brought in to live amongst the Armenian population of Javakhk. 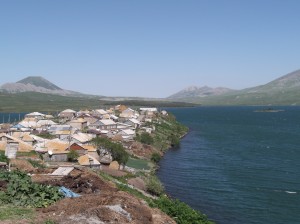 Further north as we draw nearer to Ghado, the asphalt turns to dirt. The final few kilometers of rocky road lengthen our travel time quite substantially. There is little Georgian government investment here in Javakhk’s northern villages, and this has a major impact on the economic potential of the Armenian population.

In Ghado, Vahe introduces me to his father Davit who, despite his limp and walking stick, attempts to carry my bags into his home.

Davit lives alone. His eldest, Vahe, is already spending most of his time in Yerevan while his wife Varduhi is away helping their youngest son Gagik, who recently found work in Russia. This is typical of the circumstances of many. The limited commercial opportunities are leading to the depopulation of the Armenian villages of Javakhk.

While having lunch made with fresh potatoes, tomatoes, and herbs from Davit’s garden-farm, we sketch out our plan for the day. We decide to first visit a nearby Armenian church then move through the mountain villages to Lake Dapadzghour.

When I ask if I can see the local Armenian school and speak with the principal, Davit’s response is a confused “no.”

“The principals at our schools won’t speak the truth with you, they are afraid of losing their jobs.”

“Varduhi was educated at Yerevan State University. She taught Armenian at the local school here for 32 years and ‘they’ dismissed her.”

“The children used to learn Armenian language, literature, culture, history, there’s none of that now,” says Davit, shaking his head.

The Georgian government has implemented a policy that has resulted in the mass dismissal of Armenian teachers from the local schools and replaced them with “Georgian language experts” from Tbilisi. Needless to say, these “experts” are neither familiar with the culture and history of the Armenian people, nor do they speak the language.

We jump in Davit’s car and drive a short while up the mountainside to Garmir Jham. Striking red in color, this small ruined Armenian church is surrounded by lush green grass and tall trees. A narrow spring runs by. It once brought fresh water to the now-destroyed village built around the church. Directly opposite in the distance stands the proud Mt. Abul, snow-capped and multi-peaked, it is Javakhk’s tallest mountain.

“This church dates back to either the 11th or 13th centuries,” says Vahe.

“The Lezgis [a Caucasian people] invaded in the 17th century and razed this village to the ground.”

After refreshing with a cool drink from the cold spring we press on by four-wheel drive, bouncing along the rocky road, toward Dapadzghour. When Dapadzghour appears in the mountains, I understand exactly why Davit and Vahe insisted I see this place.

On the narrow peninsula of a brilliant blue lake are the single-story stone houses of Dapadzghour. The natural beauty is breathtaking. Quiet and isolated it feels as though clocks tick just a little bit slower in this village…

But Dapadzghour has a secret: Just beyond the village passes the Trans-Caspian Gas Pipeline. Built to transfer Azeri Natural Gas to Turkey and beyond, this is the second piece of infrastructure we see that intentionally isolates the Republic of Armenia. Apart from providing employment to one villager, responsible for pipeline security, it has no benefit for the local Armenian population of Dapadzghour.

The next morning, Vahe takes me to the Valley of the Kings where I become witness to the rich history and culture of Javakhk. Following the road along the river we see ancient Armenian churches and castles. But the villages of this mountain pass are mixed; Georgians, Ajars, and Armenians now live in this region.

It is here that we pass the torn up mountainside where Turkish companies and workers are building hydroelectricity power stations. These projects are not an initiative of the local Javakhk people, nor is there any evidence that the benefits of this infrastructure will be enjoyed by the locals.

Returning along the same river road we come to Akhalkalak, the capital of Javakhk. A center for trade and culture, it is impossible for anyone to deny the Armenian essence of this city. At one end of the small hrabarag is a garden full of Armenian monuments. At the other end is the 19th-century Holy Cross Armenian Church and in the center stands a statue of St. Mesrob Mashdots holding the 36 original letters of the Armenian alphabet.

But all is not as it seems.

Only the old Soviet era street signs are in Armenian, the new ones are in Georgian. Few of the street vendors have chosen to display new Armenian shop signs; they have selected the Georgian script instead. The old Armenian university campus is small and its expansion is impeded, while a brand new multi-story Georgian university is being constructed just down the road.

Evidently, Georgian influence is changing the Armenian character of Akhalkalak and Javakhk.

As our time in Javakhk is reaching an end and we begin heading to the Armenian border, I reflect upon the experience I’ve just had and the issues that confront the Javakhk Armenians on a daily basis.

Javakhk’s population is facing difficult socio-economic conditions. The roads are of poor quality, there is little employment, and commerce is limited. Added to this, the Armenians of Javakhk are being asked to forego their native language in preference for Georgian; their schools no longer give them the cultural education they are entitled to; and a whole new generation is finding it harder to remain Armenian in a historically Armenian populated region.

While a solution to the problems encountered by Javakhk’s Armenians today is a complex one, Davit provides some insight. When I ask him what would make him stay here in Javakhk despite the hardships he faces, Davit says, “We just need to be allowed to be ourselves and to have a greater say in the decisions that impact us.”