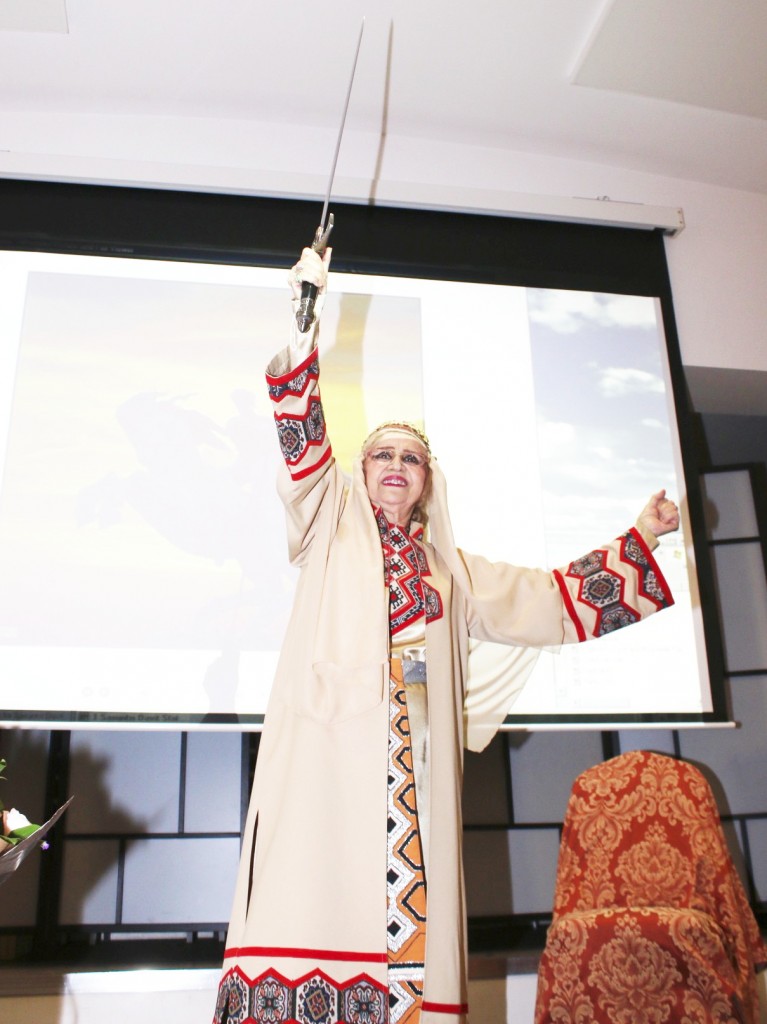 :: On the 12th December 2015 at London’s Navasartian Hall, Mrs. Jenia Nersisian, one of the most loved actors in Armenia and the Diaspora, dedicated her theatrical representation of David of Sasoun to the 100th Anniversary of the Armenian Genocide, and equally to those glorious Heroes of the past, who fought for the independence, dignity and self-determination of the Armenian nation.

This emotionally charged evening was organised by the Heritage and Cultural Committee of the Armenian Community Council of the United Kingdom and the Tahta Armenian Community Sunday School. Headmistress of the School Mrs. Ruzanna Tatulian and her dedicated staff encouraged and supported Mrs. Jenia Nersisian to bring her imaginative recital to a wider audience in London. Mr. Raffi Sarkissian, member of ACC, welcomed the public to the final event of this memorial year and introduced the celebrated actress.

“It has been a very long time, since I wanted to realise this project”, said Mrs. Nersisian after her passionate and emotional performance. “I felt it was the right time to do it now, in order to remind ourselves about our glorious heroes who fought and died selflessly, young people now need to know about them”. 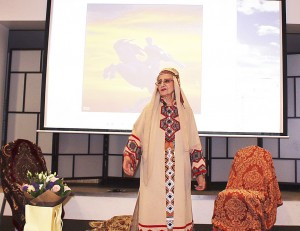 Dressed in a traditional, festive gold and red costume with matching Armenian head cover, the 84-year- young actress performed over an hour the entire poem of Hovhannes Tumanian, without any break. Mrs. Nersisian’s talent and captivating stage presence seems growing and rather than fading with age. Her vitality, dazzling memory, sense of humour and unstoppable drive to perform are truly inspiring. In absence of Armenian theatre, director or supporting actors in London, Mrs. Nersisian has become the Armenian theatre, the director and supporting actors herself. The performance was staged, directed and acted by Mrs. Nersisian alone: without any props, in front of her audience, she was transforming into numerous characters one after the other: David, then uncle, then mother, then soldiers, then enemy tyrant Msra Melik and on and on.

The skilful use of images in the background representing Armenian famous paintings of old battles, sculptures and landscapes supported her narrative. Equally discerning was the use of well-known classical music by Beethoven, Bach, Khatchaturian, Mansourian and others which emphasized the changing moods of her recital: the gravity of the battlefields or the jubilant disposition of the victories of David of Sasoun. Mrs. Nersisian equally managed to create a symbolic stage setting and decor with just two armchairs – one covered with ancient Armenian carpet, the other with Islamic carpet; couple of candles; few different hair covers to change on the spot into an old woman, a man, a warrior; as well as a sword that David of Sasoun is told to have inherited from his late father, that he carried in his victorious battles against foreign invaders.

David of Sasoun epic legend dates back to the 8th century, and is the Armenian Odyssey, which has been orally retold from generation to generation until it was transcribed at the end of the 19th century. Great Armenian poet Hovhannes Tumanian’s version has become one of the most studied and treasured poems of old and young generations with its optimism, humour, human and lyrical splendour. These qualities of Tumanian’s masterpiece are particularly close to Mrs. Janya Nersisian, the actress and the patriot.

Tumanian’s version of national epic poem is utterly heroic and masculine at the same time, perhaps more suited to a male actor than to a frail, delicate actress. Yet this is a pure misconception: Mrs. Nersisian’s talent and her ability to hold the attention of the audiences from the first moment to the last, made everyone forget about her gentle nature. As the performance progressed, the public perceived the utmost strength and determination of Mrs. Nersisian’s timeless talent.

Mrs. Jenia Nersisian was born in Yerevan, and as a six-year-old girl had witnessed her father taken away from their home, arrested in 1937 in Stalin’s “Great Terror” year and stayed in Siberia for twenty years. She was determined to become actress and against the will of her big brother, graduated from the State Theatre Institute. She joined Yerevan State Theatre for Young Spectator, which seemed to match with her vivacious, energetic character and infectious laughter in comedies targeted mostly to younger audiences. Mrs. Nersisian was awarded the title of Popular Artist of Armenia in 1975, and interpreted over 150 roles in her theatre, on TV and Radio theatre productions.

Since 1993 Mrs. Jenya Nersisian lives in the United Kingdom, where she has taught drama and Armenian language at Tahta Armenian Sunday School. However, the actress has not retired from stage, on the contrary, in the past decade she has chosen in more dramatic plays, such as “Suddenly Last Summer” in 2006 by great dramatist Tennessee Williams, “American Dream” by American playwright Edward Albee in 2007 and a monodrama co-written with her granddaughter entitled “Between Love and Solitude” dedicated to William Shakespeare’s wife, Anne Hathaway. Mrs. Jenia Nersisian presented her monodrama during the International Shakespeare Festival in Yerevan in 2007, and received warm welcome and special Prize.

“This was an extremely demanding role and a huge responsibility” said Mrs. Jenia Nersisian during our conversation. “I had to research thoroughly the biography of the great English playwright, in order to understand how to interpret the role of his ageing wife whose husband was the greatest writer of all times, yet she could not read and write. Shakespeare left their home for 25 years to seek fame and fortune, and Anne Hathaway raised their children on her own, they lost their son at the age of eight. The play is about the tormented loneliness of this woman and her silent devotion to William”.

In 2011 Mrs. Jenia Nersisian received Gold Medal of the Ministry of Culture of the Republic of Armenia and in 2012 she was awarded “Movses Khorenatsi” medal from the President of Armenia for her contributions to national theatre.

It is commendable that at 84 Mrs. Jenia Nersisian continues to give love to her audiences and gets back plenty of love in return. Her latest monodrama David of Sasoun was an undeniable proof that Mrs. Nersisian is still at the top of her game. 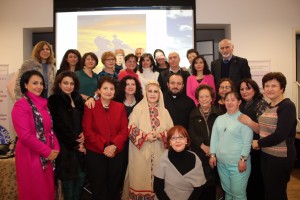 At the end of her performance, Mrs. Nersisian thanked all the past and present heroes in the name of David of Sasoun who have defended and liberated their old homeland from brutal invaders. In our turn, we are most grateful to Mrs. Jenia Nersisian for her enduring talent and dedication to art. After all, Armenian nation would not be here today without its ancient culture and artistic heritage, and there would be nothing for our heroes, like David of Sasoun, to protect for future generations.

Thank you, Mrs. Jenia Nersisian, let your on and off-stage laughter, love and optimism continue to brighten up the gloomy days for many more years to come.