Students last month at the Patriarch Vasgen elementary school learned to play chess, which is compulsory in Armenian schools.

YEREVAN, Armenia—Reporters stake out Tigran Petrosian’s home. Fans seek his autograph. His image is splashed across magazine covers, and his youthful face beams from posters on teenagers’ walls.

The sturdy 28-year-old isn’t a star athlete or a movie star. He is a chess grandmaster. In this chess-crazy country, that makes him a king among pawns.

“Chess here is like soccer in Brazil or football in America,” Mr. Petrosian said over coffee at the Yerevan Chess Academy ahead of a concert to honor the country’s top players. The concert featured musicians and singers performing in front of 10-foot-high chess boards while the audience clapped rapturously.

Mr. Petrosian—whose father named him Tigran after a former chess champion with the same surname—is one of a legion of top chess players that have catapulted this poor nation of three million into world beaters on the 64-square board. In September, he was part of the five-man squad that claimed Armenia’s second consecutive gold medal at the World Chess Olympiad.

Being good in chess carries big benefits in Armenia. Top players say they struggle to be allowed to pay for gasoline or parking. Restaurant bills sometimes never materialize when they go out to eat.

“Some girls giggle when they see us on the streets and some even give me presents,” says 30-year-old Levon Aronian, Armenia’s No. 1 player and the second-ranked player in the world. “Most of us are just regular nerds, so it’s quite a lot to get used to. I’ve changed the way I dress for photo shoots but that’s all.”

Armenia’s veneration of its chess players recalls a bygone era when the game produced a series of global household names.

In a Cold War grudge match that captivated audiences world-wide, American Bobby Fischer in 1972 broke Soviet dominance by beating champion Boris Spassky. Chess is still popular across much of the former Soviet Union, a legacy of Moscow’s patronage of a game it said demonstrated its intellectual superiority over the West.

But whereas chess players are on their own in many Soviet spinoffs, they still have full state support in Armenia. The country’s president, Serzh Sargsyan, also is the president of the Armenian Chess Federation.

In September 2011, his government passed legislation that made chess compulsory in schools. Promising players get free training at elite chess academies. The state pays for children to play in foreign championships and pays a salary to all grandmasters. 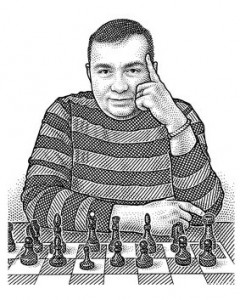 Mr. Sargsyan hailed a “golden age” for Armenian chess in a speech earlier this year. “It continues to inspire our society with belief in its own strength and self-confidence,” he said.

Armenia’s love affair with the game is less than half a century old. The country caught the chess bug on May 20, 1963, when 33-year-old Tigran Petrosian, no relation to the current player, dethroned reigning world champion Mikhail Botvinnik, a Soviet, over a grinding 24-game match.

Nicknamed “Iron Tigran” because of his impenetrable defense, Mr. Petrosian’s victory made him a national hero. Thousands of families named their children Tigran in his honor.

At the Patriarch Vasgen elementary school in Yerevan’s northern suburbs, aspiring grandmasters daily squeeze into the chess room: a makeshift shrine adorned with the sober faces of former champions and half a dozen huge magnetic boards showcasing the game’s most celebrated offensive and defensive plays.

All boards, pieces and textbooks are provided by the government. The children switch between theory and practice and sit through a written test every two months. The teacher, Marina Kamalyan, a frizzy-haired chess evangelist who plays online late most nights, insists on total dedication from the pupils.

“Chess is a real passion that is a metaphor for life. Education is a very important part of our mentality in Armenia, and I want to pass on this passion to the children,” Mrs. Kamalyan said as she moved white pieces into an unassailable position on one of the class’s wall-mounted magnetic boards.

Many of these children are already veterans, but they are determined to join Armenia’s top players as world beaters.

“I want to be world champion. Grandmaster is not good enough,” says 9-year-old Yervan Davtyan, after thrashing a reporter in a game lasting less than 15 minutes.

“I taught my mother how to play better, but I didn’t show her all the secrets because I want to be the best,” adds 8-year-old Julia Hakobyan.

Write to Joe Parkinson at joe.parkinson@dowjones.com