They call this section of the Artsakh-Azerbaijani border “the whore’s fishnet stockings”. It was the site of fierce battles during the war and both sides suffered heavy losses.

The bloodiest was in 1994. Azeri artillery shells and mortars turned the area into a series of crisscrossing pot marks resembling fishnet stockings. In Yerevan back in the 1990s, those stockings were in fashion, especially with women plying the oldest profession the world has known – prostitution. You could walk around the Circus in the evening hours and bump into many such ladies soliciting physical favors.

One of the guys, when describing the area, likened it to a pair of fishnet stockings. The name stuck and this most dangerous part of the border goes by the moniker until today.

Many in Armenia and Artsakh have heard stories about the area, the battles fought and those who perished. Only 30 meters separates Armenian soldiers from their Azerbaijani counterparts on the other side. When I stood at the Armenian observation post and looked across to the Azeri outpost, I could swear that they were looking back at me. The feeling made me queasy and I squinted for a better look. I told the commander what I had just experienced and he chortled, “Many others have experienced the same feeling.”

From a distance, “Whore’s fishnets” sticks out in the middle of a field. The uncultivated lands of the villages of Chaylou and Talish are on either side. Before the war the area was verdant and well irrigated. No water flows here today and the land is covered with yellowing grass.

The heights have been divided by the Armenian and Azerbaijani forces. Opposing trenches line the area.

During my visit I didn’t come across any soldier you could call big-headed or arrogant. I thought to myself that they all should be given a medal. Nobody writes about this type of soldier and they themselves aren’t the talkative type.

“Any nation would be jealous of such soldiers,” added Division Commander Kamo Vardanyan.

I start talking to the soldiers who hail from various places. On the frontlines, you mostly meet with guys from the lower economic class. The fathers of a few of them have left for work abroad. I don’t know why but whenever I meet such guys on the frontlines I know our borders are secure. “Thank God the sons of government officials aren’t here, they’d make a mess of things,” I think to myself.

The Azerbaijani national hero Moubariz Ibrahimov was “born” in “Whore’s Fishnets”. He was killed right here in a diversionary manoeuvre in July of 2010. Baku awarded him with the decoration of “National Hero” for exceptional bravery in the defense of Azerbaijan’s independence and territorial integrity. The Armenian soldier Artak Ghabouzyan killed Ibrahimov in the defense of Artsakh’s independence and territorial integrity. Ghabouzyan was awarded the Medal of Courage by the President of Armenia and Military Service Medal by the President of Artsakh. The Armenian government also allocated a 3 room apartment to the five member Ghabouzyan family.

The mountains and forests are visible in the distance. Opposite me is a flat stretch of open land, dusty and yellowing under the sweltering July sun.

Not far from here was here the guys from the Arabo brigade got caught in a trap. On a road leading here was where “Yura 26” ran over a landmine. Hundreds gave their lives in “Whore’s Fishnets” and its environs. 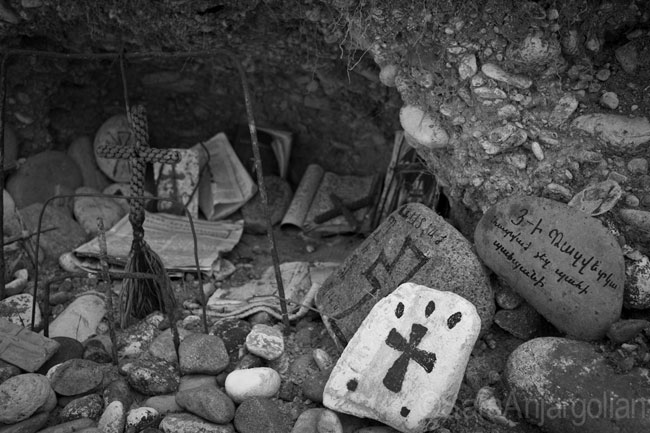 There’s a tiny section of the frontline position they call “Holy Corner”. All the guys serving here have placed an item of reverence inside. Battalion Commander Artour Mkrtchyan has served here for six years. After graduating from the Vazgen Sargsyan Military Institute he was posted here. Like his soldiers, he’s not much of a talker. On one of the boulders in the Holy Corner I read the inscription, “God save the 3rd Reconnaissance Unit”. Usually, before any operation, the guys assemble here for a minute of silent prayer and reflection. 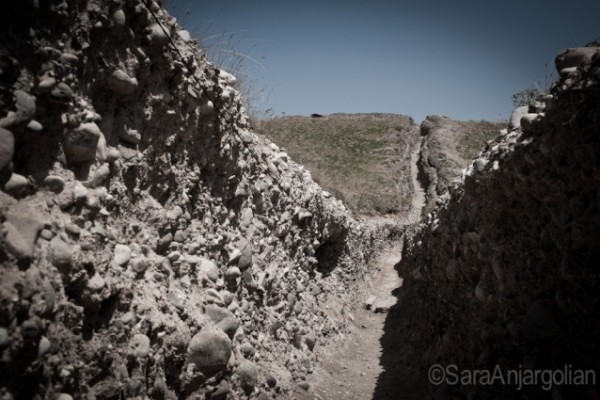 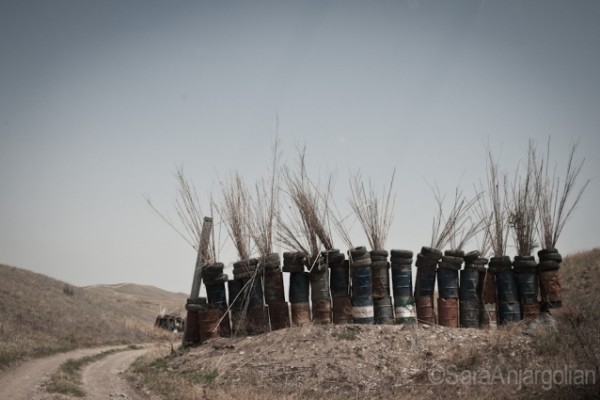 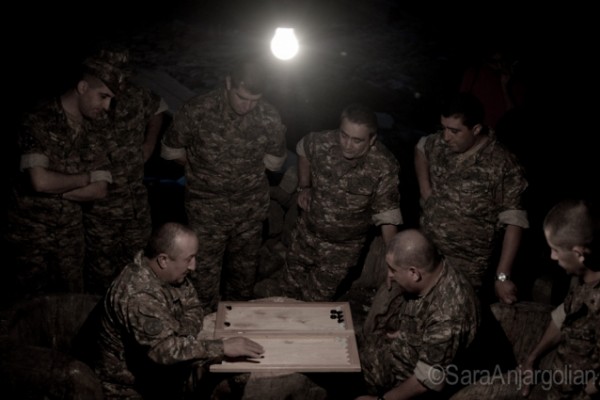 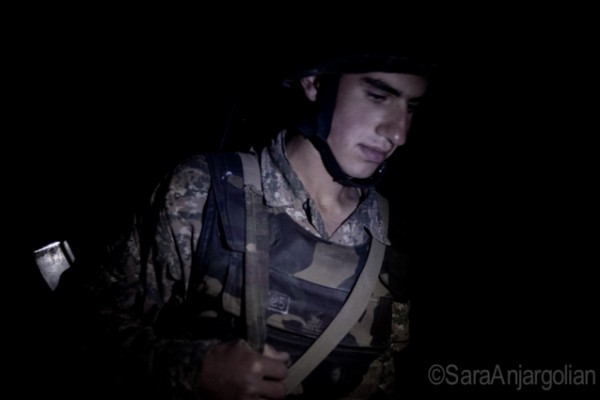 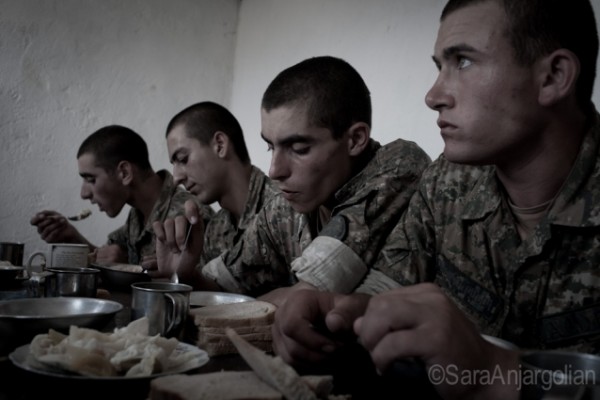 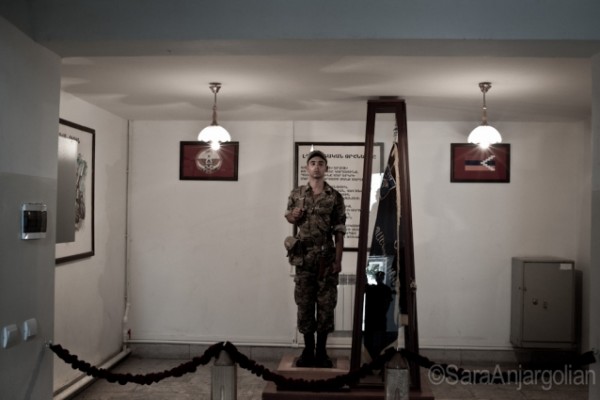 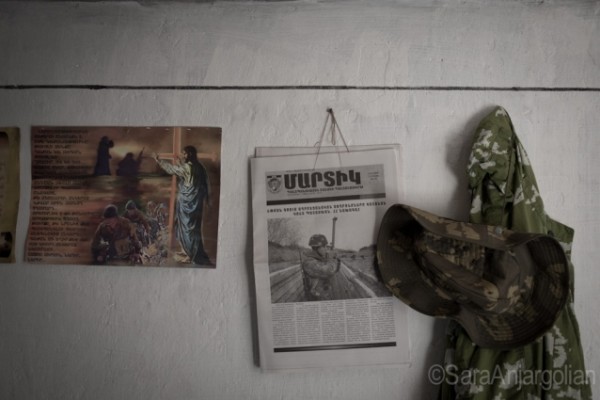 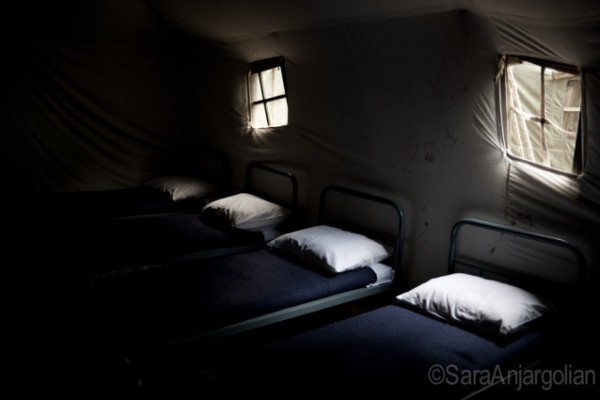 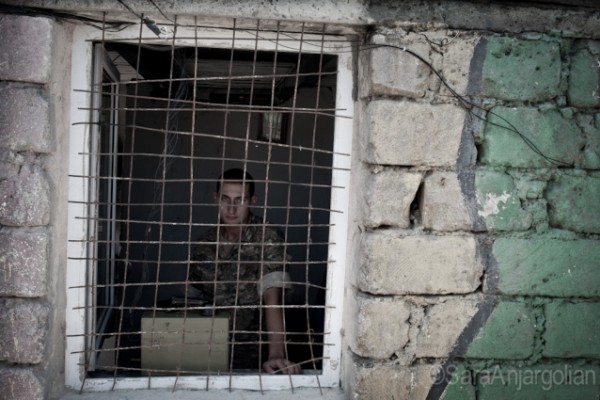 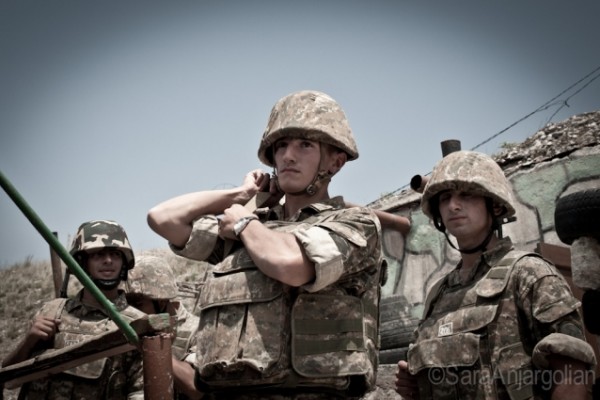 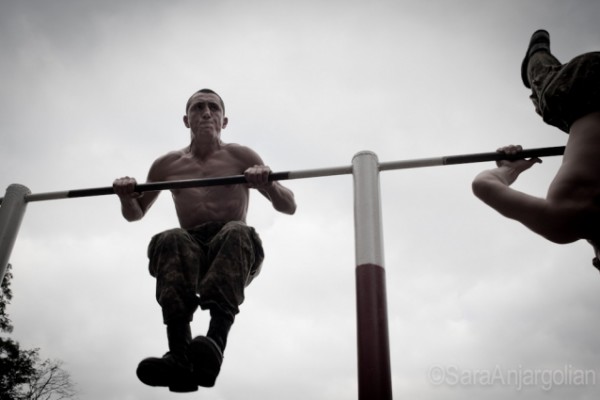 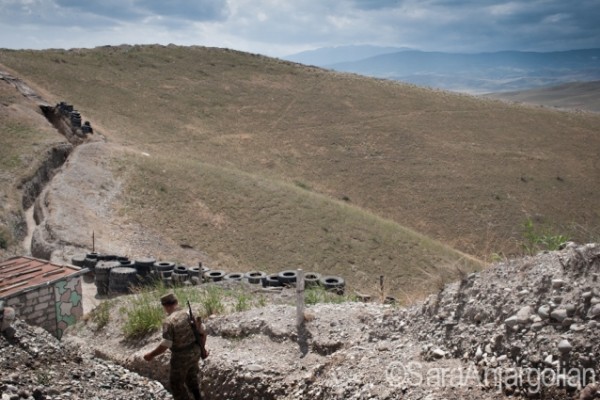 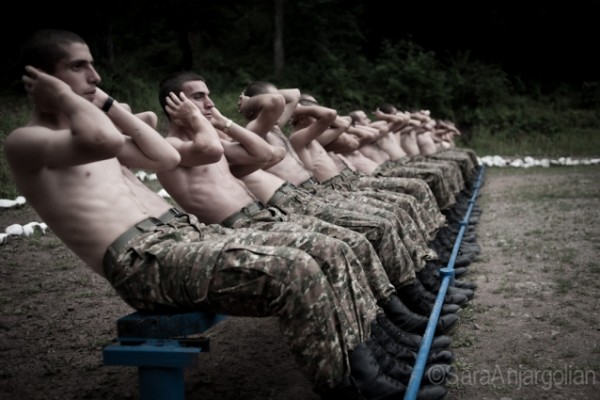 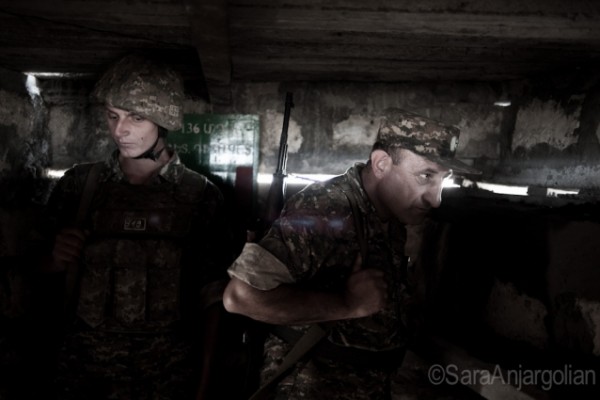 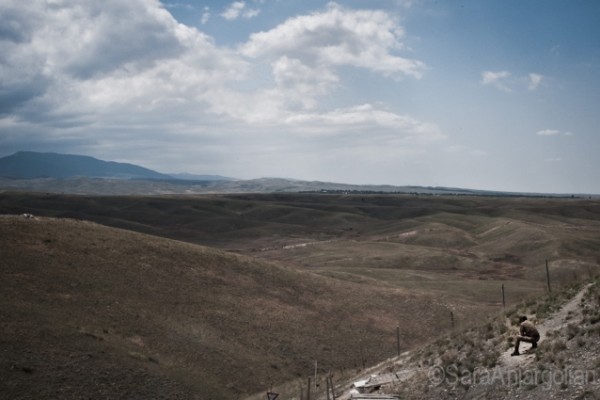 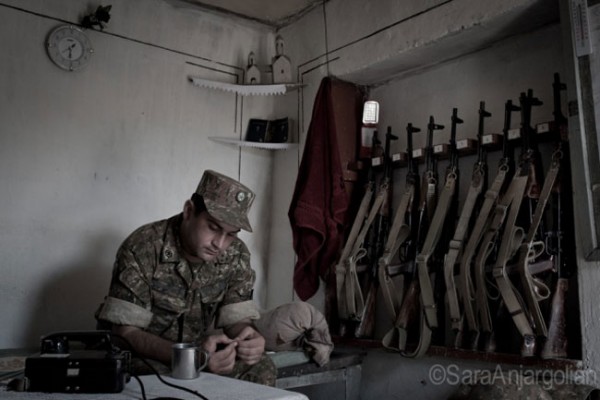 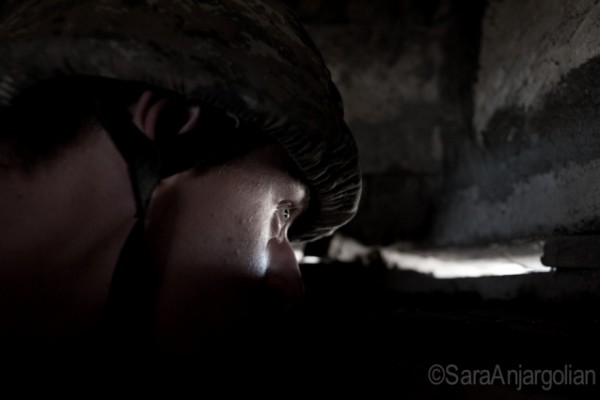 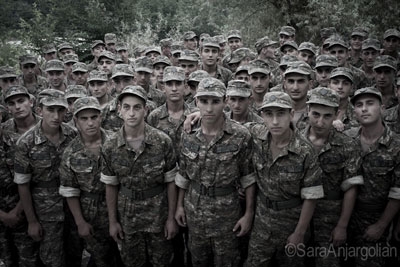 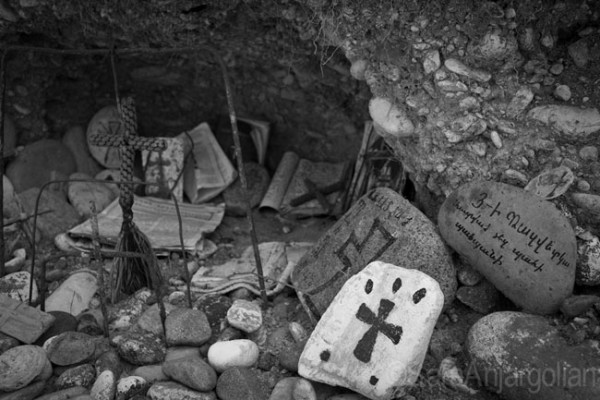 Arman is from the village of Voskevaz. He’s been in the army for a year. For two weeks he stationed at the frontline unit then goes back to the base for two weeks. Arman just returned from vacation. He’s a tall guy who sometimes has to duck down in the trenches. He too doesn’t speak much.

“Isn’t it difficult serving here?” I ask. “You get used to the hardships,” Arman replies, never taking his eyes off the line of sight. I get the feeling that all my questions are preventing them from concentrating on their assigned tasks.

Alik Sargsyan, an operational assistant to the commander, is directing activities in the post. His jeep cuts across the field at a fast clip leaving a cloud of dust behind. Nobody drives slowly around here. Sargsyan tells me that in spots they are vulnerable and that’s why they make haste.

“These are vital lands for the future,” Sargsyan says, looking towards the flat expanse. I don’t know if he is referring to the lands on either side of the road or the prairie stretching out in the distance. He periodically warns us not to take any photos of the area.

In the time it takes us to reach the frontline units, Sargsyan has managed to provide us with a concise history of the Artsakh movement from its origins right up till today.

Sargsyan relates how he joined the student movement and then was arrested by Soviet Army soldiers and handed over to the Azerbaijani OMON (Special Purpose Mobile Unit). He was held captive for one and a half years and was later released in a prisoner exchange.

“This is my land and I defend it. There is no other formula,” Sargsyan says, adding that Interpol is after him but he doesn’t know why.

Sargsyan argues that Shahoumyan and Martakert fell due to internal political squabbles in 1992 and not due to the military might of the enemy.

It’s late at night and we head up to see Tigran at one of the Yeghnik posts. He’s sleeping in the billet. All he gets is two hours of rest and then it’s back to his patrol duties.

One of the guys tries to jostle him awake but it’s no use. Tigran just turns to the other side and continues to snooze.

It’s pitch black all around us. I exchange a few pleasantries with the soldiers and then bid them farewell.

As I turn to leave, I whisper, “God protect all of you”