Where Do We Go from Here? Notes from a ‘Tourist’ in Diyarbakir

The Turkish version of the following article appeared in the July 20, 2012 issue of Ozgur Haber, a daily newspaper published in Diyarbakir/Dikranagerd.

I sit in my room, in Diyarbakir’s old Deliller Kervansaray. I draw the curtains shut, and lay down on my belly. I am content in my temporary seclusion, hidden from the bustling city’s distractions. I feel the warmth pour in from the cracks around the window, and from beneath the dark wooden door. I know at some point while exiting or entering this room I will bang my head against the low-hanging stone that frames the top of the doorway, like I did in the morning, and several times the day before. How many others have hit their heads against that stone, I wonder. I smile with sympathy, and I feel a momentary closeness to the ghosts of those who slept here before me over the centuries. The inescapable past creeps up like a shadow to consume my thoughts. 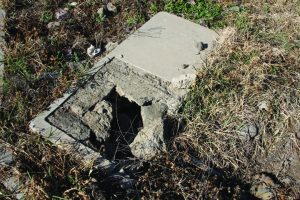 The overturned graves, the piles of soil, dead grass, and thorns, the broken pieces of the gravestones, and those bones—it felt as if someone had punched me in the gut. (Photo by Nanore Barsoumian)

I touched human bones just the other day in the Armenian cemetery in Diyarbakir—soil-stained fragments of your neighbors. The overturned graves, the piles of soil, dead grass, and thorns, the broken pieces of the gravestones, and those bones—it felt as if someone had punched me in the gut. Will the dead ever find peace on these lands, I wondered.

As workers smoothed out the dark gray stones at the Surp Giragos Armenian Church, I contemplated what we had lost. As I walked through the welders’ street, I heard my co-traveler’s voice. “Don’t look at the men with the torches,” he said. “The light will hurt your eyes.” The welders, shielded by heavy masks, torched away, sending bright sparks—like fireworks—my way. I looked away. “My great-grandfather was a welder,” he said. One of these shops belonged to him at one time, before those dark days came, before they bled to death outside these city walls. Do they tell you about those days, when you lost your neighbors, and your neighbors, we, lost everything: homes, fields, schools, churches, the water, the air, and life itself?

I wish these city walls could speak. No, I wish you would speak. Tell me, what happened here? Tell me what you’ve heard. Tell me you understand that what we have lost cannot be bought by gold—that gold they dig for under every Armenian rock, house, and grave on these lands.

I walked through the winding dirt roads of Havav (Ekinözü) to a fountain located at a spot where the road dips and opens into a large dirt field. Music was playing and men were dancing. An Armenian man was crying. He had traveled thousands of miles to his grandfather’s village. They restored two fountains here—from the time of the Armenians, they say. It was a symbolic gesture, but the symbolism fell on that man’s heart like the massive stones at the crumbling Armenian monastery just a few hundred feet away. 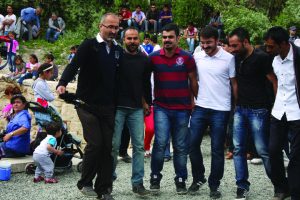 I walked through the winding dirt roads of Havav (Ekinözü) to a fountain located at a spot where the road dips and opens into a large dirt field. Music was playing and men were dancing. An Armenian man was crying. (Photo by Nanore Barsoumian)

Who am I exactly? Why am I here? Why is there a fine string—like the one a spider weaves—extending from my hip to this land where I am seen as a foreigner, a tourist or, at best, a guest? The questions flashed through my being each time I saw the ruins of a church, and the stones that bore the squiggly letters of my alphabet in monasteries or on the sides of village homes. The questions persisted, as though someone etched them on the backs of my eyelids, and I felt like a fish deprived of water. I come here armed with a camera, a pen, and a notepad—to trap the proof of our past that is perpetually under siege.

Thank you for helping restore Surp Giragos—really! It’s a beautiful flower in our forest of dying plants. But I do have to ask you, what’s next? What is a church without its congregation? “You’re constantly faced with choices,” said a good friend of mine, as I sat fractured on this city’s wall. So, let me ask you again, where do we go from here?