What of the Rights of Javakhk-Armenians?

While we are well aware that the UN Convention on the Prevention and Punishment of the Crime of Genocide is the international law under which we seek justice for the Armenian Genocide, and we know that the right to self-determination of Karabagh-Armenians is protected under Article VIII of the Helsinki Final Act, what of the rights of Javakhk Armenians?

As a member of the Council of Europe, Georgia signed the Framework Convention for the Protection of National Minorities (FCNM) in 2005, which states that a “genuinely democratic society should not only respect the ethnic, cultural, linguistic, and religious identity of each person belonging to a national minority, but also create appropriate conditions enabling them to express, preserve, and develop this identity.” Yet, Georgia fails to respect the letter and spirit of the rights afforded to the Javakhk-Armenians under this charter.

During a recent visit to the historic Armenian region lying north of the present-day Armenian Republic, I lay witness to the religious and cultural discrimination against which the Armenians of Javakhk struggle on a daily basis.

The policy of discrimination against Javakhk-Armenians is further perpetuated by Georgian limitations on the use of the Armenian language in schools, the conversion of Armenian schools in Javakhk into Georgian state schools, and the dismissal of Armenian teachers who have protested against the discrimination. Armenian students in Javakhk receive less face-to-face Armenian instruction today than they did during the Soviet era. 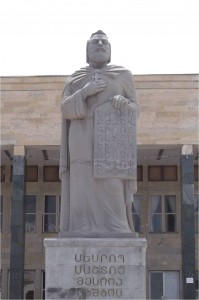 The St. Mesrop Mashtots statue Akhalkalak, one of the few remaining Armenian symbols of Javakhk.

These policies subject the Armenians in Javakhk to religious and cultural discrimination in direct breach of Article V of the FCNM, which states: “The Parties undertake to promote the conditions necessary for persons belonging to national minorities to maintain and develop their culture, and preserve the essential elements of their identity, namely their religion, language, traditions, and cultural heritage.”

They are also in violation of Article XIV of the FCNM, which makes direct reference to the right to education of Javakhk-Armenians: “In areas inhabited by persons belonging to national minorities traditionally or in substantial numbers, if there is sufficient demand, the Parties shall endeavour to ensure, as far as possible and within the framework of their education systems, that persons belonging to those minorities have adequate opportunities for being taught the minority language or for receiving instruction in this language.”

It should be noted that the Georgian government’s denial of the rights of Armenians in Javakhk additionally defies a multitude of international laws and conventions, many of which have been signed by Georgia and not adhered to, and others simply not signed at all.

Thus far, Georgia has failed to sign and ratify the Council of Europe European Charter for Regional or Minority Languages (ECRML).

Given Tbilisi’s disregard for the basic rights of Javakhk-Armenians, it is no wonder that outspoken Armenian community leaders have been persecuted by the Georgian authorities. Also, the few appeals made by both the Republic of Armenia and the Armenian Apostolic Church for an improvement of the religious and linguistic rights of Javakhk Armenians have been dismissed.

While the Republic of Armenia and the Armenian Apostolic Church must defend the rights of Javakhk-Armenians with greater vigour, the Armenian Diaspora also has an immediate political duty towards Javakhk.

We must more actively voice our concerns regarding the rights of Javakhk-Armenians to those individuals who represent us in legislative bodies throughout the world. The positions of elected officials on the rights afforded to Javakhk-Armenians under various international agreements should play a role in our decisions to support them, just as their positions on the issues of Nagorno-Karabagh and the Armenian Genocide already do.