London – Around 1500 people silently marched to The Cenotaph memorial on Saturday 20 April 2013 in an annual remembrance of one and a half million fellow Armenians slaughtered by Ottoman Turks during Armenian Genocide of 1915.

An incessant stream of people passed through prominent streets of London carrying hundreds of placards, laying wreaths at the base of the Cenotaph where the procession culminated its route. 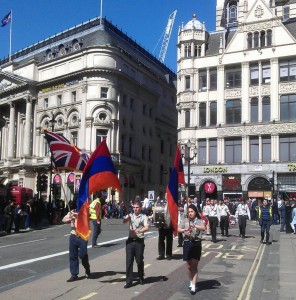 Homenetmen Scouts ahead of the march.
Photo by Vasken Jermakian

The procession lead by the Homenetmen Armenian Scouts and members of the Armenian Community and Church Council and CRAG, began in the morning on Oxford Street, moving to Regents Street, Haymarket, Trafalgar Square and Whitehall. Informative leaflets were handed out to members of public throughout the march. Official representatives placed wreaths at the Cenotaph, Mr Ara Margarian (Councillor) of the Embassy of the Republic of Armenian, Mr Ara Palamoudian Chairman of the Armenian Community and Church Council and Bishop Vahan Hovhanessian of the Diocese of the Armenian Church of Great Britain, who continued with a prayer service remembering the 1.5 Million Armenians who perished before, during and after 1915. The procession then sang the Armenian National Anthem and after a few announcements, representatives of the Armenian Community in Great Britain together with photo journalist Khecho Arakelian, continued to 10 Downing street to hand in the petition letter to the Prime Minister’s office. 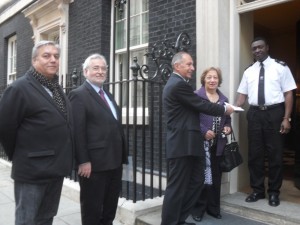 April 24 marks the 98th anniversary of the arrest of more than 250 Armenian political leaders, intellectuals, teachers, clergy and artists in Constantinople ordered by the government of the Ottoman Empire. Their subsequent executions were followed by massacres and deportations of Armenians in what is now eastern Turkey and other parts of the crumbling empire. An estimated 1.5 million victims lost their lives on the death marches to the Syrian desert during the genocide and nearly 90 percent of the Armenian Homeland. 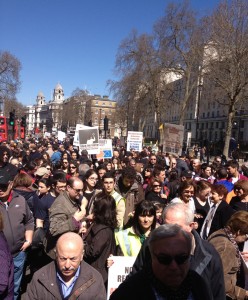 United in a just cause. Their ancestors did not lie.

Successive Turkish governments have denied a planned government effort to exterminate the Ottoman Empire’s Armenian population. They have claimed that Ottoman Armenians died in much smaller numbers and the deaths were mainly a result of local ethnic conflicts. Accordingly, they have strongly condemned foreign governments and parliaments recognizing the massacres as genocide.

The community is working in a cooperative and concerted manner for commemoration of the Centennial of the Armenian Genocide in 2015. A special committee was formed in 2012 from representatives of all major Armenian organisation, who are actively preparing a comprehensive program. The Armenian Genocide Centenary Commemoration Committee will soon begin its public engagement program and announcements.

By Raffi Sarkissian/CRAG - ACCC of GB