The Whisper of Silent Stones

House with triangular stone in what used to be the Armenian district of Sivas/Sepastia.

Two years ago, when I decided to visit Turkey to do some research for my upcoming novel, people couldn’t wait to give me tips on what to see and do. They would inevitably describe the splendor of Istanbul’s many wonders, or the beauty of the Aegean coast. I would listen politely before informing them that I was going to Turkey to see Sivas, a landlocked province located in the middle of the country, where no tourist would purposely go. Once an important stop on the Silk Route, Sivas, known to Armenians as Sepastia, is by today’s standards, “off the beaten path.”

My novel, The Exile, a story about a young Turkish man discovering the secrets of his family’s and his country’s past is set against the Armenian Genocide and takes place in Sivas. I wanted to see the place for myself, smell the air and touch the earth that my characters inhabited. Yet, this was not a very good time to be poking one’s nose in the nation’s past. It was May 2011. The June 12 elections were only a few weeks away and the country’s nationalistic and conservative factions were grappling for power. The PKK had, only one week earlier, tried to bomb the caravan carrying the prime minister. Turkey’s long history of tension with its minorities could be viewed on every page of the Hurriyet Daily, from the front page to the arts section. The journey seemed even more dangerous considering that the assassination of Hrant Dink was still being “investigated.” 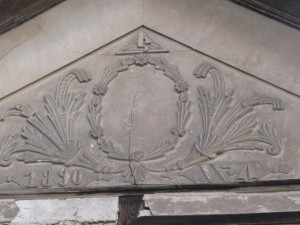 Engraved Stone adorning a home in what used to be the Armenian district of Sivas/Sepastia.

I put on a brave front, but deep down I was filled with fear. My upbringing in a private Armenian nationalist school in California had taught me that most Turks were either completely uninformed or, worse, were more or less intent on destroying anything Armenian. Only one month earlier, on April 24, the commemorative day of the genocide, a young Armenian man serving in the Turkish Army had been killed. Everyone in the United States and even some friends in Istanbul tried to persuade me against the visit. Some used fear as a deterrent, others boredom, saying, “There’s nothing to see there.”

Once I made up my mind to go, I had to find a suitable translator and guide. When Deniz, a Turkish historian I met online, volunteered, I was very suspicious. Why would a Turkish woman, a perfect stranger, go out of her way and take a seven hour bus ride from Ankara to Sivas, just to help an Armenian-American historian, Deniz was committed to unveiling the past and arriving at a truth unbridled by nationalist narratives. In a country where having Armenian blood carries a huge social and political stigma, and pursuing historical narratives that contradict the government’s version of the past is punishable by law, Deniz’s decision to help me was humbling.

When my husband and I stepped off the plane in Sivas, Deniz and her fiancé were there to greet us. After a few reassuring smiles and awkward embraces, we boarded the only bus to Sivas City. In the lobby of our hotel, over a hot cup of coffee, I admitted to Deniz that I had never had, and never expected to have, a Turkish friend. She smiled and admitted the same. We agreed to embark on a journey into our shared past with open hearts and minds. We spent the next few days together, with Deniz and her fiancé acting as my guides and translators, and with my husband acting as photographer.

According to historians, the Armenian population of Sivas before World War I was upwards of 70,000. Today there are approximately 60 individuals left, only 1 of whom can speak Armenian. Some of these inhabitants were old enough to witness the deterioration and demolition of every church from 1942 to the last one in 1978. Along the small shops located in the center of the city, Deniz led me to an old friend of her father’s, an Armenian man who could no longer speak the language but who could trace his family’s roots in Sivas back to 1895. When we asked him what it was like for Armenians in Sivas now, he said that things were fine, but added, “People were more civilized before. They used to live together more harmoniously. It is getting worse.”

He drew us a map of the old Armenian quarter, including the location of his now-abandoned family home, where until a decade ago his mother still lived. Women in headscarves stared at us from porches and stoops. Dust-covered children on rusty bikes followed us, practicing the few English phrases they knew. We found the old man’s house locked, the ocher-colored exterior walls leaning away from a purple flowered tree. Next door a squatter had left a half-eaten bowl of rice in the courtyard. 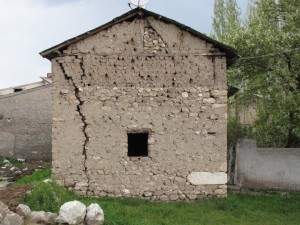 Armenian headstone repurposed in village of Pirkinik, since renamed Cayboyu.

After walking for some time in this old Armenian district, we found another dilapidated old house that stood out both in terms of stature and size as well as architecture. There was something familiar and haunting about the structure. The minute I saw it, I knew it was the imagined home of my novel’s protagonist, Lucine: a two-story Victorian construct with a large porch flanked by four columns and eight paneless windows. Inside was a parlor, or foyer, with four doors leading to the various rooms, one with an aging but still magnificent mural. It stood hollowed out, gutted and forlorn, dwarfed on all four sides by apartment buildings built in the last 30 years. Surrounding it were a hundred balconies sporting satellite dishes and the day’s laundry hung out to dry.

At the very top was a triangular stone with a decorative relief. On it the date 1890 appeared in Arabic numerals, with the same date written in Ottoman in the right corner. In the top corner, above all this, was the Armenian letter “E.” Deniz, who is fluent in modern and Ottoman Turkish, asked me to explain the inscription. I told her that this letter, found upon almost all altars of Armenian churches, is the seventh letter of the Armenian alphabet and has great meaning for Armenians. It means, “God is here.” This was undoubtedly an Armenian Christian house. The house was clearly the upper class home of a once prominent Armenian family. Did they abandon it or were they forced out in 1915? There is no one left who can answer that question. It took an Armenian novelist and a Turkish scholar to decode the structure’s partial history. Without Deniz, I would never have found the old Armenian district, much less this house. And without me, Deniz would never have known that the structure was evidence of the province’s vanished Armenian citizens.

The four of us stood helplessly in front of the dilapidating structure, wishing to capture and preserve it. A strange aura of mourning precipitated the space between our bodies as we struggled with the idea that a handful of Armenians and this abandoned house are all that’s left of a once thriving community of 70,000 Christians, 7 churches, and 1 monastery. 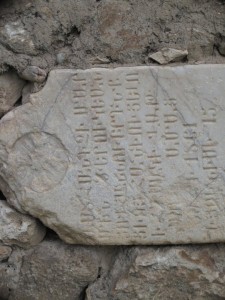 Repurposed Headstone in the village of Pirkinik, since renamed Cayboyu, is the only evidence left of this Armenian Catholic village.

The next day we drove to the village of Cayboyu. Once known as Pirkinik, Cayboyu is the birthplace of Daniel Varoujan, the beloved Armenian poet who was killed during the genocide. Before World War I, Pirkinik was almost entirely made up of Armenian Catholics. Today, it is a quaint little village where cows are more prevalent than villagers. The smell of cow dung being burned for fuel permeated the air and the ground was covered in mud. We combed the cemetery for Armenian headstones but could not find one. There wasn’t a single hint left of the people who built and lived in the village. Rain started pouring down on our heads. Village girls scrambled to round the cows towards shelter. Disappointed, we were heading back toward the car when I noticed a polished white marble stone ensconced in a cement building. Upon closer examination, I could tell it was a headstone. The Armenian inscription gave the owner’s name as well as the dates of his birth and death, “1861.” Once again, I translated for my new Turkish friends. We stood in the rain, the four of us, a pair of Armenians and a pair of Turks, in front of this polished white marble stone, and paid our respects. It was a four-person memorial to all those who were killed or driven from this land, as well as those whose history had been systematically erased. We honored them together and swore that we four, at least, would never forget this shared experience.

Back in the center of town, vans sporting the faces of the two main political candidates circled the main square, blaring propaganda from speakers into the street. Turkish flags hung from every building and waved above our heads on every street. Deniz and her fiancé hung their heads in exhaustion and despair. We had escorted them into a time machine of sorts, and together we had uncovered a disappearing and denied past. Finding these structures seemed like a small victory at the time, but as I returned to my novel and Deniz returned to her research, we both felt the weight of those silent forgotten stones. Those crumbling buildings, abandoned by time and memory, were calling out to us, demanding that their occupants be remembered.