Supreme Patriarch and Catholicos of All Armenians 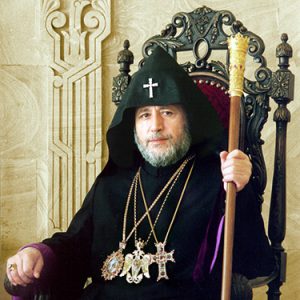 His Holiness KAREKIN II Supreme Patriarch and Catholicos of All Armenians

Shortly thereafter, HH Vasken I Catholicos of All Armenians sent the new priest to Vienna to study theology. In 1975, Fr. Nersissian moved to Germany, where he studied and graduated from Bonn University, while serving as pastor to the local Armenian Community. Following a brief return to Armenia, he enrolled to postgraduate studies at the Russian Orthodox Academy in Zagorsk, Russia, from which he graduated in 1979.

In March 1980 he entered the service of the Armenian Pontifical Diocese, the Armenian Church’s most populous diocesan jurisdiction, which incorporates the capital Yerevan and the vicinity of the Mother See of Holy Etchmiadzin. He was appointed the head of that Diocese in June 1983 and soon was elevated to the rank of bishop on 23rd October of the same year, by His Holiness Vasken I. In November 1992 he was granted the title of Archbishop.

In November 1998 Archbishop Karekin Nersissian was appointed as Pontifical Vicar by His Holiness Karekin I and served in this capacity until the death of the late Catholicos.

On 27th October 1999, the National-Ecclesiastical Assembly held in Holy Etchmiadzin, elected Archbishop Karekin Nersissian Catholicos who thus became Karekin II, Supreme Patriarch and Catholicos of All Armenians. The consecration and enthronement of the Catholicos took place on 4th November 1999.