The annual Shakespeare Theatre Festival established over a decade ago in Armenia, has now reached widespread international reputation, bringing celebrated theatre groups and mono performers from around the world to the Armenian capital. This year the theatre festival was manifestly dedicated to the 400th anniversary of Shakespeare’s death, and took place in Yerevan between the 21 to 26 October 2016. Yerevan Drama Theatre displayed their novel Shakespearean production of Twelfth Night on the 22nd October. Jasmine Seymour reviewed the latest Shakespearean production of this state-run repertory theatre, with its vigorous, youthful cast and innovative director Grigor Khachatryan. 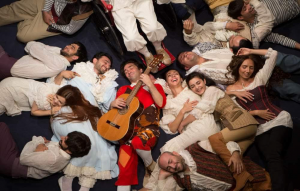 In 2016 Armenia equally celebrated the 150th anniversary of the arrival of William Shakespeare on the Armenian stage in April 1866 with the performance of The Merchant of Venice, at the Armenian Theatre in Tiflis. Since then, Shakespeare has been the most performed author on the Armenian stage. Just glancing at the present repertory of Yerevan Drama Theatre of Hrachia Ghaplanian (YDT) directed by Armen Khandikyan, we realize the dedication to the Bard with five Shakespearean plays on the menu, among which are four tragedies: Hamlet, Macbeth, Romeo and Juliet and Julius Caesar. Thankfully, the latest addition, the much-anticipated comedy, Twelfth Night, opened on the 4th October 2014. Staged by compelling young director Grigor Khachatryan with the stylish translation by great writer Khachik Dashtents (1910-1974), the play drifts like a stream of joy for two hours without interval.

In his latest book entitled 101 Greatest Plays of All Times, perhaps the most enduring of all English critics, Michael Billington, comprised only two Shakespearean comedies. One of them, Twelfth Night, which is, according to Billington, a romantic comedy, intertwined with melancholic sorrow, à la Chekov. Written during Shakespeare’s most productive years, around 1601-1602, around the same time as his masterpiece of Hamlet, the comedy was performed during the festivities twelve days after Christmas in London. Yerevan Drama Theatre’s production of Twelfth Night is pleasingly audacious, meanwhile it conveys the poetic melancholy and the hilarious ambiguity of the text. 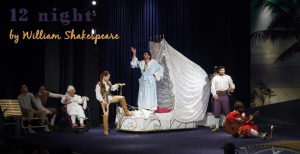 THE BED OF MANY ANTICIPATIONS

Firstly, the dexterous use of the décor should be commended, which consists of three focal elements: a bridge with sliding staircase reminding the audience of the recent shipwreck, which carried beautiful Viola to the idyllic country of Illyria; the Roman-style water fountain – an emblematic feature of the Mediterranean architecture; and lastly, an oversized bed with transparent draperies that unveil the hidden desires of the characters. All three elements of the décor designed by Vahagn Tevanyan, are brilliantly fused with stage action and confusion. 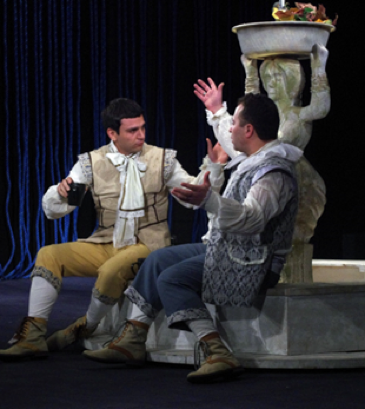 THE DYNAMIC DUO OF THE ODD ONES OUT:
SIR TOBY BELCH- VAHAGN GALSTYAN AND
SIR ANDREW AGUECHEEK – ARTASHES MKHITARYAN

From the opening scene of the comedy, when the Duke exclaims: “If music be the food of love, play on”, Shakespeare was highlighting the importance of music in the comedy’s ambience. The original songs composed by Arthur Manukian (who equally appears in the role of Feste otherwise the Fool), are pleasing additions to this festive, exuberant production. The costumes add to the dreamlike atmosphere –  airy and revealing nightwear worn by Olivia, her “entourage”, the Duke and other inhabitants of Illyria contrast with more feisty and military outfits of Viola and her twin brother Sebastian. The costumes designed by Mary Sargsyan aided effectively actors to communicate one of the messages of the play – love is not merely a spiritual or emotional but also a strong physical attraction.

However, the success of this production is largely due to the robust performances of the cast. All characters in Shakespeare’s comedy are intertwined either by emotion or by blood. If habitually the central female character is Viola – Lydia Grigoryan, nevertheless, other female characters, Olivia – Narine Petrosyan, and Maria – Lusine Harutunyan, are both radiant in their performances. Not only the twins Viola and Sebastian seem to be shipwrecked, but other characters are likewise searching for a change in their destiny, for meaning and passion in the dullness of their existence. 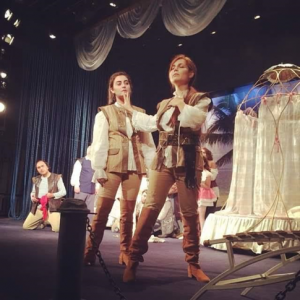 Some sixty years ago, in the 1955 production of Twelfth Night by John Gielgud in Stratford, magnificent Vivien Leigh had interpreted simultaneously the roles of the twins, Viola and Sebastian. Likewise, the twist in the Armenian Twelfth Night, makes this sexually ambiguous comedy even more baffling, as the twins Viola and Sebastian are both interpreted by female actors.  Viola – Lidia Grigoryan, and her twin brother Sebastian – Diana Malenko, who astoundingly look like each other, which enhances the overall homoerotic confusion of the comedy. Lady Olivia, who falls in love with Viola, disguised as a soldier; meanwhile at the end of the play she marries her twin brother Sebastian, equally a female actor, disguised as a male, leaves the audience farcically compliant and seduced by the dubious narrative. 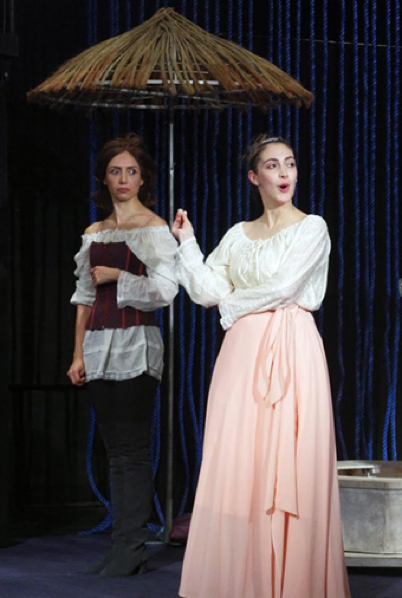 One of the central female characters of the comedy, Olivia, interpreted by Narine Petrosyan is an absolute treat to contemplate. Miss Petrosyan has an innate talent for captivating the attention of her spectators: dressed in evocative lingerie and posing as an inconsolable, grief-stricken heiress, who has promised to stay celibate for seven years, Olivia – Petrosyan is both compelling and magnetic in the role. Among the male interpretations, the dynamic duo of Sir Toby Belch – Vahagn Galstyan and Sir Andrew Aguecheek – Artashes Mkhitaryan, increase the hilarious mix-up of the events.

Since the first Shakespearean translations in the 1820s, Armenians have obstinately given preference to Shakespeare’s tragedies, due to the parallels between their stories and Armenia’s turbulent history. Traditionally, tragic heroes gained immense popularity thanks to leading stage actors, such as Hamlet – Petros Adamian in the 1880s, Hamlet – Miss Siranush in the 1900s, Othello – Vahram Papazian in the first half of the 20th century or Coriolanus – Khoren Abrahamian in the 1980s. Yerevan Dramatic Theatre’s current Twelfth Night, nevertheless is a perfect example that Armenian theatre can also have dissimilar, experimental approach to Shakespeare, with a harmonious ensemble acting and a distinctive message from director Grigor Khachatryan – a rather Brechtian incline, that has been at the core of the theatre’s values since its creation in 1968.

For visitors of the Armenian capital, this invigorating and refreshing production of Twelfth Night by Yerevan Drama Theatre should be an unmissable treat, which will accompany them long after the curtain falls.