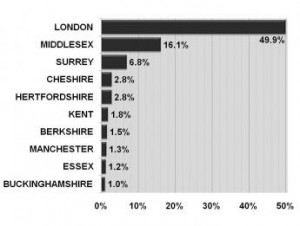 Most popular cities and counties (as % of ACCC database)

Origins
Armenians started immigrating to Great Britain since the 18th century predominantly to Manchester where they specialized in the textile industry and started forming communities in the 19th century. Many Armenians arrived between 1914 and 1918 because of the Armenian Genocide and another large influx occurred during World War II and during more recent years.

Religion
Most British Armenians belong to the Armenian Apostolic Church under the jurisdiction of the See of Holy Echmiadzin. There are two Armenian Churches in London, St Sarkis and St Yeghiche churches, and Holy Trinity Church in Manchester which is the first Armenian Church to be opened in Britain in 1870.

Geographical distributions
The majority are based in the major cities of Greater London and Manchester. According to the ACCCs database which enlists thousands of families, the analyses show that London itself houses more than 65% of the population and around 40% of all British-Armenians reside in west London.

The 2001 UK Census recorded 589 Armenian-born people living in the UK, although there are up to 18,000 ethnic Armenians including those who are British-born, and of part Armenian descent, living in the UK. 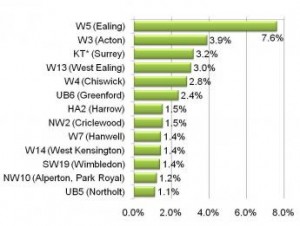 According to Vered Amit’s “Armenians in London: The Management of Social Boundaries”, published in 1989, around 50,000 Armenians were living in Greater London at the

time. The majority were thought to be first-generation immigrants from Lebanon, Syria, Iraq, Iran and Cyprus. They also include Armenians from Ethiopia, India, Egypt, Palestine, as well as individuals from other countries. Manchester has been home to an Armenian population since 1835, with 30 Armenian businesses thought to have been operating in the city by 1862.