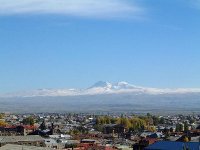 The deployment of the 102nd Russian military base in Gyumri remains the subject of heated debate. Some believe that that the Russian base guarantees security for Armenia, while some are convinced that the base threatens the sovereignty of the country. Pravda.Ru talked to the Vice President of the Academy of Geopolitical Issues Konstantin Sivkov to get some clarity on the situation.

“Turkey has an overwhelming military superiority in the region, and Russia is unlikely to be able (in military terms) to stop the advance of the Turkish troops. However, in case of an attack on Armenia, Turkey would declare a war on Russia as well. The 102nd Russian military base in Gyumri has more of a geopolitical significance rather than military. Do you agree with this statement?”

“Any military base located outside of Russia is a guarantee that in the event of military action against any such country, Russia will enter the conflict on the side of that country. Otherwise, there would be no military bases deployed there. This is clear. If Turkey attacks Armenia, it will be treated as an attack on Russia. Russia would fight on Armenia’s side with all its might. If necessary, Russia could use nuclear weapons against Turkey, both tactical, and if need be, strategic. This is defined in the military doctrine of the Russian Federation. Armenia is fully protected with the Russian umbrella of both conventional forces as well as strategic nuclear forces.”

“Russia spent a significant amount of money on Gabala radar station (RS) in Azerbaijan, as well as its military bases in Central Asia. There are sales of Russian weapons, including the offensive ones, to Azerbaijan. Currently, Armenia and Azerbaijan have the same sore issue – Artsakh (Nagorno-Karabakh). Why is Armenia not charging rent for the Russian base?”

“This is because Russia and Armenia are allies. They have no commercial relationship like the one between Azerbaijan and Russia. Russia will not fight for Azerbaijan, but will fight for Armenia. Armenia is part of the overall defense of the Collective Security Treaty Organization (CSTO). Armenia cannot maintain effective means of defense because it’s quite expensive. The presence in the country of the Russian Federation base equipped with anti-aircraft missile systems S-300 and MiG-29 and able to provide a reliable defense against threats to Armenia of a certain scale, that is, something that can be fought off with their own forces and resources. In case of a more serious threat, additional forces and air defense and fighter aircraft may be redeployed there.

“The question of who needs the base more – Russia or Armenia – often turns into a pointless debate about dependence. Given the strained relations between Turkey and Armenia, the Karabakh conflict and open support that Ankara provides to Baku in this conflict, the 102nd Russian base plays an important role in ensuring the safety of Armenia. However, the U.S. has reasons behind the encouragement of normalization of Armenian-Turkish relations with the help of Zurich protocols. The goal is to eliminate Armenia’s interest in the presence of a Russian military base on its territory. What do you think about it?”

“Do you think the presence of the Russian military base in Armenia is a threat to its sovereignty?”

“This position is likely shared by Dashnak Armenian nationalists who in the beginning of the last century called for sovereignty and independence of Armenia. But such a small country like Armenia cannot exist without the patronage of major powers. If Russia leaves Armenia, the United States will come back. This is the only possible solution. The mere presence of the Russian military base is a guarantee of the sovereignty of Armenia. Moreover, the composition and size of the military base, and its primary task of defense, rule out the possibility of any significant impact on the internal political life of Armenia. Fighter jets can in no way affect the political life of this country.”