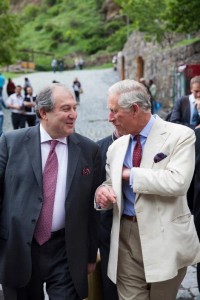 Prince Charles with Dr. Sarkissian after a visit to Geghard. Courtesy image

Yerevan – Two ancient cultures came together to celebrate tradition and heritage when the Prince of Wales made an historic visit to Armenia.

Prince Charles, who is the heir to Queen Elizabeth II, became the first senior member of the British royal family to travel to Armenia. His three-day visit was at the invitation of Dr Armen Sarkissian, President of Yerevan My Love charitable foundation and former prime minister of Armenia.

Prince Charles was in Armenia from May 28-30 to see the work of Yerevan My Love in restoring part of the city’s traditional architectural heritage. The charity carries out “heritage-led regeneration projects with high social impact programmes”. It restores historic buildings in Yerevan and adapts them for programmes designed to help disadvantaged children and youth.

The Prince’s first fist was to the famous Matenadaran library of ancient manuscripts and documents in Yerevan to view part of its priceless collection of works, including illustrate Bibles dating back to the 13th Century. He was presented with a silver-bound copy of Grigor Naregatsi’s Book of Lamentations, one of Armenian literature’s most important texts, to commemorate his visit.

The Royal guest was also shown the institute’s manuscript vault and its climate-controlled storage facility that is vital to protecting documents for future generations to study and appreciate their cultural value and beauty.

Dr Sarkissian gave a presentation at the Matenadaran to the Prince and assembled guests on the work of Yerevan My Love, saying that it wanted to “encourage people that they have the right and the obligation to fight for what you believe” and that heritage and tradition mattered for the future.

Yerevan My Love is restoring historic buildings around St Hovhannes Church in Yerevan’s impoverished Kond neighbourhood, which will provide a Mother and Child shelter, a nursery for disabled children and a centre for community activities.

It is also restoring a series of buildings close to the city’s St Sarkis Church that will provide arts and crafts workshops, computer classes, educational activities, a theatre and concert hall, an arts gallery, and an open-air amphitheatre for the benefit of disadvantaged families, particularly children.

Dr Sarkissian invited Lord Randle Siddeley, the British landscape architect, to present the charity’s ambitious plan to establish a Hye Park in the capital, a National Park to unite Armenia’s worldwide diaspora with its homeland.

“These efforts are all about dreams and dreams coming true,” Sarkissian said, adding that he harboured a dream to see young Armenian students travelling to Scotland to take part in educational programmes.

In this way Yerevan My Love is very similar to Dumfries House, a heritage-led regeneration project in Scotland, which is being developed by The Prince of Wales to not only reinvigorate the surrounding area, but to create a lasting and creative legacy for many years to come. Dr. Sarkissian has been an avid supporter of Dumfries House.

Prince Charles paid a visit to President Serzh Sargsyan during his stay in Yerevan.

The Prince saw many of Armenia’s most important and famous sites, including the Khor Virap monastery, which stands beneath the majestic gaze of Mount Ararat, the resting place of Noah’s Ark. The patron saint of Armenia, St Gregory the Illuminator, was imprisoned at Khor Virap for 14 years before he converted Armenia’s King Trdat III to Christianity in 301, making Armenia the first state to adopt Christianity as its official religion.

He visit the 13th century monastery of Geghard. The architecturally significant church, which is partially carved out of the mountain, is a UNESC World Heritage Site. The Prince admired the singing of the girls’ choir in one of the chapels of the religious complex, famed for its magnificent acoustics.

Near the city of Etchmiadzin, the Prince toured the ruins of the 7th century circular church of Zvartnots, considered a gem of Armenian architecture.

A visit with Armenia’s president

A gala concert in celebration of British-Armenian charitable projects took place at the Opera House in the presence of the President of Armenia, The Prince of Wales, the Catholicos of All Armenian, invited dignitaries and foreign ambassadors and international guests. The State Youth Orchestra of Armenia, under the direction of young conductor Sergey Smbatyan, performed a unique programme on this special occasion. The National State Academic Choir of Armenia, dancers from the Spendiarian Ballet Group and a host of distinguished artists, such as cellist Narek Hakhnazaryan, bass Barseg Tumanyan, and baritone Gevorg Hakobyan, took part in the programme.

Dr Sarkissian thanked all of the benefactors and supporters for their generosity and expressed his personal gratitude to Prince Charles. “We are deeply grateful to the Prince for his warm support of Yerevan My Love and its work. We remain inspired by the example that he has set and look forward to even deeper cooperation in our shared passion for heritage-led regeneration.”

The President of Armenia reminded guests that the friendship between England and Armenia dated back to the Middle Ages.

“I was told that the Cilician Armenian King Leo II presided over the wedding of Richard the Lionheart,” President Sargsyan said. “I should say that cooperation between our nations is always somehow established through the attitude of the Armenian nation to the Royal Family.”

Prince Charles told guests that it had been “the greatest joy to come to Armenia for the first time”, praising its tradition of hospitality and the “unbelievable specialness of your food and your wine”.

He continued: “I have always felt for immense suffering of the Armenian people for so long and in so many different ways. And many of us cannot but admire the way the Armenian people all around the world are so remarkably resilient and somehow manage to make such immense successes of their lives.”

A visit to Etchmiadzin

On his final day in Armenia, Prince Charles travelled to Holy Etchmiadzin, the Mother See of the Armenian Apostolic Church. He was welcomed into the Mother Cathedral by His Holiness Garegin II, Supreme Patriarch and Catholicos of All Armenians, and was shown the Altar of Descent, directly beneath its main dome, where St Gregory the Illuminator saw Christ strike the earth with a golden hammer to signify the location of Holy Etchmiadzin.

The Catholicos escorted Prince Charles, accompanied by Dr Armen Sarkissian, to view the unique collection of sacred relics in the cathedral’s museum. Among the treasures he was shown were the Holy Lance, which pierced the side of Christ, a wooden fragment from Noah’s Ark and a relic of the True Cross.

The Prince also stepped down into a chamber beneath the cathedral’s Holy Main Altar where remnants of the original Holy Altar from the time of St Gregory the Illuminator were discovered during archeological excavations.

Prince Charles watched a Christening of a child from Gyumri take place at Etchmiadzin’s new Baptistery and delighted visiting tourists as he strolled through the grounds of Etchmiadzin to visit the new Vatche and Tamar Manoukian Manuscript Library.

The Prince was presented with a book of illustrated letters of the Armenian alphabet to commemorate his visit to Etchmiadzin. He went on to visit St Hripsime Church. A children’s choir was singing beautiful Armenian hymns while the Prince saw the tomb of St Hripsime in the catacombs of the church.

The royal visit concluded against the background of Mount Ararat as Prince Charles and his host Armen Sarkissian shook hands under the sunny Armenian sky.

“It was a privilege to welcome the Prince of Wales on his historic visit to Armenia. We were delighted that Prince Charles saw some of our country’s rich and beautiful heritage, and that he could feel the appreciation of Armenians for his profound interest in our history and culture,” Dr Sarkissian said.