Part of a Season of Armenian Events –  23 October 2015 to 28 February 2016
Please click the link at the end of this article to see full list
= =  A new exhibition at the Bodleian Libraries celebrates more than 2,500 years of Armenian history and culture with a sumptuous display of manuscripts, books, sacred objects and everyday artefacts from the Armenian community that have been handed down through the generations.

Image of Adoration of the Magi, MS Arm. C1, Bodleian LibrariesArmenia: Masterpieces from an Enduring Culture features treasures from the Bodleian’s magnificent Armenian collections alongside items from private and national collections in Armenia, the Netherlands and the UK.

Opening on 23 October, Armenia is the second exhibition to be held in the Bodleian’s newly renovated Weston Library. The Bodleian Library has been collecting Armenian manuscripts and printed books since the seventeenth century, but this is the first time items from the Libraries’ rich Armenian collection have gone on public display in a major exhibition. 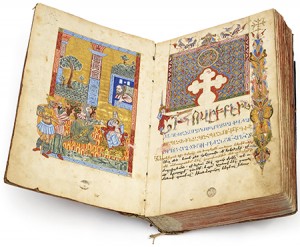 Armenia: Masterpieces from an Enduring Culture showcases more than 100 stunning objects that demonstrate the enormous achievements of a nation with a rich, fascinating and often turbulent history. The ‘enduring culture’ in the exhibition’s title refers to the great antiquity of Armenian culture. This landlocked country situated along the route of the Great Silk Road boasts a long history spanning more than two and a half millennia, from its first mention, carved into stone, in the reign of King Darius I (c. 550-486 BCE) to the modern Republic of Armenia and the numerous diaspora communities worldwide. The endurance highlighted in this new exhibition also refers to the suffering and hardship which has befallen the Armenians. 2015 marks the centenary of the genocide perpetrated against the Armenian population of the Ottoman Empire by the Young Turk government during World War I. 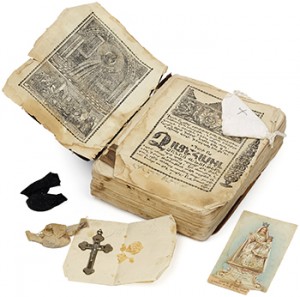 Narekac‘i, Book of Prayers, Bodleian LibrariesIn their honour, the Bodleian’s Armenia exhibition displays a rich cache of objects spanning more than two thousand years of cultural history: from coins minted in the first century BCE during the reign of King Tigranes II to sumptuously and more modestly decorated manuscripts from the Middle Ages.The diverse range of books, maps, art and artefacts on show reveals a culture that is both religious and secular. The exhibition also features the treasured objects of survivors of the 1915 genocide including traditional Armenian needlework and needlelace items, family photographs and an Armenian family’s century-old tea set.

‘The Bodleian Libraries is honoured to take part in the commemorations for the 100th anniversary of the Armenian Genocide by helping to share the history and culture of the Armenian people,’ said Bodley’s Librarian Richard Ovenden. ‘We have collected Armenian books and documents for over 400 years, and the University has taken seriously the study of Armenian culture for a very long time. Through this exhibition, which features items of exceptional beauty, we are able to share with a much broader audience the vibrancy and richness of this ancient culture.’ 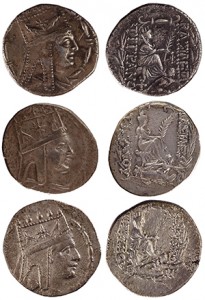 Highlights of the exhibition:
•A rare and outstandingly beautiful gospel illustrated by Mesrop of Xizan, an Armenian master of the 17th century.
•Image of Armenia coins, Bodleian Libraries/Private CollectionA venerated holy book on loan from a UK-based Armenian family who have passed down their copy through the generations. The book – known as The Narek – is an 18th century copy of The Book of Lamentation containing mystical prayer poems by Saint Gregory of Narek. This is the most venerated book in Armenian culture after the Bible, and healing powers are ascribed to it. Often called the ‘Saint of the House’, it is believed to protect the family with whom it resides.
•A brightly coloured gospel manuscript featuring a ‘hidden demon’ that has been rubbed out over the centuries by pious readers. Using hyperspectral imaging tools, conservators at the Bodleian have revealed the hidden demon and will display the newly-discovered image alongside the original manuscript.
•A collection of 20 ancient coins from a private collector and benefactor to the exhibition, which tell the story of Armenia’s tumultuous political and economic history.
•The only known copy of the first book printed in Iran, a book of psalms dating from 1638.
•The Bodleian’s oldest Armenian manuscript dating from the 11th century: a copy of John Chrysostom’s Commentary on the Epistle to the Ephesians.
•Religious artefacts such as a silk altar curtain embroidered with silver thread, a priest’s staff, and a ceremonial brass bowl.
•Personal treasures that have been carefully kept and passed down through generations of Armenian families including a traditional needlework headdress, a woman’s needlelace collar, an Armenian family’s samovar (hot water vessel used to prepare tea), and personal photographs from families affected by the Genocide.

The exhibition will also feature videos of the Oxford Armenian Choir performing in the Weston Library and a short film titled The Blessing by artist Krikor Momdjian.

‘Armenian culture has shaped humanity and given it great gifts, from precious manuscripts, literature and art to religious and secular music,’ said Theo Maarten van Lint, Calouste Gulbenkian Professor of Armenian Studies at the University of Oxford. ‘In this exhibition, we present to the public the historical, artistic and other cultural Image of Throne vision of Ezekiel, M2587, Bodleian Librariesachievements of a people not often in the focus of the public eye, in an effort to educate, fascinate and create a dialogue between nations and peoples.’

Scholarly interest in Armenian culture at the University of Oxford dates back at least 400 years, when the first Armenian texts entered the newly founded Bodleian Library through benefactions from Archbishop Laud (1573-1645). This year, the University commemorates the 50th anniversary of the establishment of an endowed Chair in Armenian Studies: the Calouste Gulbenkian Professorship. The current holder of the Professorship, Professor Theo Maarten van Lint, curated the exhibition with Robin Meyer, Lector in Latin and Greek Languages at the University of Oxford. The exhibition is the first major exhibition in the UK of Armenian materials in almost 15 years.

Armenia: Masterpieces from an Enduring Culture follows Marks of Genius, the inaugural exhibition at the Bodleian’s new Weston Library, which opened to the public in March 2015. The Armenia exhibition runs until 28 February 2016 and a programme of talks and events will be held over the course of the exhibition. Admission to the exhibition is free and booking is not required.

The Bodleian Libraries is grateful to Mr Raffy Manoukian for his generous support of the exhibition.

The exhibition is accompanied by a 276-page catalogue, Armenia: Masterpieces from an Enduring Culture, edited by the exhibition’s curators Theo Maarten van Lint and Robin Meyer (Bodleian Library Publishing, 2015). The publication was produced with the generous support of the Calouste Gulbenkian Foundation and The Hakop Kevorkian Fund. The catalogue is available from 16 October and can be purchased from the Bodleian’s online shop.

FOR FULL DETAILS PLEASE USE THE FOLLOWING LINK:
http://www.bodleian.ox.ac.uk/bodley/whats-on/upcoming-events/2015/oct/armenia