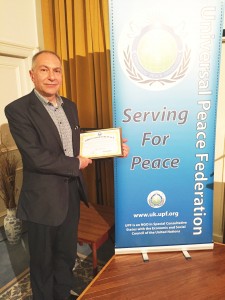 :: On Thursday, 28th April, 2016, a Special Event was held by the Universal Peace Federation UK, to mark the 101st Commemoration this year, of the Armenian Genocide of 1913-1923 (generally dated as 1915), the 47 year of the Sulaymanieh Qualadze Kurdish Genocide and the Genocide of the people in Congo during the reign of King Leopold of the Congo.

Among the speakers was Dr Garen Arevian, member of the British Armenian Community Council’s CRAG Committee (Campaign for Recognition of the Armenian Genocide),  who presented the facts of the Armenian Genocide. He talked about parallels between various genocides providing interesting examples of images from early 20th Century genocides and what is happening in the Middle East today. Similarly he briefly explained about the similarities of circumstances and methods used by the Ottoman Empire and by Germany with respect to the Armenian Genocide and the Holocaust.

Mrs Charlotte Simon spoke from her heart about the suffering of people in Congo during the rain of King Leopold.

Dr Safer Hassan of Sheffield University very briefly and effectively presented the Armenian Genocide of 1915 and the Qaladze Genocide of the Kurds in 1974, both events, coincidentally, happening on the 24th day of April, some sixty years apart.

Mr Khalid Assinger concluded by encouraging everyone to learn from the process of recognition of the Armenian Genocide and help promote the cause of recognition for the Kurdish Genocide of 1974 by Sadam’s regime in Iraq.

The concluding part of the evening was dedicated to 4 individuals who received the special award of “Ambassador For Peace” of the Universal Federation for Peace.

The Universal Peace Federation acknowledges Ambassador for Peace those individuals whose lives exemplify the ideal of living for the sake of others and who dedicate themselves to practices which promote universal moral values, strong family life, inter-religious cooperation, international harmony, renewal of the United Nations, a responsible public media and the establishment of a culture of peace.

Transcending racial, national and religious barriers, the Ambassadors for Peace contribute to the fulfilment of the hope of all ages, a unified world of peace wherein the spiritual and material dimensions of life are harmonised.

The Universal Peace Federation is hereby proud to recognise as an
Ambassador for Peace
Raffi Sarkissian.

On behalf of the Armenian Community Council of the United Kingdom, the Chairman of the Council congratulated Mr Sarkissian on receiving the most prestigious honour of Ambassador for Peace and remarked that Mr Sarkissian has for over 20 years dedicated himself to serving his community and has always been ready to lead and serve in numerous committees and organise events for the benefit of humanity in general and of the British Armenian community in particular. The award of Ambassador for Peace is a much deserved honour for Mr Sarkissian.