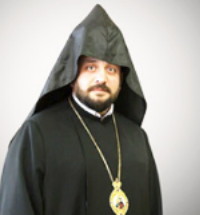 His Grace Bishop Hovakim Manukian (baptismal name Vardkes) was born on October 19, 1976, in the village Voskehat, Republic of Armenia. He received his primary education at the secondary school of the village starting in 1983 and graduating in 1993. He entered the Vaskenian Theological Academy at Lake Seven in 1994 and 1999 transferred to the Gevorkian Theological Seminary at the Mother See of Holy Etchmiadzin and graduated in 2000. He also took a course at the Bossey Ecumenical School, Geneva, Switzerland in 1998 and a course in Social Theology at the Diaconal School in Aarhus, Denmark in 2001.

In June 2015 Bishop Hovakim was appointed Primate of the Armenian Churches of the United Kingdom by His Holiness Karekin II, Catholicos and Supreme Patriarch of All Armenians.