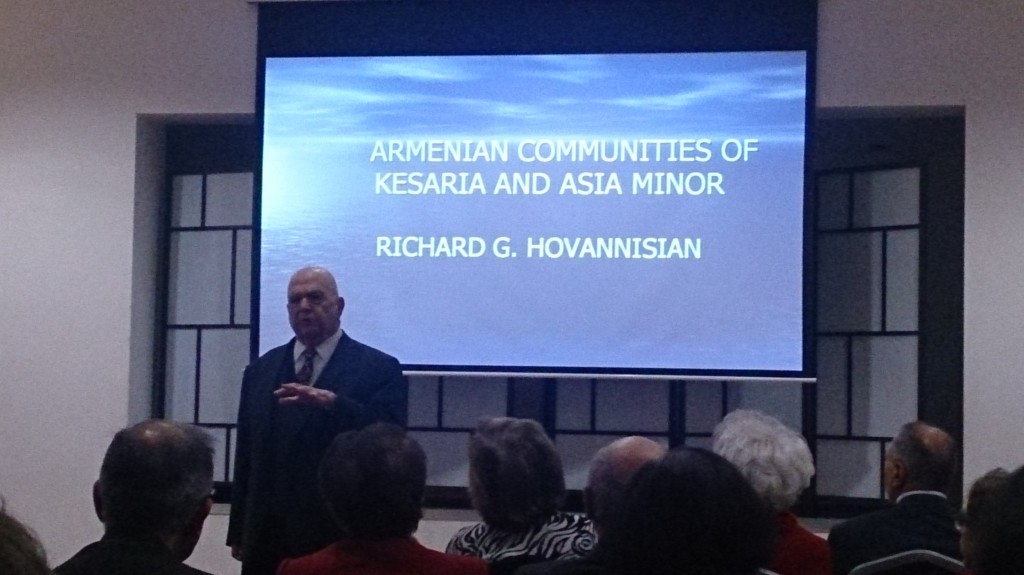 Professor emeritus Richard Hovannisian presented his latest book on Armenian Communities in Asia Minor in London on the 29th November 2014. The evening was organised by Hamazkayin London Chapter. I would vigorously recommend Armenians of any age, political or social background, who has not attended Prof. Richard Hovannisian’s presentations yet, to hurry up and do so, as only by listening and watching the famous Professor, is possible to comprehend why he has received UCLA’s prestigious “the Most Inspiring Teacher Award”.

Professor Richard Hovannisian, Gugenheim Fellow, founder of the department of Armenian studies at UCLA in the 1960s, author of dozens of reference books and research papers on Armenian history, is well over 80 now. Yet his passion for history, the accuracy of his observations, his ability to retain the attention of his audiences for almost two hours is truly remarkable. Professor Hovannisian spoke about his travels in Asia Minor for his latest book with much precision and detail, at the same time with great sense of humour.

Professor explained the history of the city of Kesaria, once known as Mossaka, when Armenian emperor Tigran the Great nicknamed “King of the Kings” invaded the region and conquered from Romans in the 1st c. B.C. However, Romans returned and conquered most of the land, while Mossaka was renamed Caesaria or Kesaria in honour of the Roman Caesar. Grigor Lusavoritch was born and brought up there, and later returned to be ordained in Kesaria. There is still a fully functioning Armenian Church called Grigor Lusavorich in Kesaria today. The wealthy Armenians here were merchants, manufacturers; among famous dynasties from Kesaria were Gulbenkian and Melkonian families.

Interestingly, in the Middle Ages, Armenians living in the city of Kesaria, were Turkish speaking, while in the villages, Armenians used to speak Armenian. During the slide show, professor Hovanissian explained that mountain Argeos, near the city of Kesaria, 3900m high, was the Holy Mountain for the local population. In the 19th century Armenian communities had cultural renaissance: hundreds of Armenian schools, colleges (varjaran) and printing houses were opened in towns and villages; the particular focus of these thriving communities was the education of girls. In every village where there were at least 100 Armenians, there was a church, a school, a band, a theatre club and active community life. 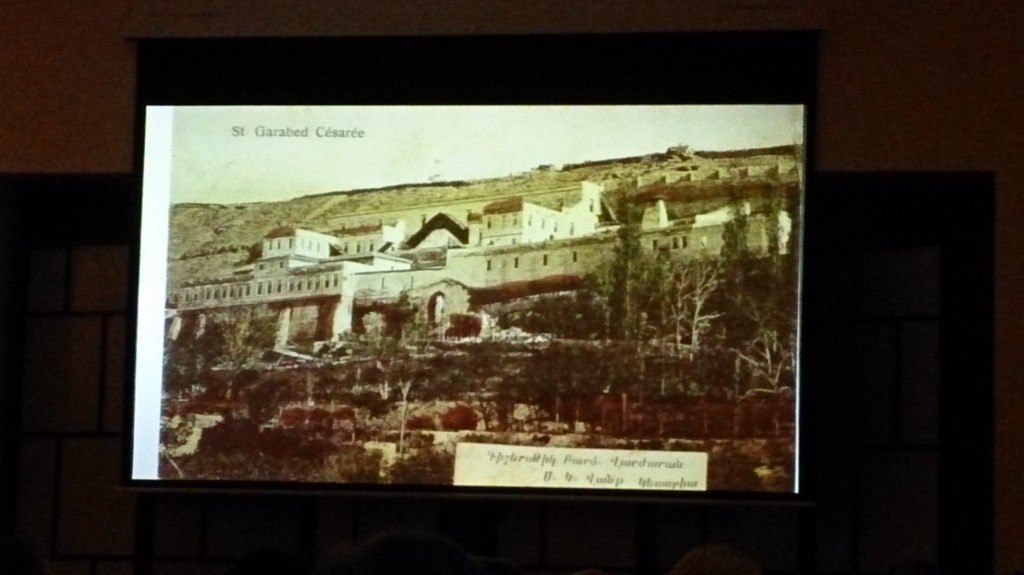 Professor Hovannisian showed archive photos of the Boys’ School opened in 1868 for poor families, as well as St. Astvatatin imposing cathedral, which is nowadays being used as a sports hall. It was particularly emotional to watch the pictures of the graduating classes of those well-dressed girls and boys of 1914, who were destined to be the last graduates of the Armenian schools. “We all know what happened to these young people a year later”, said Prof. Hovannisian.

Professor Hovannisian noted that Armenians came to live in Asia Minor mainly in the XIV c. after the collapse of their last Kingdom of Cilicia. Thus, a small village Kutahya, was the birthplace of great Armenian composer, priest and musicologist Komitas. Armenians also lived in towns of Izmid, Adabazar, Bardizag, Armash (with its famous seminary), Bursa, Kutahia, Afion-Karahisar and many more. Armenians played an important role in the production of silk, textiles, timber, tobacco, tea, tiles and ceramics. Each community had its Armenian quarters, churches and schools, bands, choirs, string orchestras, theatre groups, newspapers, magazines, etc.

Two of the greatest Shakespearean actors, Bedros Adamian and Siranoush, originated from Bursa. They contributed not only to the development of Armenian theatre but founded Turkish dramatic theatre. Later on, both actors performed in many capitals of Europe and Asia, including Moscow, St. Petersburg, and were highly praised for their Shakespearean interpretations (added by reporter).

Prof. Hovannisian showed a documentary by his daughter Ani about Hamshenanhayer, living by the Black Sea between Turkey and Georgia. In the 16th and 17th centuries many Armenians had been forced to convert to Islam, yet continued to speak Armenian until today. People had been brainwashed by Turkish government that they were not Armenian, but spoke the language because they lived next to Armenians…Whereas those who escaped persecutions and remained Christian, emigrated to Georgia and Russia: Sochi, Krasnodar, Suchumi, Rostov among others.

Prof. Hovanissian finishied his presentation with a heart-breaking video report about an old Armenian woman in her 80s, Tigin Baidzar, from Tigranakert. She and her husband Sarkis had lived together for over 50 years, however, only last year, the Kurdish Maire of Tigranakert agreed to marry them legally, as Sarkis had no birth certificate, he had been refused civil marriage before.

“They even had a huge wedding cake,” said professor Hovannisian smiling, “Few months later, Tigin Baidzar passed away… It hurts.”

Destinies of all those survivors, every single one of them so special, so unforgettable and so heroic, as living evidence of the few survivors of the Genocide, captured by renowned historian Richard Hovannisian for generations to come.