The photograph – never published before – was apparently taken in the summer of 1915. Human skulls are scattered over the earth. They are all that remain of a handful of Armenians slaughtered by the Ottoman Turks during the First World War. Behind the skulls, posing for the camera, are three Turkish officers in tall, soft hats and a man, on the far right, who is dressed in Kurdish clothes. But the two other men are Germans, both dressed in the military flat caps, belts and tunics of the Kaiserreichsheer, the Imperial German Army. It is an atrocity snapshot – just like those pictures the Nazis took of their soldiers posing before Jewish Holocaust victims a quarter of a century later.

Did the Germans participate in the mass killing of Christian Armenians in 1915? This is not the first photograph of its kind; yet hitherto the Germans have been largely absolved of crimes against humanity during the first holocaust of the 20th century. German diplomats in Turkish provinces during the First World War recorded the forced deportations and mass killing of a million and a half Armenian civilians with both horror and denunciation of the Ottoman Turks, calling the Turkish militia-killers “scum”. German parliamentarians condemned the slaughter in the Reichstag.

Indeed, a German army medical officer, Armin Wegner, risked his life to take harrowing photographs of dying and dead Armenians during the genocide. In 1933, Wegner pleaded with Hitler on behalf of German Jews, asking what would become of Germany if he continued his persecution. He was arrested and tortured by the Gestapo and is today recognised at the Yad Vashem Jewish Holocaust memorial in Israel; some of his ashes are buried at the Armenian Genocide Museum in the capital, Yerevan.

It is this same Armenian institution and its energetic director, Hayk Demoyan, which discovered this latest photograph. It was found with other pictures of Turks standing beside skulls, the photographs attached to a long-lost survivor’s testimony. All appear to have been taken at a location identified as “Yerznka” – the town of Erzinjan, many of whose inhabitants were murdered on the road to Erzerum. Erzinjan was briefly captured by Russian General Nikolai Yudenich from the Turkish 3rd Army in June of 1916, and Armenians fighting on the Russian side were able to gather much photographic and documentary evidence of the genocide against their people the previous year. Russian newspapers – also archived at the Yerevan museum – printed graphic photographs of the killing fields. Then the Russians were forced to withdraw.

Wegner took many photographs at the end of the deportation trail in what is now northern Syria, where tens of thousands of Armenians died of cholera and dysentery in primitive concentration camps. However, the museum in Yerevan has recently uncovered more photos taken in Rakka and Ras al-Ayn, apparently in secret by Armenian survivors. One picture – captioned in Armenian, “A caravan of Armenian refugees at Ras al-Ayn” – shows tents and refugees. The photograph seems to have been shot from a balcony overlooking the camp.

Another, captioned in German “Armenian camp in Rakka”, may have been taken by one of Wegner’s military colleagues, showing a number of men and women among drab-looking tents. Alas, almost all those Armenians who survived the 1915 death marches to Ras al-Ayn and Rakka were executed the following year when the Turkish-Ottoman genocide caught up with them.

Some German consuls spoke out against Turkey. The Armenian-American historian Peter Balakian has described how a German Protestant petition to Berlin protested that “since the end of May, the deportation of the entire Armenian population from all the Anatolian Vilayets [governorates] and Cilicia in the Arabian steppes south of the Baghdad-Berlin railway had been ordered”. As the Deutsche Bank was funding the railway, its officials were appalled to see its rolling stock packed with Armenian male deportees and transported to places of execution. Furthermore, Professor Balakian and other historians have traced how some of the German witnesses to the Armenian holocaust played a role in the Nazi regime.

Konstantin Freiherr von Neurath, for example, was attached to the Turkish 4th Army in 1915 with instructions to monitor “operations” against the Armenians; he later became Hitler’s foreign minister and “Protector of Bohemia and Moravia” during Reinhard Heydrich’s terror in Czechoslovakia. Friedrich Werner von der Schulenburg was consul at Erzerum from 1915-16 and later Hitler’s ambassador to Moscow.

Rudolf Hoess was a German army captain in Turkey in 1916; from 1940-43, he was commandant of the Auschwitz extermination camp and then deputy inspector of concentration camps at SS headquarters. He was convicted and hanged by the Poles at Auschwitz in 1947.

We may never know, however, the identity of the two officers standing so nonchalantly beside the skulls of Erzinjan. 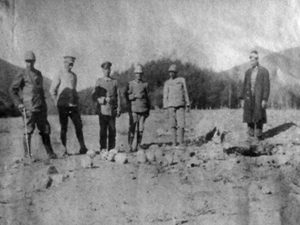