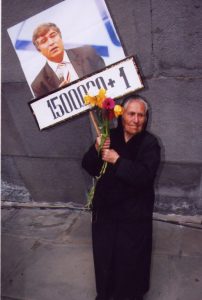 YEREVAN—I often think of Hrant Dink. I think about what I would have done had I been in his shoes as a journalist working in Turkey.

Would I have been so profound and daring with my editorials? So controversial and vigilant? Or would I have remained passive in the face of genocide denial?

It’s been 5 years since the Turkish-Armenian editor/columnist/journalist was gunned down in Istanbul, not far from his Agos newspaper office, leaving behind 3 children and a wife of 31 years.

To say it saddened an entire habitat of 8 million Armenians may be putting it mildly, not to mention the hundreds of thousands of Turks who still mourn his loss. His death captivated the world.

Dink was best known for advocating Turkish-Armenian reconciliation, marked by human rights in Turkey. He was often critical of Turkey’s denial of the genocide and was prosecuted three times for denigrating Turkish policies, while receiving numerous death threats from Turkish nationalists.

He walked a tight line, only to see it sag in the middle before finally losing his grip. But who can forget the man and his allegiance to his beloved heritage. He lived for it and ultimately died for it.

Two years ago while touring Armenia during the 95th anniversary of the genocide, my pilgrimage took me to the Armenian Genocide Memorial at Dzidzernagapert on the outskirts of Yerevan. Me and one million others—or rather, the entire population of this capital city.

To join a million people anywhere in the world is an imposing experience, let alone a monument. The wait was excruciating but tolerable, thanks to speakers along the way gushing out Armenian liturgical music.

I was holding a batch of flowers in one hand and a camera bag in the other. No matter where you looked, there was a photo opportunity to be had. Spring had awakened a sleepless population on this April 24th. Every worker and schoolchild kept the vigil secure.

Ninety minutes later, I found myself inside the monument where mountains of flowers already surrounded the eternal flame. Hordes of mourners were shuffling their way past the 12 pylons that represented each of the prominent villages devastated during the 1915 massacres and deportations.

Off to one side, set in the rear, was an elderly woman. She, too, held a bouquet. In the other hand was a poster attached to a wooden handle. She was dressed in black and appeared to be struggling with the sign, which featured a formal picture of Dink holding a microphone and the inscription “1,500,000+1,” noting the number of martyrs who succumbed during the 1915-23 massacres.

I was intrigued by the bystander, enough to approach her out of curiosity.

“Yes,” she answered. “I prefer it this way. People are more apt to study one sign than many. This is getting the attention it deserves. Hrant Dink died for us. He died for the people who come to this monument today and place their flowers. We owe him our gratitude for the attention he drew to this genocide.”

I offered to bring the woman a bottle of water, seeing she had none.

“How long have you been standing here?” I wondered.

“All day,” she revealed. “I came here at 6 a.m. so people could see my sign. I will be here until 9 p.m. By then, the flowers will be very high and most everyone will have come and gone.”

I was enamored by the woman. Though people couldn’t avoid her presence, they passed by her unnoticed, tending to the matter at hand. Young. Old. Those in between. All approached the eternal flame with their flowers and prayers.

Many tributes have been rendered to this esteemed colleague. Many have acknowledged and lauded his fine work. Heads of state and dignitaries around the world have kept the memory of Hrant Dink intact. And here was a solitary woman — one in a million — embracing the man with a sign, standing her ground.

Had the woman been at his funeral, where 200,000 mourners had gathered to protest the assassination, she would have been another face in the crowd.

The following year, a friend of mine toured Armenia in April and he, too, found his way to Dzidzernagapert. Upon his return home, he agreed to give a presentation to the community.

Included in his display was a photo of the very same woman, holding the very same sign, and striking a similar pose. Had the gentleman taken my picture and duplicated it, no similarity would have been detected. It was a mirror image.

Should you be in Armenia this year and run across the subject, please give her our very best. Let her know that her efforts are being appreciated by those of us here in America. And by those who rekindle the flame Hrant Dink lit, for all of us looking to escape the darkness of obscurity.