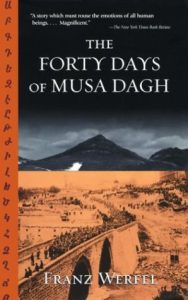 The theme drew inspiration from the Musa Dagh resistance to the Armenian Genocide in 1915, a saga that was immortalized by Franz Werfel in the novel The Forty Days of Musa Dagh.

“Mountains of Moses: Revolt, Resistance and Rescuing of the Victims of Mass Extermination in the 20th Century” was the theme of the First International Conference on Genocide Studies in the Czech Republic, held in the capital of Prague from June 18-20, 2012. The theme drew inspiration from the Musa Dagh resistance to the Armenian Genocide in 1915, a saga that was immortalized by Franz Werfel in the novel The Forty Days of Musa Dagh.

The conference was organized by the Archaeology of Evil Research Centre (AERC) as part of the NINE GATES Festival that annually promotes Jewish culture in the Czech Republic and elsewhere in Europe. This year’s festival, including the conference, enjoyed the patronage of the president of the Czech Parliament, the prime minister, a number of ministries, and the embassies of China, Spain, and Sweden.

The mission of the AERC is “to reflect causality and motives of historical genocides and mass violence on the basis of comparative interdisciplinary research, to gather specific primary and secondary data on genocides and mass murders during the world history, and explore new ways of dissemination of research results. Long-term objective of the centre is to introduce and establish the Genocide Studies discipline in the Czech Republic.”

The objectives of the conference were to introduce the scope and method of genocide studies in the Czech Republic; to analyze historical events of revolt, resistance, and rescue of the victims of mass extermination/genocides in the 20th century with regard to the relevant historical context; and to compare selected historical events on the basis of common aspects.

The opening ceremony took place on June 18 at the Viola Theater. Pavel Zuna, a well-known Czech TV personality, introduced the conference participants and invited Tigran S. Seiranian, the ambassador of the Republic of Armenia to the Czech Republic, to deliver the inaugural address. In his statement, Seiranian made reference to Werfel as a native son of Prague, informing the audience that on April 24 of each year the Armenian community in Prague places wreaths at the homes where the author was born and lived. Seiranian also indicated that the Turkish government continues to deny the Armenian Genocide, thereby continuing the process of genocide. A representative group of Armenians—including the Very Reverend Barsegh Pilavjyan, spiritual head of the Armenians in the Czech Republic, Slovakia, and Hungary; Hakob Asatryan, chief editor of the local Orer (Days) Armenian periodical; artists; and professionals—were also present.

The ambassador’s speech was followed by an impressive thematic performance of Czech poet Pavel Zajchek, titled “Lives? Or Vicious Circles?” with the accompaniment of the underground DG 307 band. The evening concluded with a reception.

On the following day, June 19, the conference began at the Protestant Theological Faculty of Charles University with a keynote lecture by Dr. Paul A. Levine, associate professor and docent of Holocaust history at the Hugo Valentin Centre, Uppsala University, Sweden. Titled “Genocide Studies Today: An Overview and Analysis,” the lecture briefly explored “the ‘histories’ of the two fields [Jewish Holocaust and Armenian Genocide], their conflicts and areas of growing comity, and what the future might hold for these two dynamic and multi-disciplinary scholarly fields, both of which have high and still growing social relevance.”

Next, in order to provide the audience—comprised mainly of professors, university students, diplomats, and other interested persons—with a general background about the Armenian extermination and dispossession, Andrew Goldberg’s hour-long documentary, “The Armenian Genocide” (2006), was shown on a large screen.

After the screening, Dr. Vahram Shemmassian, associate professor and director of the Armenian Studies Program at California State University, Northridge, and foremost scholar on Musa Dagh, took the podium to discuss and analyze “The Musa Dagh (Mountain of Moses) Resistance to the Armenian Genocide.” Based on Ottoman, German, French, British, American, and Armenian archives, his paper covered the following issues: causes of the genocide; pockets of resistance; introduction to Musa Dagh society; conditions on the eve of the deportation order; existential dilemmas and hard choices; the resistance machine (consisting of two components, one civil and one military); major battles; rescue operations by the French 3rd Mediterranean Squadron; the relocation of survivors to a camp near Port Said, Egypt; echoes of the episode in the contemporary international press; and the impact of Werfel’s novel on Armenians and Jews especially.

“The Musa Dagh struggle continues after 97 years,” Shemmassian concluded. “It is a fight against the denial of the Armenian Genocide, because denial is the last act of any genocide. This struggle belongs to all of us, not just the Armenian people. If the slogan ‘Never Again’ should mean anything, we must unite to prevent criminal minds from being born. No economic, political or strategic considerations should take precedence over the recognition and prevention of genocides. Realpolitik cannot be more important than humanity itself; a line must be drawn to preserve civilization. It is my ardent wish and hope that international conferences such as this will bring us closer to forming a united front, not just intellectually but also practically, in defeating genocidal tendencies before they are hatched and actualized.”

Shemmassian also gave a PowerPoint presentation of vintage photos from his extensive private collection depicting the rescue scenes by the French Navy, the Port Said refugee camp, the Red Cross flag that saved the Musa Dagh-ians, and the inauguration in 1932 of a memorial monument at Damlajik on Musa Dagh dedicated to the heroic feat, as well as a fenced graveyard for the 18 fighters who had lost their lives during the 1915 battles. A question-and-answer session followed.

Tatevik Lazaryan of “Azatutyun” (Liberty) radio in Armenia and Hakob Asatryan of Orer magazine then interviewed Shemmassian separately on a broad range of Armenian issues including, but not limited to, the controversial protocols signed between Armenia and Turkey, and planned activities pertaining to the 100th anniversary of the genocide worldwide. Shemmassian similarly granted an interview to Reflex, a respected weekly magazine published in Prague with a wide circulation (60,000 printed copies and a total readership of 270,000 as of January 2010, according to Wikipedia). The interview is scheduled to appear in mid-July 2012.

The “Nanjing Massacre” video presentation constituted an introduction to the Chinese component of the conference. Zhang Boxing and Li Jiangyong from the Nanjing Massacre Museum in China, subsequently lectured on the “Nanjing Safety Zone: The Rescue of Citizens during the Massacre in Nanjing.” They analyzed the establishment, role, and significance of that zone in the context of the Sino-Japanese War in the 1930’s. The day ended with Charlie Chaplin’s 1940 movie, “The Great Dictator.”

On June 20, Alejandro Baer, from the Institute of Sociology, Ludwig Maximillians-Universität, Munich, Germany, talked about “The Rescue of Jews by Spanish Diplomats during the Holocaust: Facts, Myths, and Memory Politics.” He explained that the close ties that Spain maintained with Germany throughout World War II enabled some diplomats to grant protection to the victims. This fact was later used as an argument by the Franco government to try to escape from the isolation to which the international community had condemned Spain after the war. The myth that Franco helped the Jews during the Holocaust is sustained in Spain until today.

A related subject was examined by Prof. Paul A. Levine, namely, “Raoul Wallenberg’s Rescue Activities in Budapest: Myth, or History?” He clarified the fascinating but often troubling relationship between myth and history, a distinction that is of particular importance for the field of Holocaust/genocide studies.

The afternoon session began with two documentaries, “Revolt in the Sobibor Camp” and the “Living Dead.” Dr. Igor Bartosik, a historian-researcher at the Museum Auschwitz Birkenau, Poland, then delved into the “Underground Activity and Revolt of Prisoners from the Sonderkommando KL Auschwitz” in a comparative approach, all along showing hitherto unknown documents and pictures. The conference ended with concluding discussions and remarks by the organizers and participants.

Following the conclusion of the conference, the Turkish Embassy in Prague contacted and held a meeting with two of the main organizers of the conference, Simon Krbec and Pavel Chalupa, to lodge a complaint regarding the inclusion of Musa Dagh (i.e., the Armenian Genocide) in the program. It was a “controversial historical event,” the Turkish officials contended, and therefore other scholars should also have been invited to tell the “other side” of the story. Krbec responded: “We are not dividing historical research into some national or opposite sides, that we follow the mainstream of research on genocide studies in the world. … [t]he International Association of Genocide Scholars recognized the Armenian Genocide as genocide. So we don’t see a reason to invite some Turkish researchers.” Krbec and Chalupa also mentioned President Barak Obama’s annual statements about the “Great Calamity.” At the end of the encounter the two organizers were given books about the Turkish version of what happened, and were invited to Istanbul to study the Turkish archives.

“Mountains of Moses” was a serious and successful event, one that added to the growing number of international conferences on the subject of genocide. The organizers plan to publish the proceedings and hold similar symposia annually, with different themes.