History of the Armenian Church 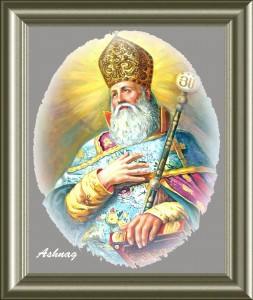 The Church was founded by Jesus Christ (1). According to tradition, two of His Apostles ― St. Thaddeus and St. Bartholomew ― preached His Gospel in Armenia as early as the second half of the first century. Then in the early fourth century St. Gregory the Illuminator formally established the Church in Armenia, when King Tiridates III was baptized and declared Christianity as the state religion (2). Indeed, the Christianization of Armenia “determined the entire future course of Armenian history” (6).

St. Gregory (c. 240-325 AD) was a descendant of a noble house in Parthia, who was brought up as a Christian in Cappadocia. He was consecrated a bishop by Leontius, the metropolitan of Caesarea, as the first Bishop of Armenia (3). He began his missionary work in Armenia during the first decade of the fourth century, while a layman ― and upon is consecration as Bishop ― he established the Armenian nation’s Holy See in Vagharshapat (Etchmiadzin) (4). He is called Illuminator for “enlightening the nation with the light of the gospel” through baptism (5). Etchmiadzin, literally, means “the only begotten descended.” According to tradition, St. Gregory saw Christ in a vision, who indicated to him where to build His Church, the first Armenian Church.

As the new Faith took roots in the life of the nation, the invention of an Armenian alphabet was necessitated. Realizing the needs of the Armenian faithful, in 406, St. Mesrob Mashdotz (7) created the Armenian alphabet, under the auspices of Catholicos Sahag (8), in order to make the Christian faith accessible to the people in a written form. Greek and Syriac were the languages used in the church services.

Soon after the invention of the alphabet, St. Mesrob together with St. Sahag and a group of associates ― known as Holy Translators ― translated the Holy Scriptures into Armenian, followed by the biblical, theological and liturgical writings of eminent church fathers. This most important era is known as the Golden Age of Armenian history. “The missionary and literary labors [of this period] shaped the destiny of the Armenian people and Church for succeeding generations. [St. Mesrob and St. Sahag, their disciples and co-workers] spearheaded the creation of the Armenian Christian culture under the patronage of the King Vramshapuh. This period was one of intense activity and rapid development for the Church and was decisive in its consolidation and nationalization” (9).

One of the most significant events in Armenian Christianity is the battle of Avarair. Toward the middle of the fifth century, Armenia faced growing pressures from the Persian King Yazdegert II, who had issued an edict bidding the Armenians to renounce Christ and embrace Zoroastrianism (10). In 451, headed by the commander-in-chief Vartan Mamikonian, Armenians fought against the Persians to ……..