Pope Francis offered prayers for the victims of the Armenian Genocide at the Dzidzernagapert Memorial, where he arrived with Catholicos Karekin II and was greeted by President Serzh Sarkisian and First Lady Rita Sarkisian. 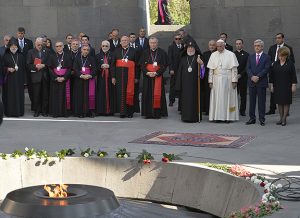 Upon his arrival at Dzidzernagapert, the pope offered a silent prayer and placed a wreath, as well as a white and yellow rose, to signify the official colors of the Vatica, by the eternal flame.

The pope and Karekin II held an ecumenical service in memory of the victims of the genocide, which included reading of passages from the Bible. The ceremony also included a duduk performance by Djivan Gasparyan, Gevorg Dabaghyan, and Kamo Seyranyan.

While at Dzidzernagapert, the pope also planted, watered and blessed a fir tree at the Memory Alley of the Memorial Complex. He then made his way to the Armenian Genocide Museum-Institute, where he signed the guestbook. 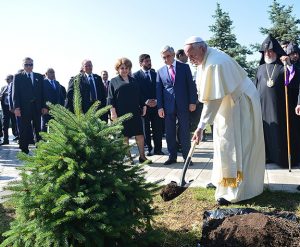 “I pray here with sorrow in my heart, that there might never again be tragedies like this one, that humanity might never forget, and might know how to overcome evil with goodness; may God grant to the beloved Armenian people and to the whole world peace and consolation. May God preserve the memory of the Armenian people. The memory must neither be watered down nor forgotten; memory is the fount of peace and of the future,” the pope’s message read. 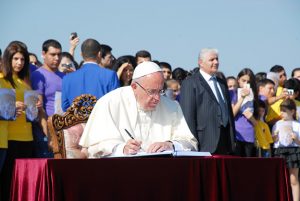 At the Museum-Institute, the Pope was presented with a gold commemorative medal. The Pope also met with ten descendants of Genocide survivors who had found safe haven in the Vatican apostolic palace of Castelgandolfo in the 1920’s under the pontificate of Pius XI, reported Vatican Radio.

From Dzidzernagapert, the pope traveled to Gyumri where he was joined by the Ordinary of Eastern Europe for Armenian Catholics, Archbishop Raphael Minassian. They, along with the Catholicos, conducted a Mass in Vartanants Square, where the Pope remembered St. Gregory of Narek.

“All the same, we might ask ourselves: how can we become merciful, with all the faults and failings that we see within ourselves and all about us? I would like to appeal to one concrete example, a great herald of divine mercy, one to whom I wished to draw greater attention by making him a Doctor of the Universal Church: Saint Gregory of Narek, word and voice of Armenia,” said the pope.
The Pope’s Message:

“It is hard to find his equal in the ability to plumb the depths of misery lodged in the human heart. Yet he always balanced human weakness with God’s mercy, lifting up a heartfelt and tearful prayer of trust in the Lord who is ‘giver of gifts, root of goodness… voice of consolation, news of comfort, joyful impulse… unparalleled compassion, inexhaustible mercy… the kiss of salvation’ [Book of Lamentations, 3, 1]. He was certain that ‘the light of God’s mercy is never clouded by the shadow of indignation’ [ibid., 16, 1]. Gregory of Narek is a master of life, for he teaches us that the most important thing is to recognize that we are in need of mercy. Despite our own failings and the injuries done to us, we must not become self-centered but open our hearts in sincerity and trust to the Lord, to ‘the God who is ever near, loving and good’ [ibid., 17, 2], ‘filled with love for mankind … a fire consuming the chaff of sin [ibid., 16, 2],” said the pope, according to a translation of his statement provided by Vatican Radio.

“In the words of Saint Gregory, I would like now to invoke God’s mercy and his gift of unfailing love: Holy Spirit, “powerful protector, intercessor and peace-maker, we lift up our prayers to you… Grant us the grace to support one another in charity and good works… Spirit of sweetness, compassion, loving kindness and mercy… You who are mercy itself… Have mercy on us, Lord our God, in accordance with your great mercy,” added the pope.

In his remarks, the Catholicos said that “Gyumri is one of those historical towns of Armenia where centuries-old Armenian Christian values have flourished.” He also spoke of the people of Gyumri as “bearers of a beautiful tradition of Christian brotherly coexistence.”

Pope Francis spoke of the devastation following the earthquake and gave thanks for all that was rebuilt. He highlighted the three “stable foundations” of a nation’s spiritual future: memory, faith, and merciful love.

Following the service, the Pope visited the Our Lady of Armenia convent and orphanage, where he had lunch with around 60 children.

The Pope, together with Karekin II, also visited the Holy Mother of God Armenian Apostolic Cathedral and the Holy Martyrs Armenian Catholic Cathedral of Gyumri in the afternoon, before heading to the airport from where he flew back to Yerevan.