Growing Old in Armenia: The trouble with pensions

Part two of a four-part series

The tinny noise of silverware and clatter of plates mingles with the sound of muffled voices and the smell of freshly cooked pasta at the Shengavit Soup Kitchen in Yerevan. The imposing cafeteria, with its ornate stucco ceilings, feels stifling in the summer heat as more than a hundred elderly line up for food and crowd around the makeshift plastic tables to eat. 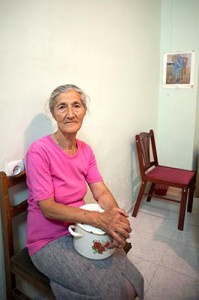 While life expectancy and healthcare have improved in recent years, the throngs of pensioners waiting for a hot meal bear witness to Armenia’s lingering economic woes. With pensions as low as 31,000 drams ($75) a month, in a country where inflation has been steadily driving up prices, almost half a million elderly struggle to make ends meet.

Sona Hovakimyan, a 25-year-old social worker at Mission Armenia, the non-governmental organization running the Shengavit Soup Kitchen, is well aware of how harsh life can be for her elderly clients. As the sole caretaker of almost 150 impoverished pensioners, she says her job description is sometimes overwhelming.

“Old people need information because they don’t know how to protect their rights or they have no skills to do the things they need,” she says, sitting in her cramped but sunny office as some of her clients shuffle in from the hallway. She greets them warmly. “We try to make their life more positive and help them solve their problems,” she says.

For some elderly, conditions are particularly dire. While heating and gas were unavailable during the war with Azerbaijan in the early ‘90s, Hripsime Kirakosyan, president and co-founder of Mission Armenia, says soaring prices still make utilities inaccessible.

One hundred-year-old Yelena Abrahamyan is one of the well over 4,000 beneficiaries of Mission Armenia. According to Nurik Daghunts, the head of the Social and Healthcare Services Department at the organization, the elderly woman was destitute and alone. “She was a talented artist,” Daghunts says. “But we found her with frozen fingers because she couldn’t pay for heating.”

Today, Abrahamyan has resumed painting and has written a book of memoirs based on her experience as a survivor of the Armenian Genocide. Daghunts points to a painting hanging on the wall at Mission Armenia’s headquarters. A vase filled with delicate white and lilac flowers fills the frame. “She gave it to us as a sign of her gratitude,” Daghunts says.

Sixteen percent of Armenia’s population has already reached retirement age. And, despite the support of non-governmental organizations such as Mission Armenia, programs such as the Armenian General Benevolent Union’s soup kitchens for elderly, and other charities, a rapidly aging population will soon be sorely affected by the country’s pension problem.

Though most working adults pay as much as 26 percent of their salary in pension-related taxes, the average pension hovers below the official minimum amount required for subsistence of 33,500 drams ($81).

“We inherited the pay-as-you-go system from the Soviet Union where each generation pays for the next,” says Arman Udumyan, a partnership development and fundraising officer at the Pension System Awareness Foundation.

According to Udumyan, whose organization is partly funded by the government to increase awareness about an upcoming pension reform, the old system is no longer sustainable. With an aging society, high unemployment and the steady emigration of younger generations, overall taxable income has greatly decreased. The problem is further exacerbated by what Armenians call a “shadow economy” where a certain number of employers, with the acquiescence of their employees, underreport their actual income to avoid taxation.

While the situation is difficult, not all news is gloomy. A new mandatory pension reform allows 16 to 40-year-olds to create their own personal pension accounts and to plan for retirement. These workers can monitor their accounts and choose how they would like to invest their savings.

While many remain skeptical of the new reform, Udumyan says the recent changes carry some advantages. From increased control over personal pension plans and stricter tax surveillance, to the development of information and communication technologies, Udumyan says the system will become more transparent.

But even the reform won’t solve the urgent pension problem any time soon. Armenians will only begin to see the changes in 2037, when the first age group under the new pension system is expected to retire. “The reforms will not affect this generation of pensioners,” Udumyan says. “Only the next generation will be better off.”

Anahit Gevorkyan, the deputy head of the Department for Disabled and Elderly Issues at the Ministry of Labor and Social Affairs, agrees that the reform will bring little relief to seniors today. “I won’t be able to benefit either—I will have a low pension,” she says.

But despite an inadequate government budget, Gevorkyan says the situation is improving. “Just 20 years ago, Armenia didn’t have any structures to support the elderly” she says. “Now we have 5,000 beneficiaries of personal care in their homes, 1,250 nursing homes and 2,500 day care centers.”

The government is also working on a long-term strategic action plan to improve the situation. The objectives of the project include training gerontologists to focus on issues affecting the elderly, building apartments for homeless older adults, creating Armenia’s first hospice, which would offer palliative end-of-life-care, and opening five additional day care centers for seniors.

“I hope the strategic plan will be approved,” Gevorkyan says about the government project which is currently under discussion. “Even if only 20 percent of [the plan] is actually financed and implemented, there will be big changes in the quality of life for the elderly.”

Back at the Shengavit Soup Kitchen, the seniors who have finished their meal are eager to share their stories. Svetlana Ghazarian, 71, sits in a rickety chair in the center’s spartan but comfortable counseling room. A print of Van Gogh’s “Old Man in Sorrow” hangs in the background. In it, an elderly man with wisps of white hair sits in a bare room, his head buried in his clenched fists.

Like many others at the soup kitchen, Ghazarian is not only living on her meager pension, but supporting her family as well. With a 32-year-old disabled daughter and a 4-year-old grandson, the small family is left to survive on 50,000 drams ($120) a month.

“We live only up to the 20th of every month,” she says through an interpreter. “When we pay for gas and electricity there is nothing left for anything. Ten days before the end of the month our only help is Mission Armenia.”

In addition to poverty, domestic violence also plays a part in her daily struggles. “My daughter sometimes beats me when we don’t have food,” Ghazarian says, tears streaming down her face, holding up her hands covered in bruises and welts.

But while reforms may be long in coming, Ghazarian and the other elderly crowding in the bare counseling room agree that non-governmental organizations such as Mission Armenia have changed their lives. And in some cases, things are already improving.

“I’m very satisfied because many years ago there wasn’t all the help we have now,” says 74-year-old Rosa Hakobyan, who also cares for a disabled daughter while surviving on her meager pension. “Before, we didn’t even have shoes to wear.”

Sitting with her back to the wall, wearing a bright pink T-shirt, Ghazarian conveys a sense of stoic acceptance. When asked about her hopes for the future, she answers simply “I need something to eat and something to wear—nothing more.”