Graves in the Park: Notes from the ‘Bolis’ Uprising

I haven’t had time to digest what I saw this past week on the heels of my first journey to the womb of Armenian civilization: Van/Vaspurakan. Dikranakert. Kharpert, the fabled green villages of Bitlis, and the hinterlands of Palu and Sakrat. My fellow travelers, now brothers and sisters for life, trekked across these majestic and cruel roads that hold many secrets. The stubborn rocks jetting from the earth gave us anchor. The mud-covered ruins inside the Armenian cemetery in Edremit in Van, though, put holes in our hearts as we stood before it, bulldozed and abandoned, next to the fresh asphalt of a curving street. It was not development. It was erasure. Rest assured that the bones, now dust, still silently scatter on spirits like us who wander through these roads seeking ancestral root. Not politics, nor the millions spent on genocide denial, can change what remains in the crevices of these stones, where our dead lie buried and anonymous but never forgotten. Perhaps that is the last defense of a people that has been erased from its historic cradle—to hold a flame to memory and preserve what remains of a civilization that flourished once upon a time in Historic Armenia. 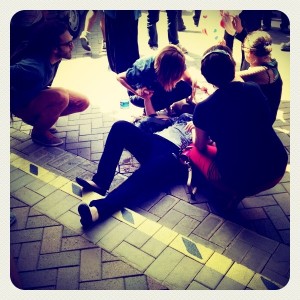 A snapshot from Taksim (iPhone photo by Eric Nazarian)

We had gone in search of our ancestral past and found unbelievable gifts, including a heartbreaking encounter with the last 98-year-old Armenian survivor of the genocide in Chunkush. And just days after these encounters on the road, something happened in Bolis that may or may not signal a seismic shift in the public awakening and politics of Turkey. I wish I could be more exact, but it’s a very brittle transitional phase “over there”; the effects of this uprising have yet to be defined once the smoke and mirrors clear, and deals start being negotiated between the powers-that-be and the opposition—saddled with grievances and proofs of injustice that can surely be stacked as high as Musa Dagh in the wake of what world news has broadcast this past week.

I am back in Los Angeles but a part of me is still under the wafting tear gas clouds that were fired indiscriminately at civilians in Taksim Square. Protesters, senior citizens, schoolchildren, street vendors, and tourists were all fair game. Everyone was fodder and none walked away from these streets unaffected by what they witnessed. On the heels of returning from the majesty of Historic Armenia, I had returned to a seemingly business-as-usual Bolis that exploded into a national movement against the policies of Prime Minister Erdogan and his administration.

The Revolution Will Be Tweeted

I was there at the Divan Hotel, just off Gezi Park, on the day the straw broke the camel’s back. The protesters had been kicked out of the park, and construction fences—stamped with Polis in dark blue—now cordoned off one of the last patches of green in Istanbul. Behind the fence were uniformed paramilitary police officers strapped with tear gas and pepper spray, and giant trucks with water canons where the turret of a tank would be.

Slowly fumes wafted toward the hotel. Two women dropped from the smell; even though there was no time to do a Q&A, they were showing all the signs of asthmatics suffering from asthma attacks no doubt aggravated by the tear gas. We surrounded the first lady and carried her in. In a blink, despite the growing number of civilians passing out by the indiscriminate tear gas, several more projectiles were fired directly at the crowd. The protesters scattered as a projectile pounded a well-known investigative journalist, Ahmed Sik, right in the head. Blood-covered, he was hurried to the hospital.

A simple protest in the park soon went viral and international. The seeds of the uprising, now spread to cities across Turkey, was sparked and aggravated by a disregard for civilians by men hired to uphold the peace. Perhaps we will never know why these protesters were subjected to such violence. Regardless of what may or may not change the political dynamics in Turkey, nothing will change the story of the cook that held claim to this very plot of land now crawling with well over 200,000 people chanting cries of justice, and expressing rage against the machine of Erdogan that was slowly eroding their freedoms. 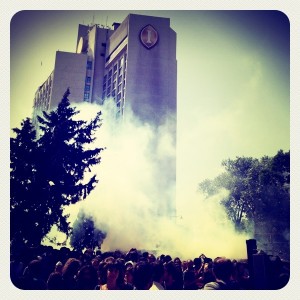 At the risk of sounding Orientalist, when a friend of mine asked what Istanbul felt like I could only think of the slabs of meat that in the U.S. we call shawarma. In Istanbul they call it doner. It’s quite a sight to behold: a fast-food cook hauling a massive gob of pressed, ground, and oily chicken or beef, marinated, put on a vertical spit, and slow roasted. Like the doner slab, Istanbul is nothing if not a massive mash-up of Roman, Byzantine, and Ottoman civilizations. At the center of this historic city stands a park in Taksim, and under it lies another spicy layer of the city’s labyrinthine history.

This story is well known and still often told in Bolis. In the 16th century, there was a plot to assassinate Suleiman the Magnificent. The assassins got to the sultan’s cook, an Armenian from Van, with an offer to kill the sultan. The cook refused, informing Suleiman and saving his life. For his loyalty, Suleiman asked the cook to choose a gift, and it would be granted.

The cook asked for land where Armenians could bury their dead. The sultan officially decreed a sizable plot of real estate in Bolis where Armenians could build a final resting place for their families. That real estate became the Surp Hagop Armenian Cemetery, which at this very moment lies buried under the Divan and Intercontinental Hotels and Gezi Park. In the crowd at Gezi now are Armenians and Turks standing shoulder-to-shoulder, carrying placards that read, “Nor Zartonk” (New Awakening), highlighting through the magic marker that Gezi was once an Armenian cemetery. A photo posted on Facebook shows a cardboard grave erected in Gezi with the words Surp Hagop Ermeni Mezarligi [Armenian Cemetery] 1551–1939. Below it on a yellow sheet are the English words: “You captured our graveyard, but you can’t capture our park! Armenians from Turkey NOR ZARTONK.” This prime stretch of real estate, which was private Armenian property officially decreed by Sultan Suleiman, was confiscated in 1939.

Istanbul is ripe with the ironies and cruelties of history. The story of the cemetery’s confiscation after hundreds of years of existence is but another example of the forced erasure that my friends and I witnessed in the ravages of the cemetery in Edremit, overlooking the timeless Aghtamar Island. In Edremit, there were the weather-beaten and toppled gravestones. In Taksim, there are the voices of the young Zartonk Armenians combating oblivion by telling stories, making and circulating images, and being heard and seen online.

Today in the park stand many different people from all factions of life who don’t necessarily agree with those who initially stood their ground to save the park. Will the protesters ever know what’s buried under Gezi and Divan Hotel? Will it matter to them in the long run? How will this movement affect Armenian-Turkish relations, and to what extent when the noise dies down? It’s all too soon to tell.

Imagine if Armin Wegner had an iPhone 5 during the Armenian Genocide that could record video? This past Saturday, we went for a very long walk on the same boulevard where we saw the pangs of this movement and the asthmatic woman, whose name, or fate, I probably will never know. Away from the smoke and chaos, I kept wondering about the questions that ran through Wegner’s mind when he documented the genocide. The need to document injustice, atrocity, and the erasure of a cultural past is also the fundamental role of those who stand on the side of human rights. In the thick of the parade on the streets, I was irritated by the sight of vendors selling gas masks and surgical face masks for the price of an arm, and the newly married couple driving up and down the street with their video entourage filming as thousands cheered them on.

My mind wandered back to the soggy graves in Van where we photographed the abandoned remains of gravestones that will likely not be there the next time we return. Even if the nameless and faceless powers-that-be continue to destroy them, any act of resistance we can initiate can hopefully help preserve that piece of our cultural heritage.

As I watched the wedding entourage cruise through the boulevard where the late Hrant Dink was murdered, I wrote in my notebook: I want to not live in fear, come what may. Regardless of landscape or country, to bear witness to injustice, even if I can’t stop it, is something worth doing if it can make a lasting difference for the good.

In the morning, the fight was about the park. By late afternoon, it had spiraled into a conscientious battle for freedom and human rights. A generation woke up armed with Facebook, Twitter, and YouTube against the guns. The protest continued peacefully for the most part, minus the jackasses throwing up ugly graffiti on school walls and bus stops. The well-intentioned protest (to a certain extent) became a bit of a Mardi Gras-style parade Turkish-style minus the jazz. The boulevard was peppered with thousands of crushed water bottles, shattered glass, and youth sipping Tuborg, Efes, or Bomonti beer, mock-saluting Erdogan in defiance of his ban on the public consumption of alcohol.

En route to Munich, I read a quote in the Lufthansa in-flight magazine from “Sunshine” Sonny Payne, an American radio show host, who said of American blues music, “Real blues should be taken in small sips…it’s just like learning to drink whisky. Take small sips, or else the blues will knock you down.” There are no truer words to describe the feeling of both bearing witness to the ancient remains of Historic Armenia and the current political tinderbox in Bolis.