Marimba, violin, flute, piano, voice… Armenian soloists accompanied by AGBU London Chamber Orchestra under the baton of Brazilian conductor Gustavo Ubeda delighted London audiences on Saturday on the 7th of November 2015. The concert was organised by AGBU London Chapter dedicated to the centenary of the Armenian Genocide entitled Together for Armenia. 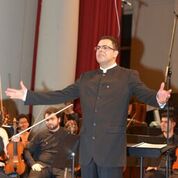 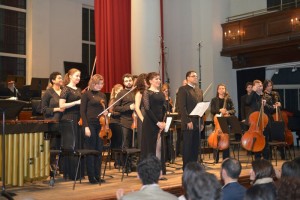 As London is unarguably one of the major hubs of classical music of the twenty-first century, the formation of AGBU Chamber Orchestra in London has undoubtedly been a wonderful and commendable idea. It was initiated in 2014 by pianist Sarkis Zakarian, who has become the Artistic Director of the Orchestra; meanwhile acclaimed violinist Levon Chillingarian, OBE, has been appointed the Patron of the newly formed orchestra. This truly international orchestra has reunited not only aspiring musicians of Armenian origin, but other gifted instrumentalists from around the world. Gustavo Ubeda from Brazil has been appointed the main conductor of the orchestra.

The programme of this aut 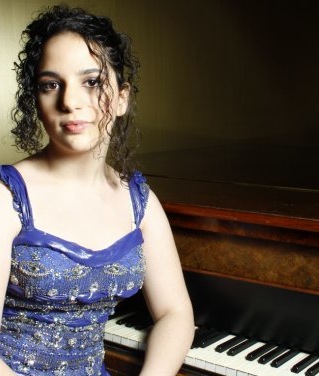 umnal concert at prestigious St. Smith’s Square was as diverse and original as the gifted soloists themselves. In the first section of the programme, young composer Kristina Arakelyan – award-winning final year student from RAM – performed her new composition entitled Asum en (They Say in Armenian) dedicated to the victims of the Armenian Genocide, written for voice and piano inspired by Gevork Emin’s poem. Anais Heghoyan, London-based mezzo soprano, interpreted beautifully the vocal part of Kristina’s piano duo.

One of the highlights of the evening was certainly the world premiere of Epithaph, Dance and Hymn by British violinist, pianist and composer Roland Roberts, written for violin and orchestra. Acclaimed violinist Ani Batikian interpreted the new piece with great intensity and emotion. The composition, written especially for this concert by Roland Roberts – is a tribute to the Armenian victims of the Genocide – was inspired by Armenian spiritual and folk melodies that left the audience deeply moved by the beauty and purity of the music and stunning interpretation. Sitting in the audience, and contemplating this three part variations about the macabre struggle, the sorrow and the revival of a nation, it was hard to believe that the music was written by a non-Armenian artist. 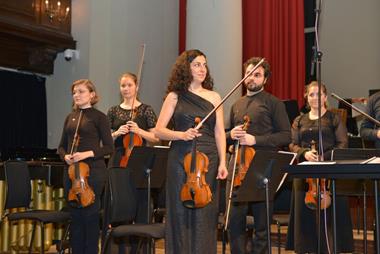 One hopes that Ani Batikian would include this stunning composition in her wide-ranging playlist during her future concerts.

Young flautist Nairi Azizian from Helsinki had chosen a less known piece by great American composer Alan Hovhaness entitled Elibris. Alan Hovhaness, with Armenian and Scottish heritage, had sourced his composition not merely from Armenian sacred music but also from Indian holistic melodies. The flute solos were executed masterfully by Nairi Azezian and demonstrated her adroit technique and mature artistry.

“When I was given the opportunity to perform in London, I decided to choose a fresh piece, something that would be interesting for both Armenian and non-Armenian public”, said Nairi after the concert. Alan Hovhaness is precisely that composer: famous and well-acknowledged, at the same time mystical and faraway. Interesting that Nairi lives and works in the homeland of great composer Jean Sibelius, the lifelong inspirational friend of Alan Hovhaness himself.
“Nairi will be joining the prestigious Helsinki Philharmonic Orchestra in January 2016”, confessed with unhidden pride the Finnish mother of Nairi Azezian, who has mixed Armenian and Finnish heritage. Nairi’s father was born in Aleppo, Syria and later moved to Finland, where he is renowned surgeon.
“My grandmother and my father’s family members are still trapped in Aleppo, and we have no news from them, as the communication lines have been blown up”, said the young musician with alarming tone in the voice. 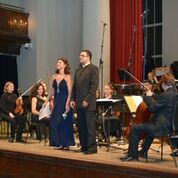 The last piece before the interval was an energetic composition for marimba and orchestra entitled Dzon (Homage in Armenian). This piece was written by Massachusetts based composer Dr. Pasquale Tassone for percussionist Sylvie Zakarian, who currently lives and works in Arlington, Massachusetts, hometown of Alan Hovhaness. In fact, this piece was completed in 2011 for the 100th anniversary of the great composer. It comprised of three contrasting sections, where several Armenian folk melodies had been borrowed. The middle section was an unexpected waltz à la Shostakovich, followed by technically challenging solo on marimba. Sylvie Zakarian’s mesmerizing four-mallet technique and infectious passion for her instrument kept audiences on the edge of their seats throughout the performance, followed by prolonged ovation at the end. 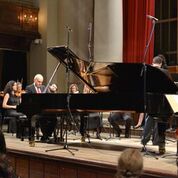 In the second half of the concert, pianist Sarkis Zakarian from Bulgaria performed Beethoven’s Piano Concerto Number 5, also known as “Emperor Concerto” – the final piano concerto of the German composer. Mr. Zakarian is award-winning pianist, currently working in London, where alongside his solo career, he is teaching piano and leading piano masterclasses. Sarkis Zakarian’s interpretation was convincing from the opening bars of the first movement, where he demonstrated flawless technique and restrained expressiveness. In the second slow movement Zakarian revealed the lyrical tension of Beethoven’s masterpiece. The third movement reiterated the central theme, meanwhile the melodic encounter between the piano and the orchestra confirmed the intense tumult and unrest in Beethoven’s (and our) world. The sweeping piano shifts were smoothly and beautifully executed by the pianist culminating the concerto with an uplifting affirmative finale. The long standing ovation from the public said it all. 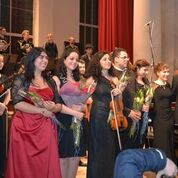 “I am so proud for the achievements of our talented new generation, everyone here, including my daughter”, admitted the proud mother of Kristina Arakelyan, the prize-winning composer aged just 21. And why she should not be? Armenians through centuries have embraced the Western culture, integrated and flourished in their host countries, at the same time remaining close to their roots – those handful of young musicians in the concert are the living proof of the nation’s revival in the Diaspora due to their hard work and dedication to universal human values.
The remembrance concert at St. Smith’s Square organised by AGBU London chapter was very well attended by Armenian and non-Armenian music lovers that greatly appreciated the excellent performances of the Armenian soloists invited for this special occasion to be Together for Armenia with Music.