On Saturday 16 March, the Armenian Community in Egypt gathered at the Kalusdian-Nubarian Armenian School in Heliopolis to listen to the Arax Choir conducted by Mihran Ghazelian. The event commemorated the 110th anniversary of the birth of Armenian composer Aram Khachaturian (1903-1978).

Khachaturian lived in a time after Armenia was annexed to the Soviet Union in 1922, regaining its independence only in 1991 — longer after he dies. Khachaturian is best known for his ballets Spartacus (1954) and Gayane (1942). The latter features the famous “Sabre Dance” representing an Armenian war dance and is a frequently performed composition. To the Egyptian audiences, Khachaturian’s name is usually linked to the Spartacus ballet, one of the Cairo Opera Ballet Company’s more remarkable works.

But Khachaturian’s musical richness was not limited to the mentioned ballets; his many compositions, which continuously combined Western classical music with Armenian folklore elements, are equally interesting. Khachaturian’s family fled Tbilisi, the capital of Georgia, at the time home to Armenian population. In 1934, he graduated from the Moscow Conservatory and started gaining considerable recognition and success. Under Stalin, Khachaturian found himself “guilty” of formalism. Because his music did not reflect socialist ideals, it was labelled by the regime as anti-people. “It all happened in the blink of an eye. Suddenly I was an anti-people composer,” Khachaturian writes in his memoirs, remembering a decree issued by the Central Committee of the Communist Party of the Soviet Union in 1948, condemning him alongside Prokofiev and Shostakovich. The composers were asked to apologise and returned to the state’s favour a few years later.

“I was told I was estranged from my Armenian roots and I had become cosmopolitan. They sent me to Armenia as punishment. It became my salvation. I was in a land I had always cherished, a land that had nourished my music again and again.” Throughout his life, Khachaturian was taking music from the Armenian people, and then giving it back to them. “My father was a peasant, an illiterate man who would turn himself into a master book binder, rising above his humble beginnings. Now his perseverance would be my inspiration. My mother gave me my love of music. Throughout my return to Armenia I heard her voice singing her folk songs, the lullabies; the songs passed down to her from her own parents and her voice echoing inside my head was a constant comfort to me.” Khachaturian composed hundreds of works for orchestra: symphonies and works for small formations; ballet, concertos for violin, solo piano works, film scores as well as music for children. 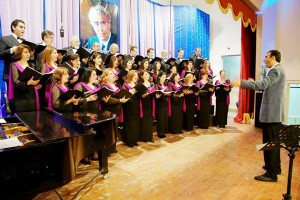 The concert by the Arax Choir included a few of the original choral works by Khachaturian based on folkloric songs, while other songs were based on by Khachaturian’s music, with lyrics written by Mihran Ghazelian, the choir’s conductor and artistic director. The evening also included short dance numbers to Khachaturian’s music and a documentary film about the composer. Though attended mostly by Armenian-Egyptians, this event, like all other concerts organised by the Armenian community, was open to the public. It is evident that the community cherishes its culture by taking meticulous care with all the artistic and logistic sides of the event. This includes providing rich programme notes, printed — alas — in Armenian only.

Operating under the Armenian Prelacy of Cairo, the Arax Choir goes back to the 1990s. However, back then, the choir had a different name, Zevartnots, and was conducted by David Zalyan, who was succeeded by conductor Hrant Aghajanian, a music and arts teacher, one of the important mediators of Armenian culture in Egypt. Finally, in 2003, Mihran Ghazelian became the choir’s conductor and artistic director, changing its name to Arax. Under Ghazelian’s management, Arax expanded to include over 30 amateur singers, including four voices, men and women.

The first performance of the choir under the name of Arax was on the occasion of the 1700th anniversary of foundation of the Mother See of Holy Etchmiadzin (in 303 AD), the oldest church built by a state in the world and the spiritual headquarters of the Armenian Apostolic Church. Since becoming Arax, the choir has given a number of concerts in Cairo and Alexandria. In 2009, its performance at the Bibliotheca Alexandrina was received with acclaim. On several occasions, the choir took part in the Egyptian Churches religious songs festival organised by the Coptic Church. Last summer, for the first time, Arax travelled abroad to participate in the choral works festival organised in Yerevan, Armenia. Arax also takes active part in the Armenian community’s commemoration events, such as the Armenian Genocide in April each year, the anniversary of creation of the Armenian alphabet, along with commemorations of important national battles and victories. The choir also performs on the anniversaries of renowned Armenian composers, among many other historically and culturally important dates. In total, over the past decade, Arax gave 35 music performances.

Born in Beirut, Lebanon, a graduate of the Komitas State Conservatory of Yerevan, Mihran Ghazelian has much experience of working with choirs in Egypt and Armenia, as well as internationally. In the early 2000s, he conducted the Sourp Sarkis Mother Church choir in Tehran, Iran. In Egypt, Ghazelian is not just responsible for Arax. He is also the choir master of the Nerses Shnorhali choir attached to the St. Gregory the Illuminator Church, the Dziadzan of the AGBU and Housaper Cultural Organisation’s Dzaghgasdan children’s choirs. Ghazelian edited a large number of Armenian songs arranged by Daniel Yerajishd, as well as selection of hymns and songs and of St. Vartan. The hymns and songs were published by the Mother See of the Holy Etchmiadzin.

The Arax performance took place under the auspices of Bishop Ashod Mnatsaganian, primate of the Armenian Apostolic Church in Egypt. Though amateurs, the singers handled many musically demanding compositions with notable ability. One only wished for a larger number of men in the choir, to balance the female voices dominating most of the songs. A few soloists are worth mentioning. Among them mezzo-soprano Kohar Ghazelian, who took on her shoulders a particularly challenging Ode to Joy, a composition which not only showcased the professionalism of the singer but also, through long piano solo passages, highlighted the skills of Haig Avakian on piano. Equally interesting and well performed was the solo by baritone Ara Keuhnelian: Bebo, the fisherman’s Song from 1935 movie Bebo, directed by Hamo Beknazarian. With Khachaturian’s music, Pepo was the first Armenian sound movie. Interesting dance inserts included short traditional Armenian dances, among them dances from Khachaturian’s ballet Gayane.

With Haig Avakian on piano and Rupen Terzibashian on dhol (a double-headed Armenian folk drum), the evening covered various aspects of Armenian culture, expressed through the music of Khachaturian. Such events testify to the Egyptian Armenians’ strong cultural awareness and perseverance to keep their cultural riches and carry them from generation to generation. According to estimates, today the Armenian minority in Egypt does not exceed 4,000 people living in Cairo and Alexandria. Most of them have Egyptian nationality yet not all of them have Armenian nationality. Nevertheless they are characterised by strong unity and a cherishing of Armenian tradition, culture and language, something that was particularly obvious in an event by Arax Choir.

The past decades were marked by many prominent figures from the Armenian community in Egypt. Nubar Pasha (1825-1899), the son of an Armenian merchant, was an Egyptian politician and the first Prime Minister of Egypt. A particularly strong impact by the Armenian community was in the arts scene. Georges Kazazian is a well-known composer and oud player; Anna Boghiguian is a painter living between Cairo, India and Europe; Chant Avedissian exhibits his work around the world, along with other famous painters such as Karnig Zulumian (Karzou), Ashod Zorian and Yetvart Yaghjian. Ohan (1913-2001) was the first manufacturer of cameras for cinema production.Alexander Saroukhan (1898 – 1977) was one of the most renowned cartoonists and caricaturists in the Arab World; Anoushka a singer and actress and Kohar Kasbarian (1924-2007) opera singer. Musicians Hagop Sandaldjian, (1931-1990) and Garbis Aprikian are also well known, but Nelly Artin Kalfayan is one among many star actresses and singers who also include Mimi Gamal, Lebleba (Nunia Kupelian), and Fayrouz (Perouz Artin) child actress in the 1950s and 1960s.