Gala Dinner in Honour of Baroness Cox and President Bako Sahakyan
;
On Thursady 9th of July, 2015, a lavish Gala Dinner was held in honour of the Baroness Cox of Queensbury and the President of the Nagorno Karabagh Republic (Artsakh), His Excellency Mr Bako Sahakian.

The Dinner was held at the prestigious Goldsmiths Hall in the City of London.  It was organised by the Armenian Embassy in London together with the Armenian Community Council of the United Kingdom.

President Sahakyan was in London to attend the Dinner and also to hold official meetings. He was accompanied by senior members of his Government.

Baroness Cox is a dedicated humanitarian and founder of the Humanitarian Aid Relief Trust (HART) and has had very close ties with Nagorno Karabagh having travelled there numerous times, taking relief goods and to provide humanitarian aid to the people of the Republic. 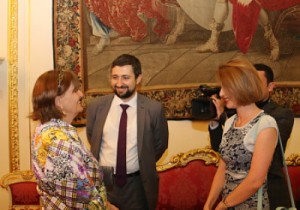 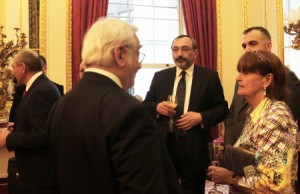 Guests included the Primate of the Armenian Churches in the United Kingdom and Ireland, Bishop Hovakim Manukyan and Bishop Bagrad Galstanyan representative of the Catholicosate of Holy Etchmiadzin.   Also present was eminent Statesman and Member of Parliament of the Republic of Armenia, Mr Levon Martirosyan who had travelled to London to present Baroness Cox with the highest State Honour that could be bestowed by the Government of Armenia.  Other guests included a large number of Baroness Cox’s extended family, some of whom had flown in for the occasion from as far away as Canada.  Amongst the almost 200 guests was Mr Jeffrey Robertson MP the eminent Human Rights lawyer and other distinguished British personalities, and prominent members of the British Armenian community. 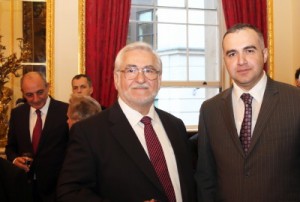 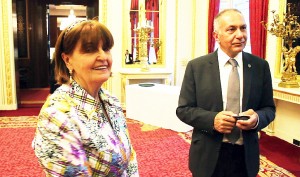 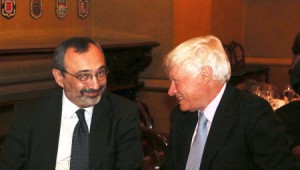 The evening commenced with a cocktail reception followed by a dinner, speeches and musical entertainment.  The Welcome Speech was made by Mr Raffi Sarkissian, member of the Armenian Community Council of the United Kingdom.  A message was read from the Armenian Ambassador, Dr Armen Sarkissian, and the Toast to the Guests of Honour was made by Mr Ara Palamoudian, Chairman of the Armenian Community Council of the U.K.   Mr Palamoudian said that the Gala Dinner was to honour two heroes of Artsakh; President Bako Sahakyan and Baroness Cox.   President Sahakyan had dedicated himself from a young age to the protection of the rights of the Artsakh people on the political and governmental levels, and Baroness Cox of Queensbury who has gained a most distinguished place in 20th Century Armenian History for her humanitarian work over the past more than 35 years for Armenians in general and for the people of Artsakh in particular. 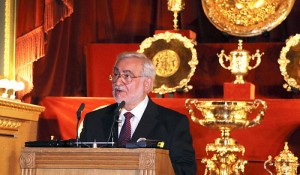 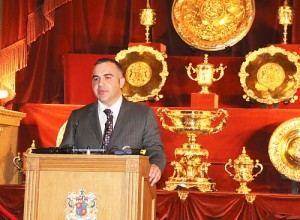 Responding, President Sahakyan thanked the Armenian Community Council and the Armenian Embassy for the manner in which he was welcomed and for the assistance extended to him by the Embassy during his visit.  He said that Artsakh is on very healthy grounds economically and continues to prosper, and he encouraged everyone to visit Artsakh.  He added that he was most encouraged with his various meetings in the United Kingdom and he hoped that in due course the political situation will be peacefully resolved. 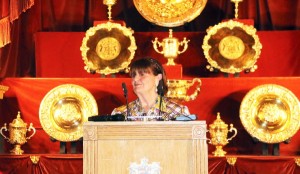 Baroness Cox said that she has had the privilege of being with the people of Karabagh man times, and had in fact travelled there 83 times, and had witnessed their courage, dignity, suffering and sacrifice during the dark years of their heroic fight for freedom.  She continued to say that man and nature  had inflicted much suffering upon the Armenian people; the Genocide of 1.5 Million Armenians (in 1915) resulting in the loss of Western Armenia, the horrendous earthquake of 1988 which took thousands of lives, and then the onslaught of Azerbaijan against the people of the historic Armenian land of Karabagh beginning with systematic deportations and then developing into full-scale war designed to achieve the ethnic cleansing of the Armenian people from their historic land of Karabagh. 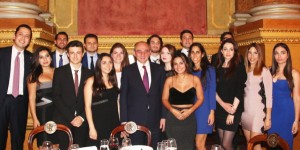 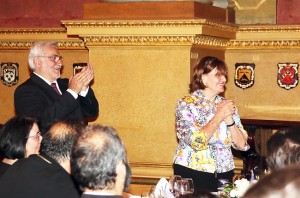 Baroness Cox recounted the times when she visited Karabagh during those awful times of war when she would count 400 GRAD missiles a day pounding in on Stepanakert, the capital of Karabagh, followed by aerial bombardments with 500 Kilogramme bombs.  She also spoke of the brutal massacres of civilians like the terrible events in Maraghar which she visited when the homes of the Armenian inhabitants were still burning and where she saw personally the raw evidence of massacre.

The humanitarian Baroness complimented the people of Karabagh for maintaining their dignity and for holding a frontline of resilience, faith and freedom which enshrine in so many ways the spirit of Armenians – a people who create beauty from the Ashes of Destruction.  She mentioned how much she was impressed when she went to Lachin immediately after the town had suffered immense bombardment and not a building had been left standing, she saw the people had immediately begun rebuilding; first the beautiful little church, then the hospital, followed by their homes.  She concluded by mentioning that the charity that she had founded, the Humanitarian Aid Relief Trust (HART) was actively working in Karabagh and amongst the many ventures in which they are involved, they support the Rehabilitation Centre which has become a place of hope and healing for people with disabilities, bringing hope to those who had no hope, healing to those who thought no healing was possible, and smiles to the faces of people who thought they would never smile again.

Baroness Cox was presented by the Armenian Community Council with an inscribed silver gift in appreciation of her humanitarian aid and dedication for the Armenian people of Karabagh.

Mr Raffi Sarkissian announced that the Evening had been sponsored by Mr & Mrs Vatche Manoukian and that the whole of the income from entrance donations, and additional donations collected from the attending members of the Armenia community would be donated for charitable purposes in Karabagh and a similar amount would be donated by the Armenian Community Council of the United Kingdom to the HART foundation established by Baroness Cox.

The evening was brought to a conclusion by beautiful performances by violinist Ani Batigian and soprano, Tereza Gevorkyan.

If unable to connect directly, select the link and press [CTRL]+[ENTER]  or simply ‘copy’ and ‘paste’ in your Browser Address Line

The Armenian Community Council of the U.K. would like to thank Mr & Mrs Vatche Manoukian for their most generous gesture by sponsoring the Gala Dinner, thus enabling donations to be used for charitable purposes.

The ACC UK would also like to thank the members of its Executive Committee, headed by Council Member Matilda Megerdichian, assisted by Liza Keoshkerian, Arshalouys Babayan, Zepur Kiledjian and all the other members of the committee, together with Council Member Mr Raffi Sarkissian, who who all worked extremely hard in a very short time to organise the function and to make it a resounding success.