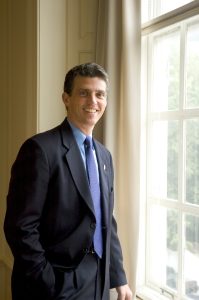 PROVIDENCE, R.I. (A.W.)—Former Rhode Island Attorney General Patrick C. Lynch arrives in Artsakh on July 18 to serve as an election monitor for the presidential election of the Nagorno Karabagh Republic (NKR), which will be held on July 19.

“I congratulate the government of NKR for their commitment to a transparent and fair election. I look forward to participating in this democratic process,” Lynch told the Armenian Weekly before his departure to Artsakh.

Although there are four registered candidates, the election is widely viewed as a race between President Bako Sahakian and Deputy Defense Minister Vitaly Balasanian.

Serving from 2003-11, Patrick C. Lynch is the 72nd person to hold the office of Rhode Island Attorney General since its inception in 1650. During his tenure as Rhode Island’s attorney general, Lynch was the first attorney general in state history to serve as the president of the National Association of Attorneys General (NAAG). A Special Assistant Attorney General from 1994-99, he prosecuted cases at every level of Rhode Island’s criminal justice system and led the state’s prosecution of gang-related offenses. Lynch worked for one of Rhode Island’s top law firms until the 2002 election, which capped his first campaign for public office.

Lynch had a strong voice in the shaping of legislation aimed at toughening the state’s criminal justice system, advancing the rights of victims, and affording additional protections to consumers. He made reducing juvenile crime the centerpiece of his administration, believing that the career criminals of tomorrow start off as the youth offenders of today.

During his tenure, Lynch, who as attorney general of Rhode Island had primary criminal authority, served from 2003-11 on the Board of the National District Attorneys Association (NDAA). He also served on the Executive Working Group on Prosecutorial Relations through the Department of Justice from 2004-06, and as chairman of the Democratic Attorneys General Association (DAGA) from 2004-06. During Lynch’s stewardship of DAGA, the number of democratic attorneys general surged to 31, and fundraising and membership soared.

It was while hosting the NAAG 2008 Summer Meeting in Rhode Island that Lynch was inducted as president of NAAG. He selected “The Year of the Child” as his presidential initiative, built on his work of furthering protections for youth, including increasing safeguards in the area of technology such as those attained by recent agreements with attorneys general and social networking sites, as well as the nation’s cable operators.

In response to an increase in the number of crimes committed against senior citizens in Rhode Island, which has one of the nation’s highest concentrations of elderly, Lynch established, in 2005, a specialized Elder Abuse Unit within the Department of Attorney General. The unit’s primary functions are investigating reports of alleged exploitation of seniors and prosecuting crimes involving elderly victims of abuse, neglect, and financial exploitation.

The father of two teenagers, Lynch’s greatest emphasis during his tenure was promoting the wellbeing of children. Whether it was healthcare legislation, safety on the internet, the dangers of alcohol and drugs, bullying, or the early onset of the scourge of domestic violence, Lynch has been a tireless advocate for children. As attorney general, Lynch visited at least one school a week—making hundreds of such visits since first taking office in January 2003—to speak to children about making good choices in their lives. He was also an unwavering advocate for the Rhode Island Judiciary’s anti-truancy and anti-drug initiatives, the Truancy and Drug Courts. In 2004, the New England Association of Drug Court Professionals presented him with its President’s Award for his “support of drug courts and their graduates.” A year later Lynch became a member of the Executive Board of the National Association of Drug Court Professionals.

Lynch’s energy and leadership on important legal and social issues has earned him the respect of his peers throughout the nation. Not only did Lynch lead several important amicus filings, he very actively participated and chaired or co-chaired many committees at NAAG including Youth Access to Alcohol and the Criminal Law Committee, and co-chaired (along with Colorado Attorney General John Suthers) the Task Force on School and Campus Safety in the wake of the murders at Virginia Tech.

Lynch took particular pride in fighting to protect the environment in his role as the Environmental Advocate and in the public utilities process in Rhode Island, the New England region and with his colleagues nationally. Environmental accomplishments include is leadership on local matters from individual rate cases for consumers, a first in the nation settlement with the Department of Navy for its spoliation of RI lands and water bodies. On a national front he was involved in prominent environmental matters before regulatory agencies and every level of our legal system including clean air court cases including coal emissions and car emissions cases against both industries and our Federal government (in the nation s first supreme court case on global warming).

Lynch aggressively took the lead defending his Ocean State’s economy and natural resources by leading the fight to defeat efforts to site an LNG facility in Providence and joined with anti-LNG forces in nearby Fall River, Massachusetts, where another facility had been proposed. Stating that safety and security measures are inadequate to protect the public, the infrastructure, and the environment, he continues to advocate for the sovereign rights of states against the unwanted introduction of LNG terminals.