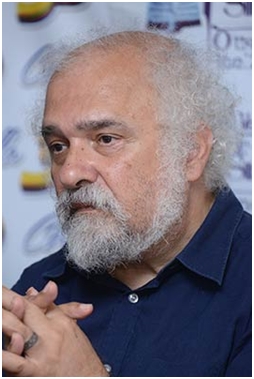 A Turkish version of “The Armenian Genocide in Ottoman Turkey. Testimonies of Survivors”, a three-volume collection of archival documents covering the 1916-1917 period, has been published in one volume, in 1500 copies in Turkey by intellectual, human rights champion Rageb Zarakolu. The publication contains a large amount of research material of historical, political and legal significance.

“This book is the result of efficient work that was done in the immediate aftermath of the Genocide. It contains evidence gathered immediately and raises numerous questions. This book is the second most important one after “The Blue Book”, as it also includes testimonies related to 1916,” says Zarakolu, noting that the Turkish version will be presented to the entire world.

Speaking about Turkey’s denial of the historical events, Zarakolu explains the essence of this denial. “When they falsify something, it becomes continuous, they have to falsify everything, invent new ‘evidence’, erase Armenian names from wherever it is possible. All this reminds me of George Orwell’s novel “1984” that tells about professionals whose job is to destroy documents and create new ones consistent with the new situation.”

Zarakolu began his campaign for the truth together with his late wife still in the 1990s. He campaigned for the truth about the 1915 Armenian genocide by presenting the reality of the events.

“When we began our work, we were alone in the Turkish society, our cause was not accepted even by the more educated public. We published the first book in 1993, only two elderly Armenians had the courage to enter our door. Our book was immediately banned. After that we managed to publish it again illegally. The third Armenian who inquired about it was Hrant Dink from Constantinople. He undertook to disseminate 1,000 copies, of course, not legally,” the Turkish publisher remembers.

Zarakolu thinks his job is to fight for honor.

“If I don’t continue this fight, it will mean I am giving up the struggle of conscience that my wife started. We have faced pressures in Turkey still during our childhood. If a genocidal state goes unpunished, it will start pressures over again against different ethnic or political groups. I was arrested by the army in 1971. In the cell next to mine was my Armenian friend, Masis. Both of us were tortured, they hit us in the feet. But since he was an Armenian, they tortured him twice as hard. It was perhaps then that for the first time a question arose in my mind – why do they subject Armenians to torture harder than ours?” the scholar remembers.

According to Van NGO Honorary President Rouben Galchian, in 2012 they published the three-volume collection “The Armenian Genocide in Ottoman Turkey. Testimonies of Survivors” that included as many as 602 eyewitness accounts by Genocide survivors from the provinces of Van, Bitlis, Erzurum, Kharberd, Diyarbakir, Trabzon as well as Parskahayk. Galchian said that those are very important documents that can serve as evidence of international value.

Zarakolu said that Turkey knows all too well what implications the admission of the Armenian Genocide and the restoration of historical justice will have for his country, it knows that admission will have to be followed by other stages, and that’s why Turkey wants to keep the issue where it is now.

“But it is not only Turkey, but also large states that have responsibility here. The case against insurance companies in the United States was neutralized, and the reason was that the U.S. does not officially recognize the Genocide. All governors, leaders, including Obama, Pelosi speak about the Genocide, accept it, but when it becomes a concrete issue, when it starts concerning the State, everyone forgets about it,” said Zarakolu.

Van NGO gathered from the Armenian archives accounts of genocide survivors related to the period of 1916-17. They were included in Armenia’s National Archives.

The book’s Russian, Spanish and French translations are also expected in the near future.