David Lidington: `The current state of British-Armenian relations is good, but it needs to be developed further’

David Lidington visited Yerevan this week and held meetings with the Armenian leadership. He summed up his visit in an interview with Mediamax correspondent Aram Araratyan.

AA. Before your trip to Armenia, you mentioned in your Twitter that this is the first UK ministerial visit to our country over the last 6 years. It’s a long time, don’t you think so?

DL. To be honest with you, it’s too long time and I am glad to be here. There are two main objectives. First of all, I see it as a public demonstration of the fact that the United Kingdom sees Armenia as a friendly partner, as a country that’s moving closely to NATO and the European Union.

Armenia has contributed to the peacekeeping efforts in Afghanistan. Armenia has carried through and is continuing to take through economic and democratic reforms to make Armenia come closer to the European standards. I hope Armenia is going to conclude the Association Agreement with EU and push forward the talks on a Deep and Comprehensive Free Trade Area Agreement. All of it is welcomed.

Secondly, it’s important in the context of bilateral relations. I met some leaders of British and Armenian businesses and talked with them about what more we need to do to encourage greater trade between our countries and also greater investments in both directions. This is a part of a national drive. Our Prime Minister David Cameron encourages British companies to look for markets in emerging economies around the world like Armenia and also encourage companies elsewhere in the world to see the UK as a good partner that is open for business and welcomes good investment. Besides, I would like to strengthen bilateral political links with Armenia. 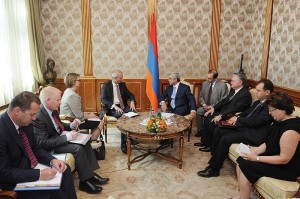 AA. This year we celebrate the 20th anniversary of establishment of Armenian-British relations. What has been done over this time and how do you assess the current state of relations?

DL- The current state of bilateral relations is good and friendly, but it needs to be developed further. I particularly see opportunities in terms of commercial relationship. Armenia wants to further modernize its economy. I can see mutually beneficial opportunities there, for example, in something like mining. British companies are keen to get permission to operate in Armenia to provide jobs and new tax revenues for Armenia.

We are looking for financial services, where London, as a European global financial services centre, has the experience of private and public partnerships to make investment capital from the private sector into supporting big infrastructures or other public work projects, which may be interesting for Armenia.

In terms of what happens this year, I would like to mention that this year we celebrate not only the 20th anniversary of establishment of Armenian-British relations, but also the 10th anniversary of the British Council operating in Armenia. We hit a record by the number of Armenian students coming to study in the United Kingdom, where they learn English as a language to understand more about British culture. That’s something we welcome. And of course, I would like to mention the fact that Armenian President Sargsyan attended the Olympic Games in London.

AA- Let’s continue the theme of economic cooperation. In your opinion, what are the main challenges and opportunities here?

DL- I think that opportunities are very encouraging. Even today walking in the center of Yerevan, you can see British brand names, other British retails looking to come to the Armenian market as well.

My message for Armenia would be to carry on with the task of economic modernization. When I talked to British companies anywhere around the world, particularly in Europe, about how they made their investment decisions, their answer is next: is there transparent tax code or is there regulatory business system friendly? Can we be confident that licenses and permits will be fairly resolved? Armenia has made a huge progress, I recognize this. But Armenian leaders themselves acknowledge that many things still must be done. In this context, I think Armenia should make itself even more attractive to international investment and very competitive market.

AA- How would you assess the work of Armenian and British Embassies in London and Yerevan respectively?

DL- I think that both embassies are working extremely hard. I know that our ambassadors here are keen to strengthen bilateral relations. They report thoroughly about the developments in Armenian politics and society. The Armenian Embassy in London is full of energy. The Armenian Ambassador came to see me last week ahead of my visit here to brief me on some things that may be coming up. I think we have got Embassies that are really committed to make a success of the relationship.

AA- There is an opinion in some Armenian political circles that Great Britain does not have any special interests in Armenia especially if we draw parallels with Azerbaijan. How justified is this opinion and do you see opportunities for deepening Armenian-British relations?

DL- We have friendly relations with both Armenia and Azerbaijan. What is true is that we have very substantial British commercial interests in Azerbaijan as a result of British Petroleum investment in Caspian Sea’s oil and gas sectors.

But my argument is that the fact of the UK economic interest means that we have much greater interest in supporting the Minsk Group Co-Chairs in trying to achieve a peaceful negotiating outcome to the conflict over Nagorno-Karabakh. The South Caucasus is not some corner of a page in the atlas, it’s something the matters in terms of British economic interests, which could be at risk if there is renewed violence. That’s why it’s our interest that there will be peace and stability. And that’s what we want to see.

AA- You have stated many times that peace and stability in Caucasus are an important objective for the government of Great Britain. In this context, how do you assess Azerbaijani authorities’ actions, which pardoned and glorified the murderer of the Armenian soldier? Don’t you think that this step has abruptly aggravated the situation in the South Caucasus which is already unstable to the highest degree?

DL- We don’t want to see anything that can add tension and distract from the peace and reconciliation process. We welcomed and supported the statements that have been made by the Council of Europe, EU, OSCE Minsk Group Co-Chairs on the subject. I think that it is important that nothing is done that glorifies murderer. Given what has happened, my view is that we need to look for with increased urgency for ways to try to get the Minsk group process going again, because that is the only vehicle we got at the moment to try to make restore reconciliation.

From our own experience in Northern Ireland, we understand how difficult this is. And we are talking not just about political leaders, but about real families of both sides, who suffered as result of the conflict. This takes a long time to heal and to achieve reconciliation and final outcome, based on the compromises of both sides. But that is what we wish to see and that’s why we support this process.

AA- How do you assess the actions of the EU member state, Hungary, which concluded a deal with the Azerbaijani authorities?

AA- In January 2012, commenting on your country’s stance on Nagorno-Karabakh, you stated the necessity of interaction between the civil societies of Armenia, Azerbaijan and Nagorno-Karabakh noting that the government of Great Britain will fund the special project of £1.06 million through Conflict Pool. Can you speak in detail what kind of project it is?

DL- What we are trying to do through that limited program is to make possible people-to-people contacts. I think one of the real challenges over Nagorno-Karabakh is that they not only have top level political relations being so bad, but there have been almost no contacts between ordinary people, different societies. I think that’s true for Armenia and Azerbaijan, two neighboring countries and even more for people living in Nagorno-Karabakh itself. Encouraging people-to-people contacts is not going to put everything right. But it is one step, which we can take without trying to get away of the Minsk Group Co-Chairs, who have the leadership role in the political process. It derives in part from our experience in Northern Ireland, where were lower level of civil society contacts, that helped to bring about conditions under which political reconciliation could take place.

You can never apply experience in one part of the world exactly to the different part of the world. But you can find out and use some lessons, which can be picked up in different circumstances and something similar might be helpful too.

DL- We accept that what happened in 1915 was a huge tragedy. Very large number of people experienced an enormous suffering. I don’t want to downplay that fact, but I think it is for Armenia and Turkey to work out a way to come to terms to that shared history rather than for us to come in and affix a particularly labels to that experience.

AA- Last year, we had a conversation on that topic with Israeli ambassador to Armenia and he said that it’s necessary to discuss this issue in the terms of `realpolitik’. Do you agree with such a point of view?

DL- Since I have been a minister, I’ve been called to recognize a number of different historical events as Genocide. We have taken a view that this are historical scars, the healing of which will not be helped by us, adopting that particularly label. As I said in the case of 1915, I did not minimize the tragedy and suffering of Armenians, but it is for Armenia and Turkey to work how to deal and how to face up on what happened.

You know if I look an Anglo-Irish history there are a lot of different episodes, where one side or another can point a finger and say look this was an event, which took a lot of human lives. But actually, the scholars continue to debate over this or that episode of our common history. What counted in the end is that modern governments and modern societies work on how to acknowledge each other’s narratives of the shared history, good and evil pages and the most important – to agree on a new start toward a peaceful way forward.

AA- British Airways decided to stop direct London-Yerevan flights performed by BMI. Don’t you think that this decision can send a wrong message to Armenia?

DL- It’s a pity decision, but it’s a commercial one. British Airways is not owned by the British government, it’s an independent private sector company. That takes a business decision. I think that’s a challenge, for Armenia is going to see how to attract other local carriers to come into the market to serve Armenia directly.