Commemorative Evening of the Armenian Genocide in St. Yegishe Armenian Church in London

A day that unites Armenians across the world regardless of political, social or cultural background, to remember 1.5million innocent lives lost in the first Genocide of the XX century.

The 24th of April 2014 once again united Armenian community of London; children, parents and grandparents, gathered in their hundreds for a very special evening of poetry, music and readings from honorary members of the Armenian community. 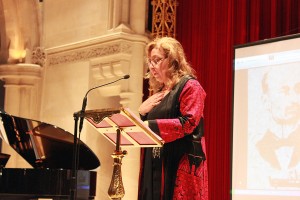 The host of the evening, Mrs. Nouritza Matossian told her family’s horrors and survival through the Genocide, followed by speech from Mr. Ara Palamoudian, the Chairman of Armenian Community Council of UK. In the absence of the Ambassador of the Republic of Armenia in London, the First Secretary of the Armenian Embassy, Mr. Ara Margarian read out his message for the Commemoration of Aril 24th. 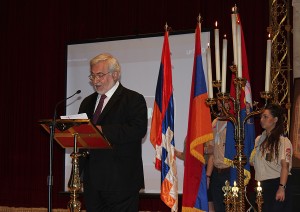 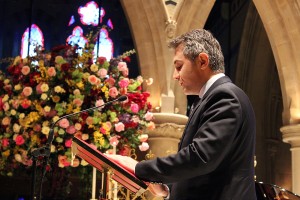 The musical programme included performances from talented young musicians, post-graduate students from Royal Academy of Music. British Armenian violinist Rebecca Greenstreet’s sober and controlled interpretation of J.S Bach’s second Partita in D minor was highly enjoyable and perfectly suitable for the occasion. Young composer Arpine Kalinina performed her tasteful  and contemporary piano arrangements of 4 songs from the great Armenian composer Komitas. Her fellow student from the Royal Academy of Music, young and talented soprano Kirsty M. Anderson interpreted 2 songs by Komitas, including the legendary Krounk. The audience welcomed warmly the young English singer, who made every effort to perform the purity and the emotion of the music and interpret the beauty of the Armenian language. 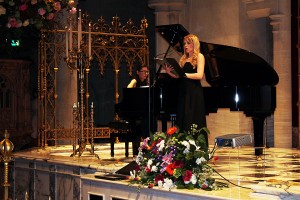 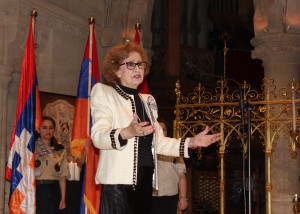 One of the highlights of the evening was the poetry reading by renowned Armenian actress, Mrs. Jenia Nersissian,  a poem in Western Armenian by great poet Siamanto, one of many writers killed by the orders of the Turkish Government in 1915. Her second reading of Paruir Sevak “Genocide Bells” was truly remarkable.

It was very refreshing to see so many young and gifted Armenian pupils between ages 6-18 representing Armenian Community Saturday and Sunday Schools in London. The children recited poems by Varoujan, Toumanian, Kaputikian, Emin, Manvel Adamian and many others with great passion. 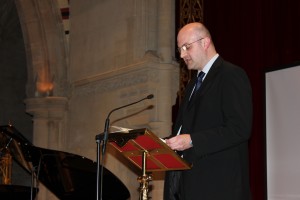 The musical section was followed by a message from Dr. Garen  Arevian who presented the work undertaken by AGCCC (Armenian Genocide Centenary Commemoration Committee) for the commemoration of the 100th anniversary of the Armenian Genocide next year.  Dr.  Arevian mentioned that the members of AGCCC were working on several fronts including political, cultural, press and media in order to raise the awareness in the UK about the Armenian Genocide and for the recognition of the Genocide by the UK Government. Dr. Arevian emphasized that all Armenian organisations are encouraged to participate in AGCCC, and asked the community members to support and participate in this hugely important campaign in any possible way. 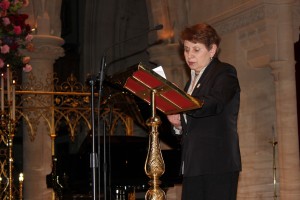 Armenian journalist and editor Mrs. Seda Ananian shared her memories of the eye witnesses and contemporaries of the Great composer Komitas, himself the sad eye witness of the Turkish atrocities of 1915. Mrs. Ananian told vividly about her neighbour in Yerevan and the personal doctor of Komitas, Dr. Haik Yazmadjian, who looked after Komitas in Paris hospital for many years and after his death, accompanied his body for the funeral in Armenia in 1936. It was followed by recital of a powerful poem of great poet Kostan Zarian, with whom Mrs. Ananian collaborated in the 1960s. The poem was recited brilliantly and forcefully by one of the distinguished Armenian actors, “the Voice” V.Abadjian via recording. 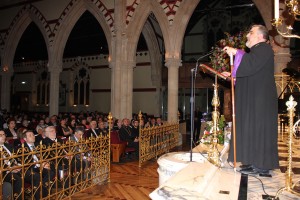 An emotional closing message and Blessing was delivered by His Grace Bishop Vahan Hovanessian, Primate of Armenian Churches in the UK. His Grace mentioned that 99 years ago, when the Turkish government declared their mission to leave only one Armenian alive as a museum specimen, back then  no one could predict that 99 years later, there would not be Ottoman Empire. Instead, 99 year later, Armenians have a free, independent state and a thriving Diaspora all over the world united around their Church, their language and their cultural identity. His Grace not only reminded the audience about the significance of the 24th of April for the Armenian people, but once again called all Armenian parties, political and cultural organisations to reunite and to act as one.

In a world so fractured and divided, it is vital for Armenians to join their peaceful and creative forces together and to fight for the same cause: the recognition of the Armenian Genocide.  By participating in such a united effort, we will be honouring the memory of our great Siamanto, Varoujan, Komitas, Zohrap and each and every one of those 1.5 million innocent victims of 1915.