Armenian Community Council of the United Kingdom
On the 23rd of April, 2015, as part of the numerous events taking place in the U.K. to commemorate the Centenary of the Armenian Genocide, the London Armenian community gathered at the Commemorative Apricot Tree at Ealing Green in London.  The tree was planted on land provided by the Ealing Borough Council, as a symbolic monument for the Victims of the Armenian Genocide.   At the gathering, prayers were said by the Armenian Church clergy and speeches were said, including one by Saturday School student, Mary Ovakimian.

Mary had prepared her speech as a piece of homework at the Armenian Saturday school. She also gave a presentation at her school – Waldegrave in Twickenham. 14 other English students, who were prepared by Mary, went in pairs to classrooms to introduce her presentation and raise awareness about the Armenian genocide. Around 300 students and their teachers were informed when they went around to the classes, and as a result, the school decided to create their own campaign; making the forget-me-not flowers and creating a bouquet to show to the rest of the school. It is a poignant article written by a young Armenian, and reads as follows: 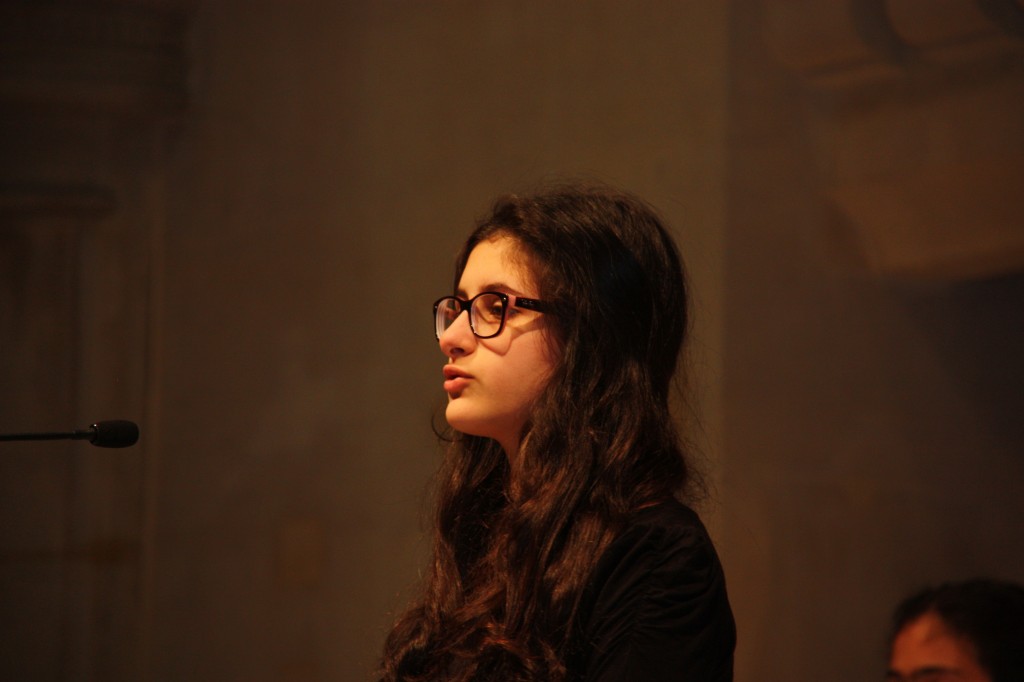 ”  Good evening. I am an Armenian Saturday school pupil and I have been asked to talk to you today about the Armenian genocide. To be honest with you, there is a little too much to talk about. I even myself found it hard to start. There are so many facts and figures which would astound and amaze you. There is so much detail to every moment of this bloodcurdling event that those who witnessed it could keep talking for days.

There are the facts. Then there are the different criticising and one-sided opinions. Then there are stories; news articles, news reports and blogs. There are posts, marches and memorials going on around the world right now…trying to get your attention. They represent and extend the clear message of the Armenian people to the world- “recognise our genocide”.

When I’ve talked about the Armenian genocide to everyone at my school, the question I get asked the most is; why? Why are you raising awareness? What is it that you want? And I reply with my own question: are you asking what the world thinks the Armenian nation wants, or what I truly want? They shrug and say either. So I tell them.

I tell them that my country demands the land taken from us, the compensation deserved and most importantly the legalised recognising of the Armenian genocide. For a whole century now Armenians around the globe as well as the entire progressive international community expects Turkey to demonstrate the courage and face its own history by recognising the Armenian genocide, thus relieving next generations of this heavy burden of the past.

I say that we have been fighting for this cause so much- to get it recognised as an important part of history, which those around us forget. It is not just a part of history- it is the part of the present and of the future. The effects of the genocide have not worn off, and they hardly will. The genocide itself has not been forgotten and it never will. Not by me. Not by my family and not by the world.

I don’t care for money the Turkish government owes us. I don’t care for world pity or help. I care for the justice of all the people who were brutally killed, shot and forced out of their homes. I care for the families of the 1.5 million people around the world, scared one way or another by the loss of a loved one. And I certainly care that after all this loss and grief that the world does not recognise.

Those who say the genocide was fake are bombarded with picture, stories and news articles that prove them wrong. Those who still argue that it was not a genocide can look up the word in whichever dictionary in whichever library they want, and will be greeted with this one sentence; “the deliberate killing of a large group of people, especially those of a particular nation or ethnic group.” Are 1.5 million people too little for you? Are the Armenian people not a race? Then why? Why has the Armenian genocide not been recognised? Why are people debating about it? Why are people trying to prove it? Why are people trying to disprove it? There is nothing to be said, stated or written down in history but this

“The Armenian genocide occurred in 1915, when 1.5 million Armenians were killed by the Ottoman Empire.”

And we say to the world:

“I remember and I demand”

And we shall keep demanding- for our country, for our people and most importantly, for those 1.5 million worth remembering.