A Choir Is Born In London

St. Yeghiche Armenian Church in London vibrated with a memorable classical concert on the 18 October 2014. Tekeyan Trust of London organised an autumnal concert of Armenian music with participation of Komitas Choir under the baton of the young promising conductor and Artistic Director Sipan Hagopyan as well as other talented young performers in the UK: violinist Ani Batikyan, international award-winning soprano Tereza Gevorgyan and twenty-year-old pianist and composer Kristina Arakelyan to celebrate 145th Birthday Anniversary of the great composer Komitas.

The audience contemplated recitals by young Armenian artists, who introduced several masterpieces of Komitas Vardabet. Armenian composer Komitas not only re-invented the tradition of Armenian folk music by getting rid of foreign influences, but without Komitas Vardabet, many of those 4000 ancient folk songs would have vanished forever.

The first to perform was multi-talented Kristina Arakelyan, a third-year scholar of Royal Academy of Music in London, already a well-known name to classical music lovers. Kristina performed two Dances for Piano by Komitas with youthful vigour and vigorous confidence. In the first half of the concert, Kristina also accompanied soloists with huge professionalism. 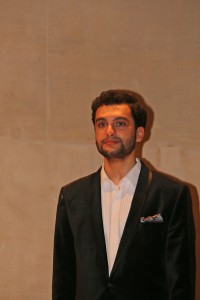 In the first part of the programme Sipan Hagopyan sang two well-known songs by Komitas with his warm, velvety tenor, accompanied by Kristina Arakelyan on the piano. As a child Sipan attended Tchaikovsky Music School for gifted young musicians and later graduated from Yerevan State Conservatory with Masters Degree. Sipan continues his vocal training in London where ha takes master classes with Professor Philip Dogan at RAM. Sipan has performed on Armenian and British stages throughout the past four years, and from concert to concert, Sipan’s natural talent is growing stronger and more compelling. 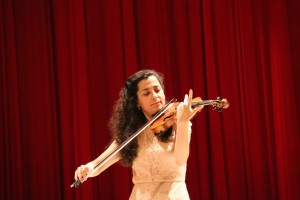 Violinist Ani Batikian is an accomplished soloist, and graduate from RAM with the top prize for violin. For this evening, she had selected two masterpieces of Komitas, which she interpreted both with verve, precision and admirable intonation. The opening low notes from famous “Krounk” sounded mesmerizing, followed by an effortless shift to higher octaves, performed flawlessly, while she set high standard for the rest of this very challenging violin piece. The young violinist showed a restrained lyricism throughout the second piece Kele Tsoler.

Another revelation of the evening was the young soprano Teresa Gevorgyan, who performed two celebrated songs by Komitas, “Apricot Tree” and “Swallow”. Teresa’s delightful voice was unpredictably powerful for her very slender and elegant physique, yet it filled the entire auditorium with the breathtaking sounds of those lyrical jewels. One of the most memorable recitals of the evening was her version of “Swallow” by Komitas, which was emotional, sensual and rich in musical texture and nuance. 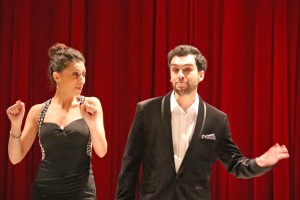 One of my favourite recitals of the evening was the duet called “Habrban” interpreted by Sipan Hagopyan and Teresa Gevorgyan, accompanied by Ani Batikyan on violin and Kristina Arakelyan on piano. Cheeky, joyful and youthful, this piece was quite suitable for the young artists and there was a lot of creative chemistry among those four musicians who had joined together in this uplifting and positive piece, which made one’s heart thump with pride. 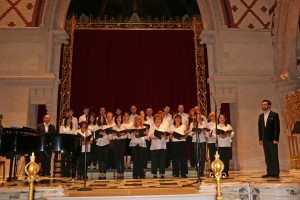 In the second part of the concert Komitas Choir performed nine songs, prepared for their first public concert in London. The choir has been formed just a year ago, and was initiated by Mr. Ouzounian and Sipan Hagopyan. For an entire year, the Artistic Director and Conductor of Komitas Choir Sipan Hagopyan and wonderful Concert Master Ella Babayan, have been working relentlessly and passionately to prepare these amateur singers for their first public recital. Currently the choir consists of more than 30 singers, among them the soprano Arpineh Kassabian, who interpreted “Blossomed Cherry Tree” by Alexandr Achemyan with artistry and liveliness. The Choir presented three illustrious Komitas songs, “Rain Fallen”, “My Pretty Lover” and “This Night, Moonlight Night”. Other popular songs and classics were included, such as “Arpa-Sevan”, “Kilikia” and “Yerevan’s Blow Night”, but “My Sweet Armenia” music by Ashot Satyan, based on the poem of Yeghiche Charentz was interpreted with particular emotion. 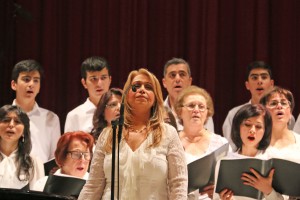 This first public concert has been an encouraging start for Komitas Choir and the Artistic Director. It was gratifying to spot three young faces amongst this dedicated group of volunteers, yet it would be wonderful to see more young members of the Armenian Community joining Komitas Choir, in order to continue the excellent choral traditions set by Komitas himself and to spread the ancient Armenian musical and cultural heritage in the UK.

At the end of the evening an emotional speech was given by Very Revd. Father Aren Shaheenian, who welcomed the audience to St. Yeghiche Church, and used a metaphor from the song “Krounk” to symbolise Armenian nation’s survival and praised the brilliant initiative to form the first Choir in the UK. Mr. Ara Margarian from the Armenian Embassy in London congratulated Komitas Choir and wished future success. In his closing speech Mr. Ouzounian expressed his gratitude to benefactors for supporting Komitas Choir, and thanked dignitaries and the audience for their attendance to this significant Autumn Recital at St. Yeghiche Armenian Church in Kensington.