British Museum: We are very aware that Ancient Turkey is nonsensical from a historical point of view

The British Museum has responded to the letter of the Forum of Armenian Associations of Europe (FAAE), where the forum protests against the use of Ancient Turkey name for the museum’s room 54 and suggests renaming the room into Urartu, Ancient Armenia.

In its response to FAAE, the Museum’s keeper Jonathan N. Tubb says: “The name of this room was determined within a wider re- signage project designed to encompass the whole museum. The design team aimed to make the Museum’s signage as simple and accessible as possible and avoid terms that would not be immediately apparent to non-English speakers; as many of our visitors come here from abroad. Room 54 did cause some problems as there was a strong feeling among non-curatorial staff that its previous name (Ancient Anatolia) did not immediately convey what was in the room. Our curators however, are very aware that Ancient Turkey is nonsensical from a historical point of view and so the naming of this room was the subject of much debate, and continues as such. 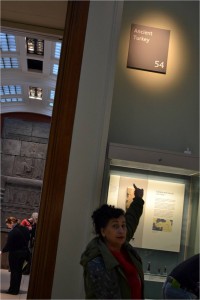 Your suggestion that the entire room be re-named Urartu, Ancient Armenia’s problematic as the objects within room 54 cover a very wide range of time periods and cultures from the Neolithic to the Iron Age. Only thirty-five per cent of the total display consists of Urartian artifacts, and therefore your suggestion would also be a misrepresentation of the total contents of the room. The strongest link between the objects displayed in room 54 is their geographical association with the area of the modern Republic of Turkey. Of the total of 142 objects in the gallery, 113 were found in locations within the boundaries of modern Turkey. Fifteen objects were found in Iraq but originated within the boundaries of modern Turkey. One Urartian artifact is from a location within the modern Republic of  Armenia and five are from modern Iran; all are clearly labeled as such. Eight objects from the Urartian collection shown in case 6 do not have a certain provenance but, being Urartian, have as much likelihood of coming from the geographical area of modern Iran or Turkey as from modern Armenia.

Your concern appears to be primarily the concealment of Armenian culture through the use of modern geographical terminology. You cited the example of Armenian carpets being displayed as Turkish art and state that the Urartian display is part of this phenomenon. As I said earlier, the use of current geographical terms by the British Museum is designed solely for clarity.

When borders or country titles change we will change accordingly. The use of the title’ Ancient’ before the word Turkey is key in conveying to our visitors that the objects they see are not cultural Turkish. In writing the labels for the galley we have used the following period/culture terms in order to emphasize the range of
cultures represented within the space: Chalcolithic, Early Bronze Age, Middle Bronze Age, Greek-6th century BC, Halaf, Hittite, Iron Age, Neo-Assyrian, Neo-Hittite, Old Assyrian, Old Hittite, Phrygian, Carian, Lydian, Post Old Assyrian colony and Urartian.

I would stress that we do not claim these ancient cultures are in any way Turkish and would also suggest they are not Armenian either. Even though the Urartian artifacts, do have a strong link to the geographical region of Ancient Armenia they pre-date the rule of Armenian kings (the Orontid dynasty) in that area; an aspect that is discussed on the information panel next to the Urartian display case.

The issue of a title for room 54 is very complex and we are glad to receive your comments on this subject. I hope this letter can assure you that the current title was not decided upon lightly and continues to be a subject of discussion. We do understand that the term’ Ancient Turkey’ is nonsensical and also that Armenian identity is important. The problem remains however that our visitors use modern geographical references to decide which parts of the collection they wish to see and the labels used need to reflect this in the most simplest and accessible way possible. We are currently considering the on-going issues associated with this gallery, which includes its title if as a result of these discussions there is any change to the name we will inform you of this as a matter of priority.

I should like to point out also that we have a very good and close relationship with our Armenian colleagues. We recently had the pleasure of meeting the Armenian Minister of Culture and Armenian Ambassador to London here at the British Museum to discuss potential collaborative projects including possible exhibitions here on ancient Armenia.”