International criticism and concern has been growing following the release of a convicted murderer after his transfer from Hungary to Azerbaijan. 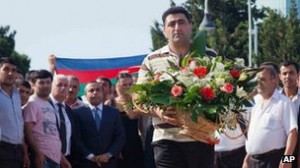 Ramil Safarov was greeted as a national hero in Baku

Russia condemned Azerbaijan’s decision to pardon Ramil Safarov, who hacked an Armenian to death in Hungary in 2004.

Other groups called for calm and said the incident should not derail peace talks between Armenia and Azerbaijan.

However, Armenia’s president said his country would be ready if war were to break out between the two.

President Serzh Sarkisian said, in quotes carried by the AFP news agency: “We don’t want a war, but if we have to, we will fight and win. We are not afraid of killers, even if they enjoy the protection of the head of state.”

At the weekend hundreds of Armenians protested outside Hungary’s consulate in the capital Yerevan, burning Hungarian flags and pelted the mission with eggs.

Ramil Safarov was given a hero’s welcome on his return to Azerbaijan last week. As well as an official pardon from President Ilham Aliyev, he was promoted to the rank of major, given a flat and all the pay he had lost since his arrest eight years ago.

Russia, which has been involved in efforts to defuse the so-called frozen conflict between Armenia and Azerbaijan, said: “We believe that these actions of Azerbaijani as well as Hungarian authorities contradict internationally brokered efforts, of the OSCE’s Minsk group in particular, to ease tensions in the region.”

The co-chairs of the Minsk group expressed their “deep concern and regret for the damage the pardon and any attempts to glorify the crime have done to the peace process and trust between the sides”.

Safarov killed Armenian soldier Gurgen Markarian at a military academy in Budapest in 2004, where both servicemen attended English-language courses organised by Nato.

During his trial in Hungary, Safarov said that the Azeri-Armenian war over Nagorno-Karabakh in the 1990s, and insults from the Armenian officer were at the root of his actions.

The Hungarian authorities said they had returned Safarov to his homeland only after receiving assurances from the Baku government that his sentence would be enforced.

Hungarian Prime Minister Viktor Orban on Monday said his country acted within international law, and denied there was any secret deal with Baku.

Reuters had reported a week earlier that talks had been held over a loan from Azerbaijan to Hungary of 2-3 billion euros.

Azerbaijan and Armenia, both former Soviet republics, fought over the enclave of Nagorno-Karabakh in the early 1990s. The conflict left some 30,000 people dead and displaced hundreds of thousands.

Armenia-backed authorities currently control the region, which lies within Azerbaijan.

Despite a 1994 ceasefire, skirmishes continue on the borders of the disputed territory.