::  The London Armenian Opera (LAO) achieved what might have been thought to be “unachievable” by producing Tigranian’s opulent masterpiece “Davit Bek” which was performed on the 18th and 19th December 2015 in the Benjamin Britten Concert Hall of the Royal College of Music in London to full houses.  The full-length Armenian opera was produced in London with a small budget, an amateur choir, professional soloists, conductor and a full orchestra, and the whole Company must be congratulated for their phenomenal success.

Davit Bek has been so far the biggest project undertaken by LAO, and was chosen specifically for the commemoration of the centenary of the Armenian Genocide. David Stephan, the Chairman of LAO, confessed that it had been a massive collective effort from many volunteers and professionals to produce the opera: “LAO ensemble had to work tirelessly and devotedly during 90 rehearsals over 16 months under the inspirational directorship of Aris Nadirian, Seta White and conductor Levon Parikian”. 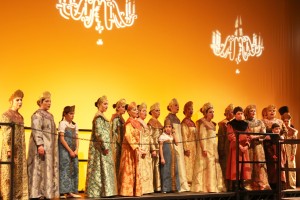 Armen Tigranian’s opera David Bek was the second and the last opera of the composer – classical in its structure yet full of Armenian folk tunes and melodies. It opened in Yerevan State Opera in 1950, just months after composer’s death. The opera was commissioned to Tigranian during the World War II, and had to demonstrate ultimate optimistic spirit. The objective was surely to boost the morale of the Armenian nation, fighting alongside Russians and other nationalities against Nazi Germany. Henceforth, it had to have a happy ending, and the composer used for his libretto Raffi’s epic novel Davit Bek, based on the Armenian resistance movement against Persian invasions in the 18th century.

“This project would not have been possible without the contribution from many Armenian organisations and individuals”, confessed Ruzanna Gasparian, member of LAO, “We have received a large number of donations, and have used the facilities provided by various organisations such as Navasartian, Hayashen and Hay Tun. We are extremely grateful to all our donors, without whom none of LAO’s performances would have been possible”. 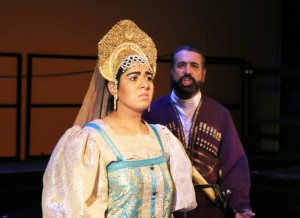 Aris Nadirian’s ambitious project became reality thanks to professionals from UK and Armenia and enthusiastic volunteers among the Armenian community in London. Aris Nadirian, the founder of LAO is a professional singer, conductor and Chorus Master of St. Yegishe Armenian Church. He also interpreted the role of Davit Bek – the Armenian nobleman and military leader of the 18th century, who assembled and led the Armenians troops to victory against the Persian army in Eastern Armenia.

The live orchestra of Davit Bek was led by London-based conductor Levon Parikian, who performed Tigranian’s masterpiece with some cuts, yet kept the integrity and the accuracy of the stage story. LAO choir was undoubtedly one of reasons of the success of Davit Bek in London: with approximately 20 benevolent and dedicated singers from the Armenian community, who sang in four-part harmony. 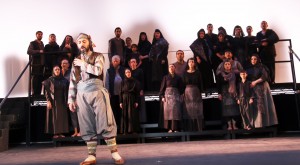 “The soloists from Armenia were selected by our artistic director Aris Nadirian with the help of soloist Vahe Begoyan also from Armenia, who had performed with us in our previous productions”, explained Ruzanna. “While in Armenia, they were trained and prepared for this project by Aren Avetyan. Then the soloists joined us in London for the last few weeks of rehearsals. Their participation made this project a very successful example of Armenia-Diaspora collaboration”.

Seta White, London-based professional actor and director, had achieved utmost dramatic effect with uncluttered décor and simple settings. It was particularly moving to watch the sombre scenes of mass killings of civilians, children and unarmed men at the end of act one, which reminded the audience of the atrocities during the Armenian Genocide of 1915. Seta had collaborated in previous productions of LAO: Tigranian’s Anoush and Tchoukhajian’s Garineh operas. Seta White’s theatrical and artistic career is closely linked with several successful Anglo-Armenian collaborative projects; the most notable venture was Armania at Shakespeare’s Globe in April 2014. 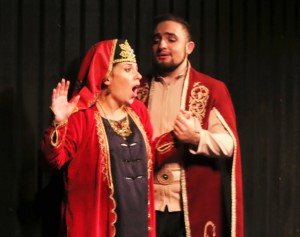 Award-winning Armenian soprano Tereza Gevorkyan from Britain and promising tenor Tigran Ohanyan from Armenia, interpreted the roles of two lovers, beautiful Shushan and her prince Stepanos Shahumyanwith great lyricism. Another memorable performance came from Anais Heghoyan in the role of Tamar, gifted opera singer from Britain, who is well-known to the Armenian community with her Armenian and European repertory. Grigor Abrahamyan, soloist from Yerevan State Opera, gave equally rewarding performance in the role of Melik. 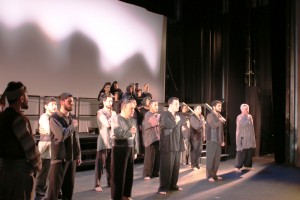 London-based Dance Group Akhtamar, with some very young and enthusiastic performers, relieved the dramatic tension of the epic opera. Choreographer Arsen Zakaryan, especially invited from Armenia, had managed to produce choreographed interludes with harmonious and colourful folk dances that were greatly appreciated by both Armenian and non-Armenian spectators.

It was reassuring for LAO to perform in a jam-packed concert hall on both nights and a considerable number of non-Armenians in the audience – the regulars of Benjamin Britten Concert Hall, local residents as well as professional musicians, who were hearing Armenian music for the first time. LAO bravely showcased Tigranian’s timeless and opulent opera Davit Bek with strong national identity to London audiences.