Long before Baron Pierre de Coubertin, after a nearly 1200-year hiatus, organized the Modern Olympics of “Athens 1896,” the Ancient Olympics that began in 776 B.C. honored countless athletes every four years, including some famous Armenians.

Among them, Prince Varazdat Arshakuni (Վարազդատ in Armenian; Latinized as Varastades), later King of Armenia, was the last known recorded Ancient Olympic victor who won the boxing event at the 291st Olympiad (in 385 A.D.). A memorial plate, now in display at the Olympic Museum in Olympia, Greece, details his win as the most honored champion of the 291st Olympiad. At the 265th Olympiad, 104 years earlier (281 A.D.), another of the famous non-Greek winners (in wrestling) was the Armenian King Trdat III (286-342 A.D), who in 301 A.D. adopted Christianity as the state religion, making Armenia the first Christian nation. The exploits of both kings were chronicled by the Armenian Historian Movses Khorenatsi (Moses of Khoren) in his History of Armenia.

The end of the Ancient Olympics came in 393 A.D., when the Roman Emperor Theodosius I, a convert to Christianity, legally abolished the games as an old “pagan” religious rite. In 1998, the International Olympic Academy installed in Olympia a marble bust by sculptor Levon Tokmajyan, honoring the Armenian King Varazdat Arshakuni (385 A.D.).

The first Armenian Olympic champion of the Modern Olympics was Hrant Shahinyan (1923-96), born in the village of Gyulagarak, who at age 28 competed at the 1952 Helsinki Olympics as a member of the USSR Artistic Gymnastic National Team, receiving two gold medals in gymnastic rings and team combined exercises, and two silvers in gymnastics individual men’s all-around and the pommeled horse. He was also a seven-time USSR and two-time world champion. Among the other Armenian athletes competing alongside Shahinyan—all representing the Soviet Union—were Albert Azaryan and Artur Akopyan.

Armenia was represented as a unified country for the first time at the 1992 Barcelona Olympics as part of the Commonwealth of Independent States (CIS). With only five athletes participating, the team won three gold medals in weightlifting, wrestling, and sharp-shooting. Armenia has been competing as an official independent nation since the 1994 Lillehammer Winter Games.

In recent years, Armenian athletes have succeed mainly in weightlifting and wrestling. In fact, at the 2008 Beijing Olympics, medals awarded were three in weightlifting, two in wrestling, and one in boxing, all bronze.

Armenian President Serge Sarkisian was in attendance at the London Opening Ceremony on Fri., July 27. On Sun., July 30 he attended the Armenian Open-Air Festival, organized by the Diocese of the Armenian Apostolic Church in the United Kingdom and Ireland, in honor of Armenia’s athletes participating in London 2012. He also watched some of the athletes perform on Sat., July 28, including the boxing match for men’s middle (75 kg.) between Andranik Hakobyan and the American Terrell Gausha. Hakobyan was born in Echmiadzin in 1985. As the Americans in the crowd cheered for Gausha, the overbearing cries of “Ar-men-ia” could be heard from the other fans. The match ended in a 3-4 loss after the referee called an end to the contest.

Several other Armenian athletes were competing for countries other than Armenia. Among them, Arsen Galstyan, representing Russia, won that country’s first gold medal—in men’s 60 kg. judo category on July 28, wrestling the gold from the Japanese contender, Hiroaki Hiraoka. The same day, another Armenian in the same category, Hovhannes Davtyan representing Armenia, born in 1983 in Gyumri, was eliminated in an earlier round. Born in Soviet Armenia in 1989, Galstyan was trained at an early age after his move to Russia. His siblings, Arman and Tigran, also compete in the same sport. When asked about his training routine, Galstyan reportedly said, “When I have nobody to train with, I recruit one of my brothers, it seems to me that my victories give them additional stimulation to train and win.”

Famed professional tennis player and former world no. 3 David Nalbandian, who is competing for Argentina, was born in Unquillo, Cordoba Province, Argentina in 1982 to a mother of Italian origin and a father of Armenian origin. He was introduced to tennis as a young boy, playing in a cement court in their backyard built by his Armenian grandfather, and became a professional tennis player at 18. He was eliminated in the first round of the men’s singles and doubles on July 28. His doubles partner was Eduardo Schwank. 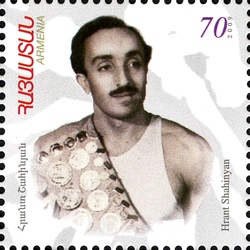 Tvin Moumjoghlian, representing Lebanon in women’s singles table tennis, was eliminated in the preliminary round on July 28. Born in Beirut in 1989, she started playing table tennis at age nine, under the tutelage of her father Raffi Moumjoghlian, a professional table tennis player and Lebanese champion. Tvin Moumjoghlian trained in Vienna for the 2012 London Games and has studied economics at the American University of Beirut.

Also competing on the Lebanese team is sprinter Gretta Taslakian, born in Ghadir, Lebanon, in 1985 to parents of Lebanese and Armenian origin. Her specialty is the running the 200 m. sprint and she has competed in the 2004 and 2008 Olympic Games, as well as in numerous other championships. On Aug. 6 she qualified for 8th place in round 1 of the women’s 200 m. sprint.

An Armenian can also be found on a United States team, but not as a competitor. Adam Krikorian is the head coach of the U.S. women’s water polo team. The team received attention after beating Italy 9-6 in the preliminary round. They’ll face Australia in the semifinals. Krikorian is also the water polo coach at UCLA.

On Sun., Aug. 5, Armenia won its first Olympic medal of the 2012 London Games. The bronze medal was awarded to Hripsime Khurshudyan, who competed in women’s weightlifting +75 kg. Born in Kasakh in 1987, this was Khurshudyan’s first medal awarded at an international competition.

Later in the evening on Sunday, Armenia won its second Olympic medal of the 2012 London Games, this time a silver medal which was awarded to Arsen Julfalakyan, in 74 kg. Greco-Roman wrestling. Born in Gyumri in 1987, he is the son of Armenia’s national wrestling coach Levon Julfalakyan, who won gold at the 1988 Seoul Olympics. Arsen Julfalakyan, who had placed 10th at the 2008 Beijing Olympics, defeated Azerbaijan’s Emin Ahmadov in the semifinal round, but lost to Russia’s Roman Vlasov in the finals. In previous years he won the 2009 European championship, plus a silver and a bronze at the 2010 and 2011 World championships.

On the evening of Monday August 7, Armenia brought its medal count at the London Games up to three, with a bronze awarded to Artur Aleksanyan, born in Gyumri in 1991, in men’s 96kg Greco-Roman Wrestling. Artur defeated Cenk Ildem of Turkey 3-0 in the Repechage Round 2, before out-wrestling Yunior Estrada Falcon of Cuba 3-0 for the bronze. Earlier in the afternoon, one of his team-mates Hovhannes Varderesyan, born in Yerevan in 1989, competing in men’s 66kg Greco-Roman Wrestling, was defeated in Repechage Round 1 by the wrestler Pedro Isaac Mulens Herrera from Cuba.