Celebration of the 24th Anniversary of the Independence of the Republic of Armenia
With Specially Invited Guest Artist, Opera Singer Barseg Tumanyan 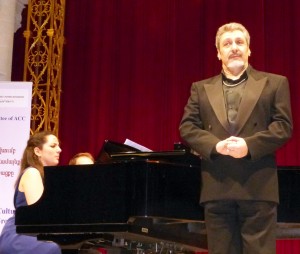 In his introductory speech, Mr. Raffi Sarkissian welcomed the public on behalf of Armenian Community Council of the United Kingdom and extended congratulations for the 24th anniversary of the independence of the Republic of Armenia. 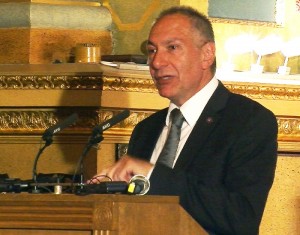 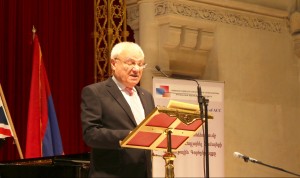 Mr Sarkissian was followed by Dr. Hratch Kouyoumjian, Chairman of the Mihran Damadian Chapter in London, of the ADL (Armenian Democratic Liberal Party – Ramgavar Azadagan), who in his turn, congratulated the people of Armenia, evaluating the significance of the recent independence in the long history of the nation.

The opening speeches were followed by the first half of the gala concert presented by the internationally renowned bass singer Barseg Tumanyan, invited from Astana, Kazakhstan for this festive occasion. He was accompanied on the piano by Kristina Arakelyan, student from the Royal Academy of Music in London, who is not only a gifted piano accompanist, but furthermore, an upcoming composer and talented pianist in her own right.

Maestro Barseg Tumanyan’s musical education started at Yerevan State Conservatory, with professor and famous voice coach Karapetyan. He continued his training with legendary bass Yevgeni Nesterenko at Moscow State Conservatory, and then further trained his voice at La Scala of Milan in the 1980s. Barseg’s performing career started at Armenia State Opera House, where his repertory ranged from roles in West European, Russian and Armenian operas. Since 1980s Barseg Tumanyan has been performing on the most prestigious venues worldwide, and amongst numerous international performances, he has performed the role of Escamillio in Carmen at Opera Houses of Hamburg, Vienna, Opera de Bastille in Paris and Covent Garden in London; and in the role of Ramfis in Aida at Boston Opera. Maestro Tumanyan has toured Australia, USA, Canada as well as Europe with his most famous role as Mephistopheles in the opera Faust. Mr. Tumanyan is currently leading soloist at Astana State Opera House in Kazakhstan since 2014, meanwhile he continues touring as guest singer to the most prestigious opera houses around the world.

London performance of the renowned singer was divided into two sections; in the first section he performed arias from Western and Russian operas, and in the second part Mr. Tumanyan interpreted mainly Armenian traditional and classical music – well acknowledged and appreciated by the audience at St. Yegishe Church.

The opening aria of Maestro Barseg Tumanyan’s recital was Haendel’s “Ah, mio cor”, that instantaneously revealed the multicolour palette of his vocal range as well as his ability to touch hearts with his lyrical interpretation. Mr. Tumanyan’s artistry was likewise palpable in his interpretation of Shakespeare’s 36th Sonnet to Kabalevsky’s emotionally engaging music.

The dominant bass vocal and the artistry of Barseg Tumanyan shone through his interpretation of Russian composer Mussorgky’s playful aria Blokha, reminiscent of the performance of this aria by legendary Fyodr Shaliapin, over hundred years ago.
This first section of the recital concluded by his most illustrious role that had brought the singer international recognition, the aria of Mephistopheles from the opera Faust by French composer Charles Gounod.

After the first half of the gala concert, Mr. Ara Palamoudian, the Chairman of the Armenian Community Council UK, took the stage to extend the Congratulations of the British Armenian Community and of the Community Council, for the 24th Anniversary of the Independence of the Armenian Republic. In his speech Mr. Palamoudian spoke about the significance of the 24th Anniversary when Armenians throughout the world were commemorating the 100th Anniversary of the Armenian Genocide. He reminded the audience that while the Ottoman government planned the annihilation of the Armenian Nation by the Genocide of over 1.5 million Armenians living in the territory of the Ottoman Empire, they did not succeed in elimination either the Armenian culture or its courageous spirit. Armenia revived from its ashes as the First Republic of Armenia in 1918 followed by the Second wholly independent Armenian Republic in 1991 which over the last 24 years has overcome extreme difficulties and has joined the family of respected, peaceful and democratic nations of the world. 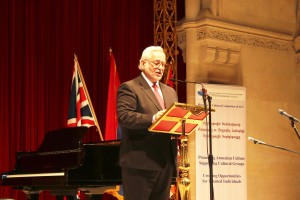 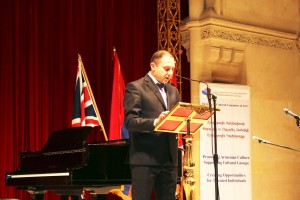 Mr. Palamoudian’s speech was followed by a Response Message from the Armenian Ambassador to the United Kingdom, Dr Armen Sarkissian who was in Armenia on official duties, and the message was read by Mr Tigran Galstyan, Counsellor from the Armenian Embassy in London.

Among the highlights of the second half of the concert were several much loved arrangements of traditional folk songs by Komitas Vardabet, such as Antouni, Apricot Tree and Hayastan. Mr Tumanyan’s interpretation of the popular songs of Komitas, did not comprise fragility and melancholy usually attributed to them, quite the contrary – they sounded more hopeful and magnificent, reminding the audiences of the glorious past of an ancient country and the optimism for its better future. The celebrated Armenian singer also interpreted few arias from Armenian operas by Tigranyan and Tchoukhajian, well suited to his vocal range and the festive occasion. 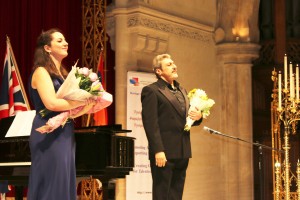 The gala concert dedicated to the 24th Anniversary of the Armenian Independence at St. Yegishe Armenian Church left the audiences overflowing with emotion and joy by the performances of Maestro Barseg Tumanyan and pianist Miss Arakelyan.

The evening was brought to a close with an eloquent speech and words of blessings by the Most Reverend Sargis Movsesyan who represented the Primate of the United Kingdom and Ireland, His Grace Bishop Hovakim Manoukyan who was in Holy Etchmiadzin to take part in Church Ceremonies at the Holy See.