Commemoration of the 105th Anniversary of the Armenian Genocide (UK)

1.) Fri 24 April, 11.00 AM – 12.00 PM – Remembrance service to commemorate the 105th anniversary of the Armenian Genocide at St. Yeghiche Armenian Church, followed by wreath-laying ceremony at the memorial khachkar. The service will be streaming live on https://www.facebook.com/ArmenianChurchofUKandIreland/ and https://www.facebook.com/styeghiche and on sister platforms. Note: Closed Door event, no admittance.

2.) Fri 24 April, 12.00 PM – By the order of HH Karekin II the Catholicos of all Armenians, Armenian churches throughout the world will sound their bells, in commemoration of the lives of the Holy Martyrs.

3.) Fri 24 April, 8.30 PM – Candle lighting appeal – The organising committee requests that all Armenian families and friends light a candle, placing it at their front window (visible from outside) in remembrance of the victims of the Armenian Genocide. This is an initiative arranged in Armenia and several other Armenian communities elsewhere.

4.) Fri 24 April, 6.00 PM – Video streaming of Community Commemorative Event. This would include messages from The Holy See by HH the Catholicos of All Armenians, brief speeches by representatives of The Primate of Diocese of the Armenian Apostolic Church UK and Ireland, The Charge de Affairs of Armenian Embassy to the UK and the UK and the Chairman of Armenian Community Council UK, including cultural and other programmes dedicated to the Armenian Genocide. View on FB.

5.) Virtual ‘march’ – an appeal for members of our community to photograph themselves ‘walking’ in their garden, street, home, etc, and email the picture to april2020@crag.org.uk by 23 April 2020. Post the photo on social media including the hashtags #ArmenianGenocide #Ourmarch #stepstorecognition. Pictures received will be edited to create a collage of a virtual ‘match’ for April 2020, to be displayed across social media.

6.) AYF London Խանասոր – #StepsToRecognition – a social media campaign already launched on Facebook and other platforms, encouraging people to go on a 10,000 steps walk ‘march’ as individuals or family while respecting the requirement for social distancing, taking pictures and posting them on social media.

7.) April 2020 – Focused discussion on the Armenian Genocide with the participation of representatives from the younger and older generation of Armenians (lasting around 10 minutes). The recording will be placed on YouTube and other social media platforms.

10.) Article by Raffi Sarkissian “Adolf Hitler and Atatürk” -about the political atmosphere in Germany during 1930s and Adolf Hitler’s admiration of Mustafa Kemal Atatürk and his influence in German politics and culture, including Hitler’s references to how minorities were dealt with as a result of Pan-Turkish policies and documentary photographs.

11.) Article published by KCW Magazine, circulated in Westminster, Kensington & Chelsea and Fulham. This was an initiative of the Armenian Embassy to the UK. Link: https://www.kcwtoday.co.uk/2020/04/a-commemoration-of-armenia/

12.) Armenian Community in Dublin – have postponed their commemoration events to December 2020, during the 5th anniversary of the memorial khachkar in Dublin. 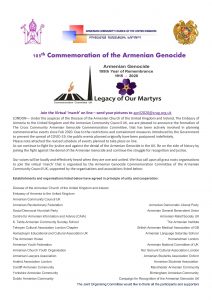 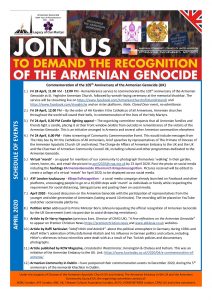