Armenian culture in Turkey: From the ashes 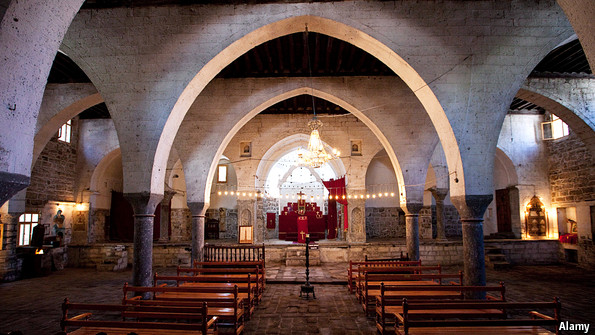 A DAINTY silver slipper, a hand-engraved copper bowl. Silva Ozyerli, an ethnic Armenian, runs a loving finger over these and other family treasures strewn across her dinner table in Istanbul. They are due to go on display at a new museum of Armenian culture in Ms Ozyerli’s native city of Diyarbakir at the end of 2013.

The Armenian museum, the first of its kind in Anatolia, will be part of the newly restored Surp Giragos church complex (pictured). Its aim is to chronicle Armenian life in Diyarbakir, in Turkey’s mainly Kurdish south-east, before 1915. That was the year when Ottoman troops and their Kurdish accomplices began slaughtering over 1m Armenians and other Christians across the country during what many historians say was the first genocide of the 20th century.
Turkey denies that mass killings took place, insisting that the Armenians had perished from hunger and disease during their forced march to the deserts of Syria. (The Ottoman government deported the Armenians, notionally for their safety, as the empire collapsed. Yet thousands were massacred as they marched, and countless others were killed before they set off.) Local school textbooks perpetuate this myth.

Granting permission to restore Surp Giragos is seen as part of a larger government campaign to placate diaspora Armenians, who have been lobbying governments around the world to recognise the genocide. When Surp Giragos reopened in 2011, after lying in ruins for more than 20 years, it became Turkey’s first church to be revived as a permanent place of worship.

“The museum is a way of showing that thousands of Armenians contributed to the city’s wealth and culture,” explains Ergun Ayik of the Surp Giragos Foundation, which runs the church. “People will look at the photographs, the objects, and wonder where did all these people go?”

Around 2m Armenians are believed to have lived in Turkey before the genocide. Now there are about 70,000. Survivors are scattered across the Middle East, Europe, America and Australia. Many more converted to Islam to carry on, but their numbers remain unknown. Osman Koker, a Turkish historian, reckons that more than half of Diyarbakir’s population used to be non-Muslim, mainly Armenian Orthodox, but also Catholic, Syrian Orthodox and Jewish. “Now”, says Mr Koker, “there is practically none.”

Yet a growing number of Turkish Armenians are reclaiming their heritage. In 2010 hundreds flocked to the island of Akdamar in the eastern province of Van to attend an inaugural mass at the newly restored Church of the Holy Cross. (The church is now a museum, but holds mass on religious holidays.) Turkey’s culture ministry has obliged with a list of other ancient churches that it plans to restore, says Osman Kavala, a Turkish philanthropist who is helping to promote Turkish-Armenian reconciliation. And Armenian-language lessons, available since last year in Diyarbakir’s historic Sur district, are increasingly popular among Turkey’s so-called “invisible Armenians” who had abandoned their culture in order to survive. Abdullah Demirbas, the district’s mayor, argues that the Kurds must also make amends for their complicity in the genocide.

Armenians applaud these efforts, even as they note a persistent strain of Turkish nationalism that perceives non-Muslim minorities as suspect. The government’s conversion of several Greek Orthodox churches into mosques, together with its recent espousal of unabashedly Islamist rhetoric, heightens some concerns that efforts to appease Armenians are cynical and short-sighted.

But such worries were pleasantly absent during a recent afternoon in Surp Giragos, as tourists gazed at the church’s repaired altars and onion-domed belfry (which had been destroyed by the Ottomans in 1916 because it dwarfed surrounding minarets). The church is drawing hundreds of people every day. “Many of them are Islamised Armenians like me,” laughs Gafur Turkay of the Surp Giragos Foundation. “The truth about 1915 cannot be concealed,” says Mr Ayik’s daughter Pelin. “But as a young Armenian I don’t want to be pitied as a victim. I am the proud torchbearer of a rich civilisation that not only has survived but continues to thrive.”

From the print edition: Books and arts