Alchemy near the Chasm of Death: Visiting a Mass Grave of the Armenian Genocide

“They brought the Armenians here. Thousands of them. They stripped them of their belongings and threw them into the chasm.” Chasm appears as dark

“They brought the Armenians here. Thousands of them. They stripped them of their belongings and threw them into the chasm,” explains a Kurdish villager who had spotted us while driving by.

We are standing at the mouth of a deep, eerie cleft—bottomless, according to the locals—called Dudan by Armenians and Kurds for centuries (also known as Yudan Dere).

“How do you know the Armenians were killed here?” I ask.

It’s not that I’m skeptical. We know from various survivor and perpetrator accounts that the Armenians of Chunkush—around 10,000—were led here by gendarmes and armed chetes in 1915, brutally murdered, and hurled into the chasm.

He pauses. “Everybody knows.”

That’s when we realize it: Everybody knew. In Chunkush, one of the locals, a teenager, had given us directions to Dudan where, he said, the entire population of the almost exclusively Armenian village had perished.

As we were driving in that direction, we asked a man where Dudan is. He jumped into our van and led us there. When we got to Dudan, our driver, a Kurd from Diyarbakir, asked him, “What happened here?”

“Nothing,” the man murmured.

“They say something happened to the Armenians here,” the driver insisted. 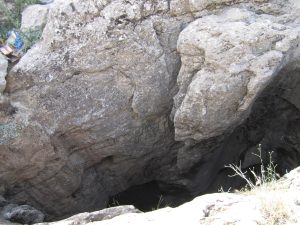 Dudan is “a famous cavern [that] drops vertically downward several hundred feet. The entire population of the town [of Chunkush] were said to have been driven to their death in this cavern.” (Photo by Khatchig Mouradian)

At that point, the man became visibly angry. “I do not know,” he said, and stormed out of the van.

The murder of the Armenians of Chunkush constitutes one of the largest, most brutal in situ massacres of the Armenian Genocide. The Armenians from Chunkush were marched to Dudan—only two hours away by foot—and massacred on the spot. Historian Raymond Kevorkian writes:

“The males were dealt with first, in accordance with a classic procedure: tied together in small groups of fewer than 10, they were handed over to butchers who bayoneted them or killed them with axes and then threw the bodies into the chasm. The method used on the women was quite similar, except that they were first systematically stripped and searched and then had their throats cut, after which their corpses were also thrown into the chasm. Some of them preferred to leap into the abyss themselves, dragging their children with them; thus they cheated their murderers of part of their booty.”1

In his memoir, Rev. Henry H. Riggs, an American missionary who served in Kharpert (Harput), describes Dudan as “a famous cavern [that] drops vertically downward several hundred feet.” He adds, “the entire population of the town [of Chunkush] were said to have been driven to their death in this cavern.”2

Almost no one survived. The massacre was so comprehensive that “not a single Armenian from Chunkush appeared on the bloody deportation routes…in Aleppo, Der Zor, Damascus, or any part of Arabia,” writes Karnig Kevorkian in his 600-page book on Chunkush.3 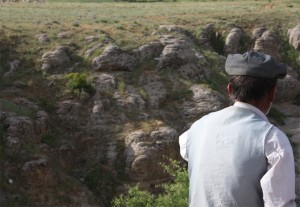 At that point, the man became visibly angry. “I do not know,” he said, and stormed out of the van. (Photo by Nanore Barsoumian)

“This place smells of death,” says George, one of my co-travelers. “I can’t stay here any longer.” He walks towards the van, leaving me and my colleague, Nanore, behind.

I myself have never felt any closer to what can best be described as a doorway to hell. We take pictures, record a video of the site, and start surveying the area—just in case.

As we walk back, the Kurdish villager approaches me and, hesitantly, mutters: “Can I ask you something?”

“Sure!” I say, as I continue walking.

“My grandfather found a lot of items. They belonged to Armenians…”

“Well, people in my village say these items were all made of gold, but that when they were found, they turned into copper.”

I am confused. “Really?”

“Yes, yes. That’s what they say. They also say that if someone can read the Armenian inscriptions on them, they will turn back to gold.”

I am dumbfounded. But I ask him to continue.

“So I was wondering,” he says, “whether you’d be willing to read them for me.”

Of all the possible responses pushing each other in my mind, trying to come out in words, I opt for the most diplomatic one. “I doubt that I have such powers, but bring them!” 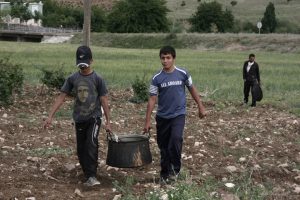 After a few minutes, we see a man, a woman, and several kids with loads of tools and copper and silver trays and utensils walking in our direction… (Photo by Nanore Barsoumian)

The Kurdish villager takes out his cell phone and makes a call. He then asks us to get back into the van and follow him. I tell my co-travelers about our conversation.

We hop into the van and follow his car. A few minutes later, he pulls up near a field. We get off, still suspicious, and wait for him to make another phone call.

After a few minutes, we see a man, a woman, and several kids with loads of tools and copper and silver trays and utensils walking in our direction…