Akcam: The ‘Foreign Connection’ is Me

The Turkish version of this article appeared on T24 on June 6, 2013. The Armenian Weekly thanks Fatima Sakarya for the English translation. 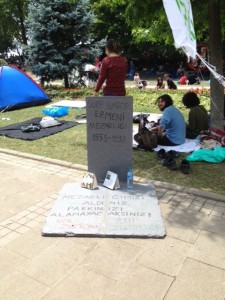 Commenting on the Gezi Park events, Prime Minister Erdoğan said, “There are internal and external connections. Our intelligence work is ongoing.” Confession time: The foreign connection is me. Anyone who’s got doubts, take a look at my entry and exit dates: I entered Turkey on May 28 and it all started. I was in Taksim Square every day. I was involved in all sorts of necessary planning to ensure that the events escalated (unfortunately, I’m not at a liberty to disclose exactly what). When it started to become clear what the whole operation was about, I returned with the satisfaction of having performed my duties well. Since the operation has achieved its purpose, there’s no harm in my revealing the truth here. Our intelligence officers will have no difficulty finding my internal and external connections, but there’s no point in wearing them out more than is necessary, right?

As you can guess, the ones who sent me simply couldn’t tolerate the fact that Turkey had become so powerful in such a short time. In fact, these events were planned way in advance. During the past few years, Turkey made some really bold, unexpected moves; it strengthened its economy and by breaking the military’s guardianship over politics, it proved that it isn’t some banana republic, instead gaining a respected place among the nations of the world. For those outside forces that sent me, Turkey’s increasing power undermined their own influence in the region. Their purpose was to show Turkey—which had embarked on a path of quickly becoming a great power in the region and had gained so much respect in the world—a lesson. It was simply unacceptable that Turks could operate in Syria freely, go about changing regional dynamics without asking for anyone’s permission, and then rock the boat in the region by coming to an agreement with the Kurds.

Certainly they could have used other incidents as an excuse to teach Turkey a lesson: Uludere, Reyhanli, the liquor sale prohibitions, or the new Bosphorus bridge that’s to be named after Yavuz Sultan Selim… They could have used any one of these. But then Turkey would never have been able to get past the existing, deeply-rooted polarization. If they had used any one of these incidents the protesters would only be from a certain segment of society and those segments would be accused of being manipulated by outside sources. For example, if the liquor prohibition had been used, they would have claimed that Ergenekon sympathizers were behind the activists, and the plan would not have worked. For that reason, Taksim and Gezi Park were chosen. As a result, the PKK and MHP followers, secularists, Alewites, devout religious people, Ergenekon sympathizers, and liberals all came together. This served to belie the credibility of the argument that the actions were being stoked from outside. You know, it’s one thing to claim that a single group is being manipulated by outside forces, but making that claim for all groups? Now that would be a hard sell.

Even if the movement starts to lose steam, those who have sent me have achieved their goal. They’ve already scored a huge success. Besides, if the government doesn’t get the message, the events will continue. The Turkish economy will be badly hit, tourism will suffer. As a result, it’s going to become impossible for Turkey to act independent of the wishes of these powers, challenging them in the region and in the world. Like I said, no matter how you look at it, this is a perfectly planned action….

Now I’m guessing that everyone reading these lines is asking, “So, why would you accept a job like this? Why take part in a plan that aims at weakening Turkey and undermining its influence?” The answer to the question is directly related to the subject I study. Because of past experiences, I hold a personal grudge against the Turkish government. I knew that the best way to exact revenge would be to get involved with the whole “genocide lie”; so I picked that subject. Besides, by bringing up the genocide issue for years, I’ve endeavored to weaken this state.

Unfortunately all the things that I’ve been saying and writing weren’t very effective. For that reason, I determined that the chance to take part in this action was an opportunity I couldn’t miss. After all, Gezi Park used to be an Armenian cemetery. The cemetery grounds actually covered what is now Harbiye [1] and the Divan Hotel too. If the action is successful not only will I gradually, without scaring anyone, be able to put the genocide on the agenda, but I’ll be able to tell everyone that these lands belonged to the Armenians and that they need to return and claim them. As a matter of fact, a memorial has already been planted in the park declaring that it used to be an Armenian cemetery. One of the streets in the park has been named after Hrant Dink. As a result I’ve managed to carry out my own plans. For this reason, I accepted the job with pleasure.

Will there be anyone who believes the scenario I’ve presented above? I know you’re going to say that if the government wants it, many people will believe in it. There are plenty of people who are convinced that countless events in Turkey’s past occurred as a result of conspiracies planned by those who are against our country and our nation. I don’t know to what extent the AKP and Erdoğan will take advantage of this deeply-rooted mentality, but what I do know is that believing in this sort of rubbish leads to the bankruptcy of democratic culture. I still harbor hope that Gezi Park will cause these nutty, nonsensical conspiracy theories to be thrown into the trash bin, particularly after an open debate about the true history of Gezi Park.

Yes, how can we memorialize the Armenian presence on these lands that used to hold an Armenian cemetery? What is it going to be like for a Turkey that is born anew from its ashes to re-create and remember its own history?

[1] The military headquarters in Taksim.