The first official flight from or to the Nagorno-Karabakh Republic’s (NKR) airport that has been repeatedly delayed during the past year or so is likely to be delayed for “a little longer” despite the announcement that the facility has already been “certified” to start operations. 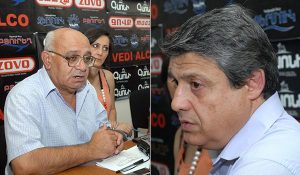 Official reports several days ago said that the first flights from and to the airport near Stepanakert would start this week. But in an interview with ArmeniaNow on Monday chief of the NKR government-affiliated civil aviation department Dmitry Adbashyan again avoided giving a precise date for the official commencement of flights.

“On September 28, we received an official certificate about the airport corresponding to international standards and the right to service flights. Aircraft can land and take off from our airport,” said Adbashyan, adding that the operation of the airport is very important for Karabakh. “As an aviator, I think that if a country has no airport, then it cannot have a full-fledged state.”

The airport situated about 10 kilometers from NKR capital Stepanakert was built in 1974 mainly to service flights from Yerevan and Baku. It was turned into a military airfield during the early stage of the armed conflict in Karabakh. The facility in fact has been idling since 1992.

In 2008, architect Tigran Barseghyan and his team started designing the main building of what would become the new air gate of Karabakh – in the shape of an eagle with open wings.

The architect says that the quality of construction is high and work was completed according to schedule. The runway was broadened and several hills adjacent to the runway were flattened for modern big aircraft to be able to land and take off.

“About $5 million has been spent for the implementation of complex work, and today as a facility the airport is ready for flights. But the delay has been for different personnel-related, organizational and technical matters, which are beyond the scope of design or construction-related issues,” says Barseghyan. The architect adds that solutions provided for in the long-term design of the airport make it suitable also for servicing international flights.

The airport building that occupies a total area of 1,200 square meters will be able to accept 100 passengers per hour.

Flights are due to be carried out by the Artsakhavia state-run enterprise. Initially the airport plans to service flights from Yerevan to Stepanakert and back. Such a journey in one direction will take about 35 minutes, and airfare will be approximately 15,000 drams (about $38).

The official opening of the airport was supposed to take place still on May 9, 2011, but it was delayed several times over what officials explained were “purely technical reasons”. Still, many believe that there are political reasons behind the delay, in particular the uneasy relations with Azerbaijan that has threatened to shoot down civilian planes that appear in the airspace it believes to be its own.

But political analyst Levon Shirinyan thinks that Azerbaijan won’t be able to do anything to stop the airport from operating. “It will go on fuming and try to prevent the airport from opening, but after it opens, it will be unable to do anything,” he says. Still, Shirinyan says, the threats from Azerbaijan need to be properly assessed and counteraction should be taken.

“The Artsakh Defense Army should be put on high alert. It is a war of nerves. The side that manages to break the opponent’s will, will be able to solve the problem,” says Shirinyan, adding that the airport will surely be put into operation if such an announcement has been made.

The analyst thinks that today is the most opportune moment for the airport to be put into operation considering the tough steps taken by Armenian diplomacy in the wake of the “Safarov Affair” in Azerbaijan.

Official Yerevan has sought an international condemnation of the Azerbaijani leadership for the public glorification of a confessed killer of an Armenian, Ramil Safarov, who was granted pardon in Baku on August 31 shortly after being extradited from Hungary where he had been serving a life sentence for axe-murdering an Armenian colleague at a NATO-sponsored language course.

Armenian Foreign Minister Edward Nalbandian spoke about the Safarov Affair from the high tribune of the United Nations in New York on October 1, arguing that Azerbaijan is encouraging hatred towards Armenians at the highest level of its leadership.