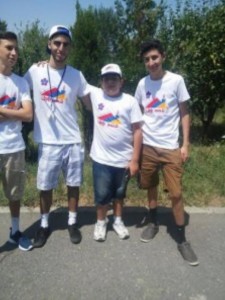 The fourth stage of the “Ari Tun” Program is being held with the participation of 153 young Armenians from 10 countries around the world, including Russia, the USA, Syria, Georgia, Uzbekistan, Jordan, Ukraine, Iraq, the Netherlands and Spain.

Levon Tadevosyan is from Tashkent, Uzbekistan. He is visiting the homeland for the first time. It’s impossible not to notice this happy and active boy. He is talkative and loves to tell jokes, but at the same time he’s smart and modest. Levon feels excited and gets emotional when talking about Armenia. “I had only seen Armenia in pictures before my visit. I really wanted to come and see all that was beautiful and attractive from the distance, and now I’m here. I could only dream of the opportunity that has been provided. I’m more than grateful to the organizers of the “Ari Tun” Program. It’s simply wonderful. Words can’t describe it.”

For the past three days, the youth with different values and cultures have been spending most of their days together. They have already gotten to know each other and have become good friends. Levon has especially become close friends with Eric from Los Angeles and Andranik from the Ukrainian city of Kharkow.

Even today, during the visit to Sardarapat Memorial, the clever boy came up with a way to beat the heat. Despite his friends’ desires, he watered them near the entrance to the museum. The boys treated Levon like their younger friend and didn’t take the little mischievous boy’s act seriously.

Unfortunately, Levon is the only participant from Uzbekistan, but I wasn’t able to talk to him for a long time. The active and energetic boy was trying to be everywhere at once and was trying not to miss anything. At the end, he promised to share his impressions with his friend, David after returning to Tashkent. He’s certain that his friend will regret not spending his summer in a warm and vivid atmosphere.